The Transhumanist Wager: In Favor of Eugenics & Technological Dictatorship

Zoltan Istvan is an American-Hungarian philosopher, journalist, entrepreneur, and futurist. He has explored over 100 countries—many as a journalist for the National Geographic Channel—writing, filming, and appearing in dozens of television stories, articles, and webcasts. He also pioneered and popularized the extreme sport of volcano boarding. Zoltan later became a director for the international conservation group WildAid, to stop illegal wildlife trade in Southeast Asia. He recently published The Transhumanist Wager, a controversial fictional thriller describing apatheist Jethro Knights and his unwavering quest for immortality via science and technology. As a leading transhumanist, Zoltan presents his reasons for being in favor of humanity merging with machine. He’ll discuss his view that technology will improve on nature. Overcoming morality is his greatest concern. We’ll discuss body harm from new technologies and the ethical dilemmas they present. Zoltan argues that ultimately technology will be helpful to the “greater good” and must be implemented, even if by force and even if there are causalities along the way. In the second hour, Zoltan philosophizes about technology as evolution and luck as the prime mover of the human experience. He talks about maximizing on the transhumanist value for the evolution of our species. We parallel transhumanism with religious thinking. He’ll speak in favor of controversial subjects such as a transhumanist dictatorship, population control, licenses to have children and people needing to justify their existence in front of a committee, much like the Fabian Socialist George Bernard Shaw’s idea. He says we must use the expedient method to lead to the transhumanist society. At the end, Henrik talks about covert eugenics and ties it into technology. 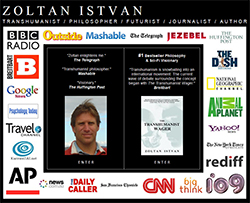