Feb 19, 2016
Bob Whitaker is running for president on the American Freedom Party (AFP) ticket. He has been a college professor, international aviation negotiator, Capitol Hill staffer, Reagan Administration appointee, and writer for the Voice of America. Whitaker has written numerous articles and three books, and is perhaps best known for being the creator of The Mantra, a strategy to fight White Genocide. Tom Bowie is the AFP Vice Presidential running mate. He has been a member of the US Marine Corps and the Maryland Defense Force. Bowie formed a STAR (State Tactical and Response) Team, chartered an Explorer troop under the Boy Scouts of America, and has worked with the State of Maryland Department of Health as a Health and Safety Specialist and a Special Police Officer.

The AFP candidates join us for an overview of the party’s running platform, which is centered on stopping the immigration invasion, fighting White genocide, and conquering cultural Marxism. Bob talks about the development of The Mantra, a tool of repetition aimed at leveling the field of free speech in America and taking on the thought police who work diligently to squash conversations about the anti-White scam chipping away at the country’s foundations. We discuss how the party is addressing the so-called “race problem” in America by hammering away at the mantras of “Diversity = White Genocide” and “Anti-Racist is a Code Word for Anti-White,” and we get into the controversial banning of billboards across the country. Tom talks about the true definition of white genocide and the skillful word spinning tactics the political elite use to promote “diversity” while detracting from the agenda of doing away with the White race.

In the members’ half, we look at the central issue of the US government turning against the best interests of its own people, and how Donald Trump is riding the wave of discontented Americans fed up with anti-White politics. Bob and Tom explain how a 3rd party can use the state election process to its advantage to grab ballot ticks from the huge chunk of independent voters that are disgusted with the system and ready to hitch on to a revolution. We weigh up the crumbling components of the Democrat vs Republican system and tired cuckservative campaigning schemes. At the end, the AFP campaign manager Laura Fitz-Gerald comes on and informs folks how to get involved in the upcoming primary elections.

whitakeronline.org/blog
robertwwhitaker.com
theamericanfreedomparty.us
About Bob
A Plague on Both Your Houses
Genocide Convention
George Wallace
Ross Perot
Bill Kristol: ‘We’ll Have to Start’ New Party If Trump Wins Nomination
Barack Obama: 'We are and always will be a nation of immigrants'
Learning how white people ruin the world
Presidential candidates: South Carolina, here we come

Hail to the Chief 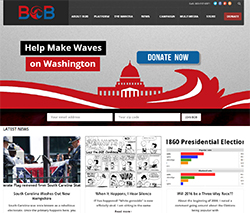