Why Diversity is a Lie

Jul 6, 2015
Tim Murdock is the host of White Rabbit Radio and the voice of Horus the Avenger. He is behind the widely circulated memes, "Diversity is a code word for White genocide" and "Anti-racist is a code word for anti-White." He has also produced the popular animations "How Whites Took Over America," "Anti-Racist Hitler," and "Johnny Racist." Tim returns to Red Ice Radio for another look into the ridiculous double standards of diversity. He begins with a detailed definition of the broad term of "genocide" and links these points to explicitly stated agendas of certain power elites seeking to achieve the disappearance of specific ethnic groups and the eradication of particular ethnically pure states. We discuss the very public proclamations of EU officials that blatantly reveal the war being waged against Whites and ancient European cultures. Further, we consider how Zionists are using technology and psychological warfare to deliberately modify the behavior of Whites, and we look at the increased questioning of suspicious politics and open border policies that are alerting even the mainstream to the anti-White scheme. In the second half, we discuss the breakneck speed of the demographic restructuring taking place in the west and how this is ultimately bringing about the swift destruction of the mental wall that has kept many Whites from seeing the larger agenda of mass immigration. We look at the recent Charleston church massacre in relation to the collective tension resulting from the forced absorption of non-Whites into Western civilization. Tim underscores how the powers that be are being undermined by their own insane policies, which appear to be part of the execution phase of an aggressive and drastic plan to take ownership of everything on the planet. At the end, we reflect on the crazy practices of anti-White Whites and the identity politics that have predominately White countries in a state of arrested development. 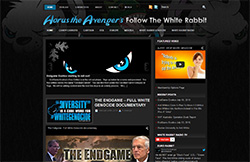