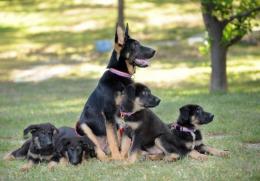 Trust, Solace, Prodigy, Valor and Dejavu in Los Angeles, California to present the cloned puppies of Trakr, a German shepherd, who sniffed out survivors from under the rubble of New York's World Trade Center after the 2001 terror strikes. Trakr was cloned in South Korea under the direction of Doctor Hwang Woo-Suk. AFP PHOTO / GABRIEL BOUYS

James Symington, a former Canadian police officer, choked back tears as he formally took possession of the five descendants of his beloved German shepherd named Trakr, who died in April.

Symington was presented with Trakr's offspring after winning a competition organized by California firm BioArts International -- the "Golden Clone Giveaway" -- to find the world's most "cloneworthy" dog.

Symington said he hopes the puppies -- Trustt, Valor, Prodigy, Solace and Deja Vu -- will go on to follow in Trakr's footsteps.

"We're here to celebrate that Trakr's legacy lives on in these five beautiful puppies," he told reporters. "If they have the same attributes Trakr did, then hopefully they'll develop into world class search and rescue dogs."

Symington and Trakr arrived at the site of the World Trade Center collapse, commonly referred to as Ground Zero, on September 12, 2001 and were one of the first K9 search and rescue teams on the scene.

After working nearly non-stop for 48 hours, Trakr located the last human survivor found in the rubble of the twin towers.

"Trakr was an extraordinary search and rescue dog. His work at Ground Zero was the culmination of his career," Symington said.

Hawthorne defended the right of people to clone their dogs instead of obtaining new pets from rescue shelters.
"I think 99 percent of the time people should get their pets from shelters," he told AFP.

"But can we agree though that one percent of the time if you have a one in a million dog and you have the money to pay for it, you should be able to go to either a breeder or a cloner?"

Hawthorne said Trakr had been chosen for cloning because of his heroics on 9/11. "We received many very touching submissions to our contest, describing some truly amazing dogs," he said. "But Trakr's story blew us away."

Symington meanwhile said that one member of his new litter -- Trustt -- was an exact replica of Trakr.
"The physical similarities are uncanny," he told AFP. "He's the spitting image of the Trakr that I first met in 1995. He has exactly the same markings, the way he moves, everything. Very alert, very intelligent and intuitive.
"I respect that cloning's not for everyone. But there are few dogs that are born with extraordinary abilities and Trakr was one of those dogs," he said.
"I look forward to the day that these puppies can follow in Trakr's footsteps and play an important role in other rescues, like Trakr did."