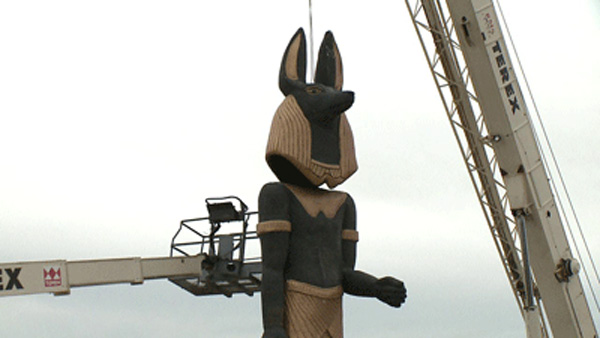 Ever since it was first installed at Denver International Airport, the 32-foot-tall blue "Mustang" has been the talk of the town, but a new addition is sure to get plenty of attention.

A crew is installing a seven-ton, 26-foot-tall concrete sculpture of an Egyptian god at the airport.

Anubis, a statue with a jackal-head, will be built south of the Jeppesen Terminal.

Although part of the lore of the 9,000-pound "Mustang" is that its creator, Luis Jiménez, was tragically killed while making the piece, Anubis may be even more notorious. He's the Egyptian god of death and the afterlife.

It's being put in to preview the Denver Art Museum's King Tut exhibit.

The exhibit runs June 29 through Jan. 9, 2011, and Anubis will be standing guard during that time.

First Piece Of King Tut Exhibit On Display At DIA

The big King Tut exhibit doesn't open at the Denver Art Museum until the end of the month, but the first piece is already on display, standing tall outside Denver International Airport.

It is an exhibition of royal artifacts thousands of years in the making and it's never been seen in Denver before and will never be again -- "Tutankhamun the Golden King and the Great Pharaoh."

One of the biggest sculptures from a new exhibit of ancient Egypt was unveiled Wednesday at the airport to kickoff the event. In a mere 27 days Denver will go Tut crazy.

The installation of the 7-ton, 26-foot tall statue of Anubis took place at the south end of the DIA terminal. Anubis was the ancient Egyptian god of the afterlife.

"It's an exhibition of about 100 objects, both from King Tut's tomb, and 2,000 years of ancient Egyptian history. And it really walks people through what pharaohs' life was like, what families' life was like; and then you'll actually go down some stairs and into a space that's basically a replicated tomb of King Tutankhamun and see about 50 or so objects from the King's tomb," Kristy Bassuener with the Denver Art Museum said.

The polyurethane and steel structure took some time and effort to build. The wind blew it around and a crane got stuck in the gravel, but Anubis would not be denied.

"These objects are incredibly important. They very rarely travel outside of Egypt. They are priceless treasures from long ago," Bassuener said. "This is the first time King Tut's treasures have ever been to the Rocky Mountain region."

And now with Anubis in place the countdown begins toward a 6-month, once-in-a-lifetime exhibit filled with treasures never before seen and never to be seen again.

The statue of Anubis is right in front of the windows at the south end of the main terminal at DIA.

The exhibit opens on June 29 and runs through Jan. 9.