A Knot of Light 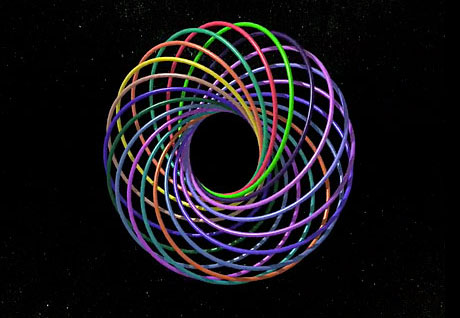 Fibration
The torus can be covered with circles that wrap around the both the outside of the donut and through its hole.
www.dimensions-math.org
Video available here

Imagine twisting a beam of light into a knot, as if it were a piece of a string. Now grab another light beam and tie it around the first, forming its own loop. Tie on another and another, until all of space is filled up with loops of light.

Sounds preposterous, but a pair of physicists has shown that light can do just this — at least in theory. Visible light, along with all other forms of electromagnetic radiation, is governed by Maxwell’s equations, and the researchers have found a new solution to these equations in which light forms linked knots. The team is now working to create light in this form experimentally.

It’s too soon to know what the applications of knotted light will be if they succeed, but possibilities include solving one of the problems that make it difficult to produce power from nuclear fusion and manipulating flows in an exotic state of matter called a Bose-Einstein condensate. 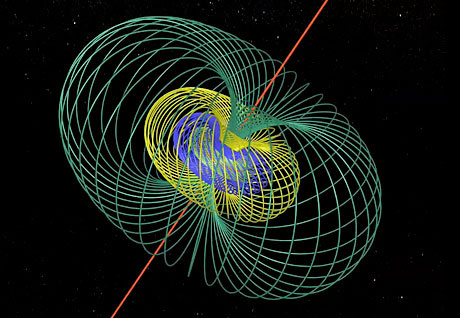 “This is very exciting,” says Antti Niemi of Uppsala University in Sweden, who is unaffiliated with the research. “If an observation is made where one sees stable knots in light, that would also tell us a lot about the mysteries of fundamental forces that we still do not understand.”

The story begins with a mathematical discovery in 1931. Heinz Hopf found a way of filling up all of space with circles. (More precisely, he made a map from the analogue of a sphere in four dimensions to the circle.) He started with a donut shape, which mathematicians call a torus. He imagined taking a piece of string and wrapping it smoothly around the torus so that the string passes through the “donut hole” once and around the outside once as well. Enough pieces of string placed alongside this first one could cover the entire surface of the torus.

Now he just had to fill all of space with tori. He packed them like Russian dolls, extending forever both inward and outward from the starting torus. The smallest torus would be so skinny that it would simply be a circle. The biggest torus would be so fat that the “donut hole” on the torus wouldn’t be a hole at all — it would form a line extending up so far that its two ends would meet only “at infinity.” By filling space with tori and covering tori with circles, Hopf put every point in space on some circle. 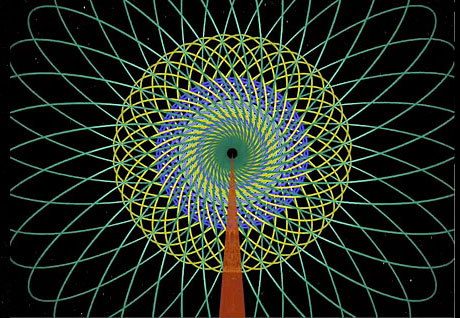 Another VIew
A different view of the Hopf fibration.
Video available here

Mathematicians were excited about Hopf’s discovery (called the “Hopf fibration”) because it showed that high-dimensional spheres were more complex than imagined. But it wasn’t until 20 years ago that physicists realized the Hopf fibration had implications for electromagnetism: Antonio Fernández-Rañada of Complutense University in Madrid used the Hopf fibration to create a new solution to Maxwell’s equations, and thus an example of how electromagnetism can work. He was in search of a way to build a quantum theory for light without using quantum mechanics. He used the Hopf fibration, but did not consider whether, in an experiment, light could actually be forced to follow the circular paths.

William Irvine of New York University and Dirk Bouwmeester of the University of California, Santa Barbara stumbled across Rañada’s work around 10 years ago and realized that it might describe a form light could actually take. “The main thing we did is that we took this solution seriously,” Irvine says. The pair figured out how to turn Rañada’s solution into something that might conceivably be produced in the laboratory.

Irvine and Bouwmeester show theoretically that the shape the light rays formed would distort over time, with the individual torus shapes becoming twisted and misshapen. The individual loops the light would follow would also grow larger over time.

In special situations, however, the loops might be stable, such as if light travels through plasma instead of through free space. One of the problems that has plagued experimental nuclear fusion reactors is that the plasma at the heart of them moves faster and faster and tends to escape. That motion can be controlled with magnetic fields, but current methods to generate those fields still don’t do the job. If Irvine and Bouwmeester’s discovery could be used to generate fields that would send the plasma in closed, non-expanding loops and help contain it, “that would be extremely spectacular,” Bouwmeester says.

Rañada, whose work Bouwmeester and Irvine expanded upon, is excited about their discovery. “They’ve done outstanding work,” he says, “which most probably will have some surprising consequences.”