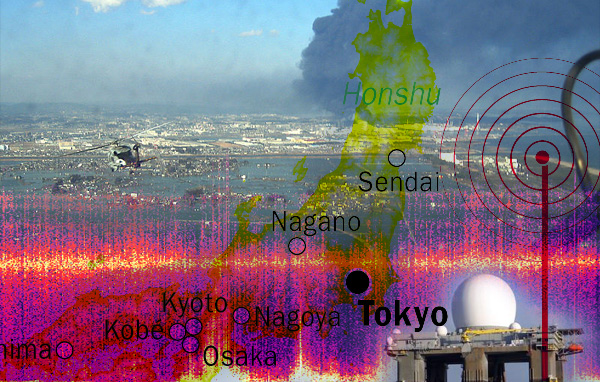 Ed comment: We received the following article via email, we also decided to keep the initial comment made by the sender.

This article below the Induction Magnetometer graph proposes the hypothesis that radon released from the stressed tectonic plate caused the heating of the atmosphere. The HAARP technology is known to be capable of heating the atmosphere. There is a mobile version of HAARP that looks like a very large oil platform and which is operated by the US Navy. The US Navy fleet was in this general region prior to the Japan earthquake. Could a HAARP-like technology have been the source of heating of the atomosphere? The ELF (extra low frequency) waves at 2.5 hertz (cycles per second) are known to be a harmonic associated with earthquakes. The HAARP magnetometer readings at the peak temperature readings below were very active in the 2.5 hertz band. You can change the date to see the adjacent days' activity of the HAARP magnetometer. My own suspicion is that the Dr. Strangeloves of the world are having their way with us. 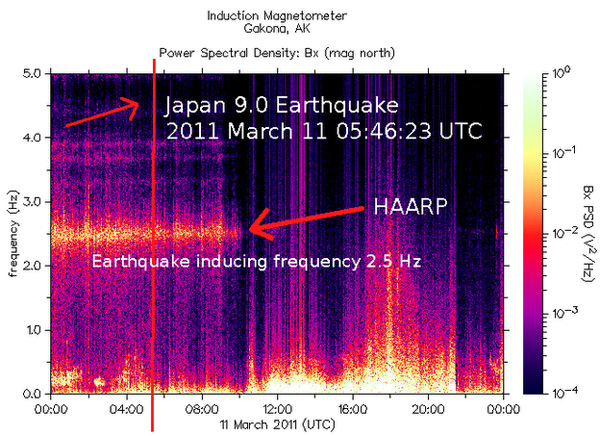 Below is the article from MIT's technologyreview.com

Atmosphere Above Japan Heated Rapidly Before M9 Earthquake
From: technologyreview.com 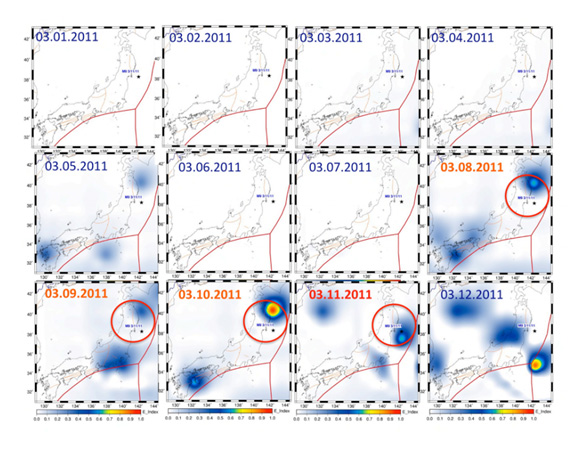 Infrared emissions above the epicenter increased dramatically in the days before the devastating earthquake in Japan, say scientists.

Geologists have long puzzled over anecdotal reports of strange atmospheric phenomena in the days before big earthquakes. But good data to back up these stories has been hard to come by.

In recent years, however, various teams have set up atmospheric monitoring stations in earthquake zones and a number of satellites are capable of sending back data about the state of the upper atmosphere and the ionosphere during an earthquake.

Last year, we looked at some fascinating data from the DEMETER spacecraft showing a significant increase in ultra-low frequency radio signals before the magnitude 7 Haiti earthquake in January 2010

Today, Dimitar Ouzounov at the NASA Goddard Space Flight Centre in Maryland and a few buddies present the data from the Great Tohoku earthquake which devastated Japan on 11 March. Their results, although preliminary, are eye-opening.

They say that before the M9 earthquake, the total electron content of the ionosphere increased dramatically over the epicentre, reaching a maximum three days before the quake struck.

At the same time, satellite observations showed a big increase in infrared emissions from above the epicentre, which peaked in the hours before the quake. In other words, the atmosphere was heating up.

These kinds of observations are consistent with an idea called the Lithosphere-Atmosphere-Ionosphere Coupling mechanism. The thinking is that in the days before an earthquake, the great stresses in a fault as it is about to give cause the releases large amounts of radon.

The radioactivity from this gas ionises the air on a large scale and this has a number of knock on effects. Since water molecules are attracted to ions in the air, ionisation triggers the large scale condensation of water.

But the process of condensation also releases heat and it is this that causes infrared emissions. "Our first results show that on March 8th a rapid increase of emitted infrared radiation was observed from the satellite data," say Ouzounov and co.

These emissions go on to effect the ionosphere and its total electron content.

It certainly makes sense that the lithosphere, atmosphere and ionosphere are coupled in a way that can be measured when one of them is perturbed. The question is to what extent the new evidence backs up this idea.

The Japan earthquake is the largest to have struck the island in modern times and will certainly turn out to be among the best studied. If good evidence of this relationship doesn't emerge from this data, other opportunities will be few and far between.

The image above was downloaded from the High Frequency Active Auroral Research Program (HAARP) website.

It is a time-frequency spectrogram, which shows the frequency content of signals recorded by the HAARP Induction Magnetometer.

This instrument, provided by the University of Tokyo, measures temporal variations in the geomagnetic field (Earth’s magnetosphere) in the ULF (ultra-low frequency) range of 0-5 Hz.

Notions have been added to the image to show you what was happening the day the Japan earthquake and tsunami struck.

By looking at the accompanying HAARP spectrum chart above you can see when the 9.0 magnitude earthquake struck – red line drawn vertically – and what was happening before and after the earthquake.

What you can also see is a constant ULF frequency of 2.5 Hz being recorded by the magnetometer.

The ULF 2.5 Hz frequency is evidence of an induced earthquake.

The chart recorded this constant before, during and after the 9.0 magnitude earthquake struck.

We know for a fact that the Japan earthquake lasted only a few minutes so why was the earthquake signature frequency (2.5 Hz) being recorded for 10 hours on the morning of March 11, 2011?

Because a HAARP phased array antenna system was broadcasting (transmitting) the 2.5Hz ULF frequency and it triggered the Japan earthquake and ensuing tsunami.

If you go to HAARP’s official website you can see for yourself that the 2.5 Hz ULF frequency wasn’t only being broadcated for 10 hours, it was constantly being broadcasted for 2 days prior to the earthquake.

Broadcasting began on March 8, 2011, just before midnight as you can see on HAARP’s website page – http://maestro.haarp.alaska.edu/cgi-bin/scmag/disp-scmag.cgi?20110308.

Click on the Next Day link to see that the earthquake inducing 2.5 Hz ULF frequency was being broadcasted for the entire days of March 9, 2011 and March 10, 2011.

Even though the signature frequency of an earthquake was shown throughout March 9 and March 10 there were no constant earthquakes occurring off the east coast of Japan.

What is the significance of a 2.5 Hz ULF broadcast?

The natural resonance of an earthquake is 2.5 Hz.

Scientists working for the United States military discovered this using the phased array antennas at the HAARP facility in Alaska.

HAARP’s own charts suggests that earthquakes occurred constantly for 3 days.

We know for a fact that they haven’t.

The HAARP magnetometer data provides proof that the Japan earthquake was not a naturally occurring quake – it was triggered.

This data shows us that a HAARP military installation was broadcasting the known earthquake signature frequency in order to trigger a major earthquake.

The broadcast was most likely being transmitted from a floating HAARP system like the floating Sea-Based X-Band Radar platform that can be moved anywhere in the Pacific or Atlantic ocean under the protection of a carrier strike group – like the USS Ronald Regan. 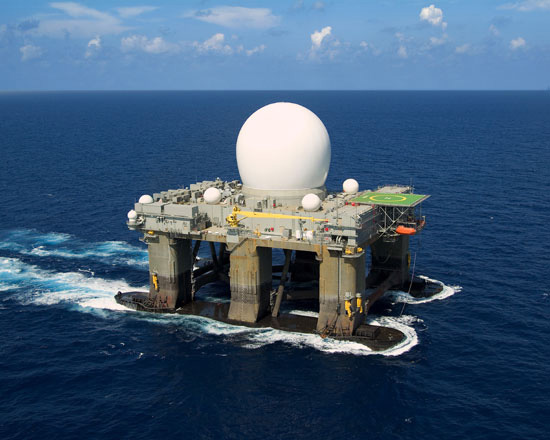 Where was the USS Ronald Reagan on the morning of March 11, 2011
According to a Stars & Stripes March 9, 2011 report – Reagan carrier group steams toward South Korea to join exercise.