Dec 15, 2015 Source: newobserveronline.com
At current rates of nonwhite immigration, Australia is set to become a minority white nation within the next fifty years, according to Canberra-based white rights activist Matthew Grant. 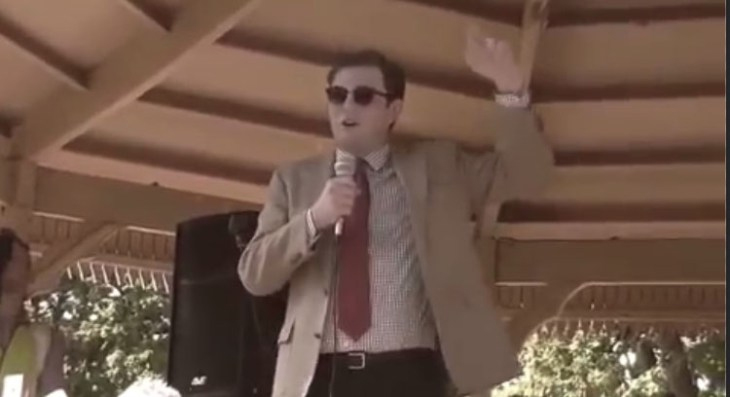 Grant, who attracted national media attention when he spoke at the recent Bendigo anti-mosque rally in Victoria, said in an exclusive interview with the New Observer that most white Australians oppose the idea of becoming a minority in their own country, but are currently intimidated into keeping quiet.

This problem is something he, and other activists, intend to correct by embarking on extended political campaign and electioneering in the near future.

The interview proceeded as follows:

Q. Please tell our readers a little about yourself.

A. I’m a Scottish Presbyterian who spends lots of time in the National Library; I’m also a Nationalist, in the traditional Australian sense in the word, in that I believe in the National Community as the basis from which all other political ideals should be derived and fought for, the security and health of the nation (in our case, the white European settlers of Australia) being of the utmost importance.

Q. Please tell our readers about your activity for Australian nationalism. Are you with any party/movement?

A. I run a Fraternity for people under the age of 25 who are of European heritage. We are a self-help organization designed to build solid lifelong ties and moral convictions in the membership.

Politically I’m not officially associated with any party as of yet, however I am growing rather close to the likes of the United Patriots Front and the Australia First Party.

I am an advocate for White Australia in my generation, and I have been working slowly to increase the spread of information on the topic through my website and my Facebook page, Generation: Tradition.

A. My ABC Interview was secured when I met a reporter at the October Bendigo rally. She was interested in what she thought was an “anti-Islamic” nationalist movement, and as the UPF wouldn’t speak to her, I said I would.

She had prepared a large set of questions pertaining to Islam, and was not expecting me to advocate a White Australia policy and express opposition to non-European immigration.

About five minutes of the half hour interview was aired, and the producer has refused to hand over any of the edited-out parts.

What I said was that race-consciousness does not consist of hating other races or people, but is simply the motion that all countries ought to remain racially and culturally homogeneous. In this way, the strongest sense of common identity and community spirit can be established. This is what I as a nationalist believe in, given that community self-help is better than a welfare state.

It leads to the best kind of community in which there is excellent cohesion and which fosters an environment of decent morality.

Q. What is the current racial-state-of-play in Australia?

A. The actual figures are impossible to know. Firstly, since 1972 the department of immigration has not been allowed to record the religious or racial backgrounds of any immigrant passing through our borders. They are just “people” and the national census does not list race, only nationality. In this way, any Chinaman or African can just write “Australian” because he feels like an Australian this year.

I would estimate the country is still 80 percent white. The cities however are reaching Asiatic populations of 35–40 percent in many places, which isn’t very good.

At the current trend of immigration, we are taking in 190,000 people a year. I would bet a few dollars that the majority of those immigrants are nonwhites. This means that we are in the dire situation where, in the next half century, the white race could indeed be a minority in the country we have built.

Q. Are there any parties actually concerned over this issue? If so, which ones?

A. Australia First and Nationalist Alternative are the only two parties that I’m aware of that openly show concern to this issue. Both have very interesting pasts as parties and I would recommend that nationalists look them up.

Q. Are there any indications that average white Australians are concerned over these issues?

A. Absolutely. You may not see it on the TV or the Internet too frequently, mainly due to very carefully instructed omission by government agencies and the media, but around the dinner table and at the barbecue, people are waking up to the destruction of their country.

All it will take is a big gulp of courage and the majority will openly advocate for a “White Australia” again.

The only reason they haven’t yet, is because they think they are a minority. The average Australian who likes the idea of White Australia thinks he is a “racist minority,” and so, all true Australians feel isolated and too afraid to have their viewpoint heard. Little do they know that they are indeed the majority.

Q. Tell us about your plans.

A. In the next couple years I will be moving out into rural New South Wales, which I believe is a strong heartland for nationalist sentiment in this country.