Check this Interactive map of the Bahá'í World Centre 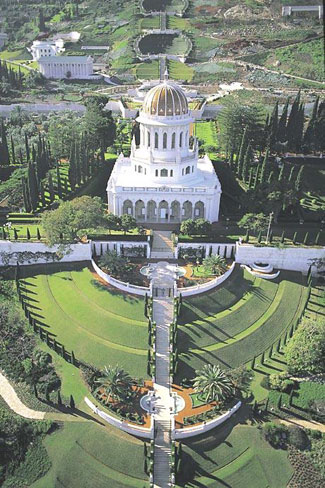 Born in 1817, Bahá'u'lláh was a member of one of the great patrician families (see below for definition) of Persia. The family could trace its lineage to the ruling dynasties of Persia's imperial past, and was endowed with wealth and vast estates. Turning His back on the position at court which these advantages offered Him, Bahá'u'lláh became known for His generosity and kindliness which made Him deeply loved among His countrymen.

This privileged position did not long survive Bahá'u'lláh's announcement of support for the message of the Báb . Engulfed in the waves of violence unleashed upon the Bábis after the Báb's execution Bahá'u'lláh suffered not only the loss of all His worldly endowments but was subjected to imprisonment, torture, and a series of banishments. The first was to Baghdad where, in 1863, He announced Himself as the One promised by the Báb. From Baghdad, Bahá'u'lláh was sent to Constantinople, to Adrianople, and finally to Acre, in the Holy Land, where He arrived as a prisoner in 1868.

From Adrianople and later from Acre, Bahá'u'lláh addressed a series of letters to the rulers of His day that are among the most remarkable documents in religious history. They proclaimed the coming unification of humanity and the emergence of a world civilization.

The kings, emperors, and presidents of the nineteenth century were called upon to reconcile their differences, curtail their armaments, and devote their energies to the establishment of universal peace.

Bahá'u'lláh passed away at Bahji, just north of Acre, and is buried there. His teachings had already begun to spread beyond the confines of the Middle East, and His Shrine is today the focal point of the world community which these teachings have brought into being.

Definition of Patrician
The term "patrician" originally referred to a group of elite families in ancient Rome, including both their natural and adopted members. In the late Roman empire, the class was broadened to include high court officials.

The word "patrician" is derived from the Latin word patricius (plural patricii), which comes from patres, the plural of pater ("father"). Pater was the term applied to the original members of the Roman Senate. The word comes down in English as "patrician" from the Middle English patricion, from the Old French patrician. In modern English, the word patrician is generally used to denote a member of the upper class, often with connotations of inherited wealth, elitism, and a sense of noblesse oblige.

The Báb (1819-1850)
On May 23, 1844, in Shiraz, Persia, a young man known as the Báb announced the imminent appearance of the Messenger of God awaited by all the peoples of the world. The title Báb means "the Gate." Although Himself the bearer of an independent revelation from God, the Báb declared that His purpose was to prepare mankind for this advent.

Swift and savage persecution at the hands of the dominant Muslim clergy followed this announcement. The Báb was arrested, beaten, imprisoned, and finally on July 9, 1850 was executed in the public square of the city of Tabriz. Some 20,000 of His followers perished in a series of massacres throughout Persia. Today, the majestic building with the golden dome, overlooking the Bay of Haifa, Israel, and set amidst beautiful gardens, is the Shrine where the Báb's earthly remains are entombed. 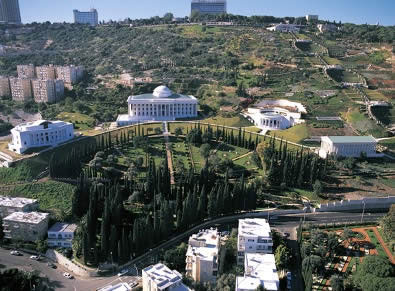 An aerial view of the administrative buildings of the Bahá'í World Centre. From left to right: The International Teaching Centre Building, the Seat of the Universal House of Justice, the Centre for the Study of the Texts, and the International Archives Building. In the background (upper right) are the topmost terraces above the Shrine of the Báb.

From: The Bahá'í World Centre

Photo Gallery of the Bahá'í Houses of Worship

Bahá'í Involvement at the Earth Summit
The Bahá'í community made several contributions to the United Nations Conference on Environment and Development and the 1992 Global Forum which took place in Rio de Janeiro, Brazil.

By any account, the Earth Summit and its companion conference, the '92 Global Forum, were history-making events. The mere fact that over 100 heads of state, more than on any other occasion, gathered to discuss global concerns with the depth and complexity of environment and development issues represented a milestone for humanity. The parallel gathering of some 27,000 representatives from thousands of non-governmental organizations (NGOs) was likewise unprecedented, not only for its numbers but for its diversity.

Government delegations to the United Nations Conference on Environment and Development (UNCED), as the Earth Summit was formally known, agreed on two major treaties aimed at slowing global warming and preserving the earth's biological diversity. Governments also adopted the principles of "Agenda 21," a 500-page, 40-chapter, global action-plan to guide the world community into the 21st century, and agreed to create a United Nations Commission on Sustainable Development.

From: Bahá'í Involvement at the Earth Summit