Jul 29, 2015 Source: lukeford.net
Kevin MacDonald writes in 2010:
In the video below, Barbara Lerner Spectre, who runs a government-funded Jewish study group in Sweden, makes the following remarkable statement—remarkable because she does not attribute anti-Jewish attitudes to irrational prejudices or even Muslims who hate Israel. Instead she says that it’s because of the “leading role” played by Jews in the movement toward multiculturalism:

“I think there is a resurgence of anti-Semitism because at this point in time Europe has not yet learned how to be multicultural. And I think we are going to be part of the throes of that transformation, which must take place. Europe is not going to be the monolithic societies they once were in the last century. Jews are going to be at the centre of that. It’s a huge transformation for Europe to make. They are now going into a multicultural mode and Jews will be resented because of our leading role. But without that leading role and without that transformation, Europe will not survive.”

In this tweet, the European Jewish activist says: “being jewish is a tangible unbroken form of identity going back 3000 years, whiteness is a construct from 200 ybp”

In a December 17, 2014 tweet, she endorses white genocide: “we can’t let lone nutters get in the way of progress #illridewithyou #endwhitepeople #socialjustice #stopracism #wearetheworld”

Most of you will be familiar with that witch Barbara Lerner Spectre, she who has made it her business to transform Europe in general and Sweden in particular into a multicultural cesspool. While at the same time jealously guarding the ethnic purity of Israel. “Europe must become multicultural if it is to survive” she informs us but fails to provide any evidence in support of that remarkable conclusion. And that of course is because there is no such evidence.

Now it seems that this malevolent old hag has been in contact with a renowned American academic on Twitter. I speak of “Dr.” Kamau Kambon, Professor of Molecular Biology – whoops sorry, make that African Studies – at North Carolina State University. In a lecture (covered in its entirety by the C-Span channel) he proposes a though-provoking solution to the manifold problems of black people: To wit “the extermination of white people from the face of the planet.” A proposal which was roundly applauded by the university attendance. Incidentally he doesn’t go on to explain who’ll pay for blacks’ EBT cards when Whitey is gone, but then again long-term planning has never been a black forte.

But back to that witch Spectre. Reader Thor has sent me this extract of a Twitter exchange between her and “Professor” Tampon. It seems a Swedish blogger captured the screen shots which the malevolent hag deleted when he reported her to the Swedish authorities. As such I cannot vouch for its authenticity but it looks genuine. 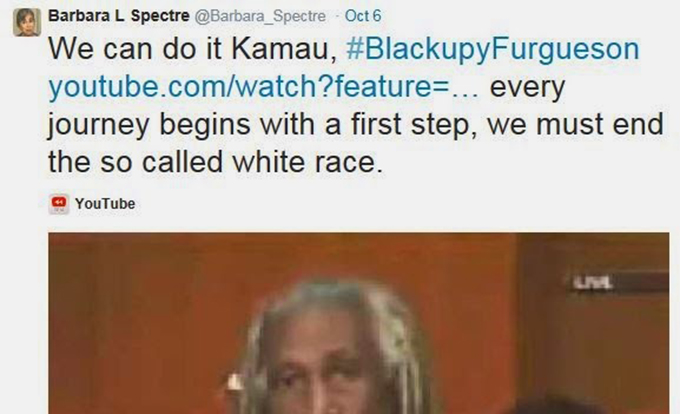 Now I’m sure you’re all eagerly waiting for me to spell out the fate of this genocidal crone. Does she languish in prison, charged under Sweden’s myriad of HATE laws such as those that saw artist Dan Park jailed for six months for ‘hurtful’ drawings of local enrichers. Would not the legal principle of proportionality see Babs eating porridge in the slammer for at least ten years? No. Fired from job as Destroyer Of The Swedish People then? No. Damn it, at least the Swedish Government stopped paying her organisation to exterminate the people they purportedly represent? Again no. Nothing. She continues on her merry destructive way, her salary and other costs payed by the very people she’s destroying.

And it’s not as if she’s averse to a bit of litigation herself should any White person stand up for himself. As these Twitter extracts make clear. 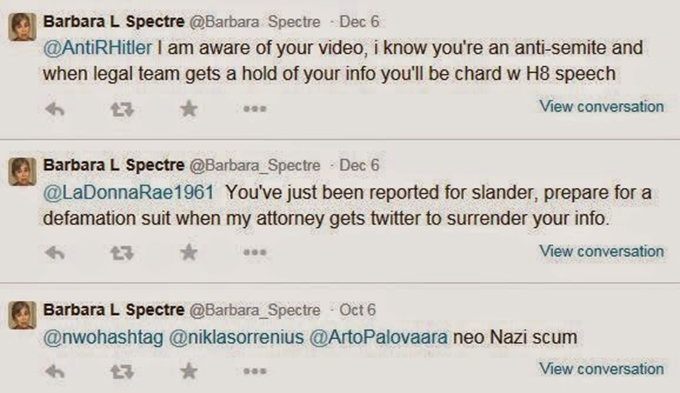