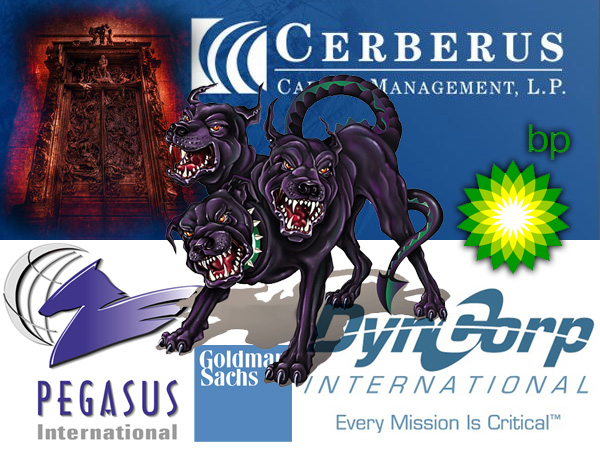 If the embedded map above doesn't work, go here for map.

The following you-tube video is a bit spurious and misinforming to say the least.

First, this is not an “Air Force Base” — it is a PRIVATELY OWNED FACILITY known as “Reynolds Airpark” a private Airport and “manufacturing facility”. A Mr. Ted McGowan is the manager – and their phone number is: 904-284-3505. Second, these are not “U.N. Vehicles”. These white vans belong to Pegasus International and Cerberus/DynCorp. 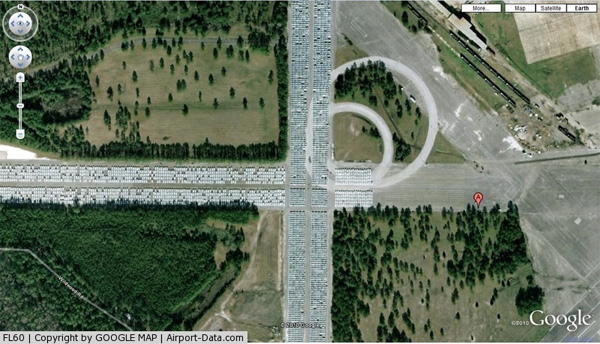 Now, for the BAD NEWS — “Reynolds Airpark” is listed in the Clay County Fla. plat/tax rolls as being wholly owned by a company named Pegasus International. Ok, I thought, what exactly is “Pegasus International” and what exactly do they do?? Well – among other things, they just happen to be involved in the OIL DRILLING BUSINESS – with ties to Halliburton and BRITISH PETROLEUM!!! What the hell??? See their website at: pegasus-international.com

Then, of all things, they just happen to have an office in Salt Lake City, Utah. Here is where the plot thickens. Their SLC office also houses Dick Cheney’s Halliburton, and is next to the Minerals Management Service (MMS) offices. Worse, their U.K. office “address” is next door to (or possibly even a part of) British Petroleum as well. What is going on?? They also have “offices” in Turkmenistan, Nigeria, and Azerbijan – hotbeds of political intrigue and profiteering for BP. See universalpegasus.com

But — it gets worse, if possible. “Pegasus International” owns and operates Pegasus Technologies – which is involved in a neat little NSA/CIA operation titled the “Information Sharing Council” or ISC. Their “unclassified” 2006 report can be seen here (pdf). A careful reading of this document shows that part of the “Pegasus Program” is the deployment of thousands of vehicles across America, outfitted with domestic spying “Maximum Information Technology” (MaxIT) systems. MaxIT is a joint venture of the following companies: Appriss Inc., Bio-Key International, Inc., Business Communications Inc., Circadence Corporation, Cquay Technologies, Dell, eLabs Inc., MS e-Center and Sun Microsystems. (See 12/12/03 report here)

Also, check this out. Dyncorp Int. was “purchased” back on April 12 by Cerberus Capital, and the “deal” was brokered by, you guessed it, Goldman Sachs who SHORTED TRANSOCEAN STOCKS on April 17, three days before the Gulf Oil debacle began. (See here for more details about that).

WHAT IN THE GATES OF HELL IS GOING ON????? Here we have VISUAL PROOF of hundreds of vehicles undergoing modifications by Pegasus International teams at their Reynolds AirPark facility, all indications of MaxIT information is that the process involved is basically making the vehicles ultra-modern “spy-mobiles” (the on-line google-earth picture was dated Jan. 2008, while the most current picture of May 28, 2010 -shows the spy-vans still on property.) We also now know that Dyncorp is now Cerberus, and they are tied to Pegasus International. So, what’s in a name?

Consider that Pegasus and Cerberus are both central figures of Greek (and Roman) mythology. Pegasus is the preferred mode of transportation for the pantheon of gods, while Cerberus — well — this is the mythical guardian of the gates of hell! What would possess anybody to name their corporation Cerberus???

This world is in deep trouble, it would appear.

Cerberus was the guard to the gates of hades, sometimes described as a dog or a wolf and the original “hound from hell”. Cerberus had three heads & its said a serpents tail, like the Chimera it was said to be the offspring of Echidna and the Dragon Typhon. This creature crops up not only in greek myth but also in ROMAN myth. Said to have been placated with honeyed cakes mourners would place them in coffins to appease the beast. Any spirit attempting to leave hades was said to have been torn apart by the savage guardian.

Note that Goldman Sachs Sold 44% Of BP Stock 3 Weeks Before Blowout. Was the Oil disaster planned?

Cerberus in Greek and Roman mythology, is a multi-headed hound which guards the gates of Hades (gates of hell), to prevent those who have crossed the river Styx from ever escaping.

DynCorp International's Involvement in trafficking of child sex slaves
According to whistleblower Ben Johnston, a former aircraft mechanic who worked for the company in Bosnia, Dyncorp employees and supervisors engaged in sex with 12 to 15 year old children, and sold them to each other as slaves. Ben Johnston ended up fired, forcing him into protective custody. According to Johnston, none of the girls were from Bosnia itself, but were imported by Dyncorp from Russia, Romania and other places.
On June 2, 2000, members of the 48th Military Police Detachment conducted a sting on the DynCorp hangar at Comanche Base Camp, one of two U.S. bases in Bosnia, and all DynCorp personnel were detained for questioning. CID spent several weeks working the investigation and the results appear to support Johnston's allegations. For example, according to DynCorp employee Kevin Werner's sworn statement to CID, "during my last six months I have come to know a man we call 'Debeli,' which is Bosnian for fat boy. He is the operator of a nightclub by the name of Harley's that offers prostitution. Women are sold hourly, nightly or permanently."

DynCorp International, Inc., a leading global government services provider in support of U.S. national security and foreign policy objectives, today announced it has entered into a definitive agreement to be acquired by affiliated funds and/or managed accounts of private investment firm Cerberus Capital Management, L.P. (“Cerberus”) in a transaction with a total value of approximately $1.5 billion, including the assumption of debt.

“Cerberus is pleased to partner with the outstanding management team and dedicated employees of DynCorp International,” said Timothy F. Price, Cerberus Managing Director and spokesperson. “This exciting news underscores our successful track record in the government services sector and furthers our goal of continuing to grow our portfolio in this area. DynCorp International has a demonstrated history of strong customer oriented performance, from a unique global platform. We are confident that DynCorp International will continue to serve its customers well while expanding its service offerings to current and prospective customers.”

Upon completion of the merger, DynCorp International will become a private company, wholly-owned by Cerberus.