Dec 23, 2013 By Henrik Palmgren | redice.tv
Unfortunately, by now everyone has heard of the controversy surrounding highly popular Phil Robertson, founder of the company Duck Commander and star of the Duck Dynasty reality TV show for comments he made during a GQ (hit piece style) interview, expressing his religious beliefs and sexual preference.

It’s important to note that GQ is owned by Conde Nast. A&E is part-owned by another publisher, Hearst Corporation and also Disney-ABC. Conde Nast and Hearst are direct competitors. Conde Nast knew that publishing an article of this nature would stir up controversy (in today’s politically correct totalitarian world) for A&E and bring backlash, not on GQ/Conde Nast but on Hearst/A&E. Look at how many are boycotting A&E. If you are boycotting A&E, you may as well boycott Disney-ABC because they are the other owners of the station along with Hearst.

Because of Phil’s comments, Charlie Sheen posted a semi-coherent Twitter message on December 21 addressing Phil Robertson saying “you are now in the crosshairs of a MaSheen style media beat down” and that “shame on you. you’re the only surviving brain donor I’ve ever known.” Read Twitter post here.

Meanwhile, the website istandwithphil.com has started a petition to the A&E Network demanding the immediate reinstatement of Phil Robertson. The open letter to A&E Reads:

Dear A&E Network, I am writing to you regarding your network’s intolerant, discriminatory, and punitive treatment of Mr. Phil Robertson, star of A&E’s #1 hit show, Duck Dynasty.

Mr. Robertson’s comments in GQ Magazine are simply reflective of a Biblical view of sexuality, marriage, and family – a view that has stood the test of time for thousands of years and continues to be held by the majority of Americans and today’s world as a whole.

Many members of the LGBT community may not agree with this view, but the notion that a free-thinking American should be discriminated against simply for expressing a perspective that is in conflict with another is patently un-American and flies in the face of true tolerance and civility. A&E’s position, which in your own words is “championing” the gay and lesbian community — which I believe you have the freedom to do — excludes the views of Faith Driven Consumers and effectively censors a legitimate viewpoint held by the majority of Americans.

As a Faith Driven Consumer, I am signing this petition to demand that my views be treated with equality and respect in America’s rich rainbow of diversity. I am asking your network to immediately reinstate Mr. Robertson to Duck Dynasty, and to formally apologize to him, his family, and the millions of viewers who tune in every week, stand by him, and share his worldview. While the LGBT community may be offended by his opposing viewpoint, your rash, discriminatory, and unfair treatment toward Mr. Robertson — a recognized symbol of the faith community — is a slap in the face to Faith Driven Consumers and everyday Americans alike.

There are 46 million Faith Driven Consumers in America today who spend 1.75 trillion dollars annually. Should you refuse to equally respect and welcome our legitimately held views, we will gladly stop watching this and all other A&E programming and turn to any reformulation of Duck Dynasty on another network – while simultaneously supporting brands that stand with the show and the Robertson family.

If you take the time to click around the comment pages, such as on page 474 (as of December 23 at 4:00 pm) you will find a comment made 1 day ago from Charlie Sheen that says, “i came down from my cocaine high and realized the error of my ways. I’m sorry Phil.” 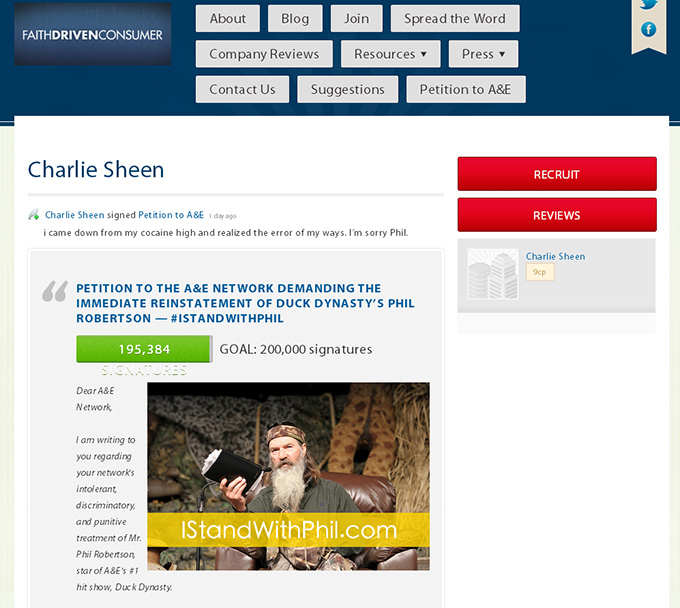 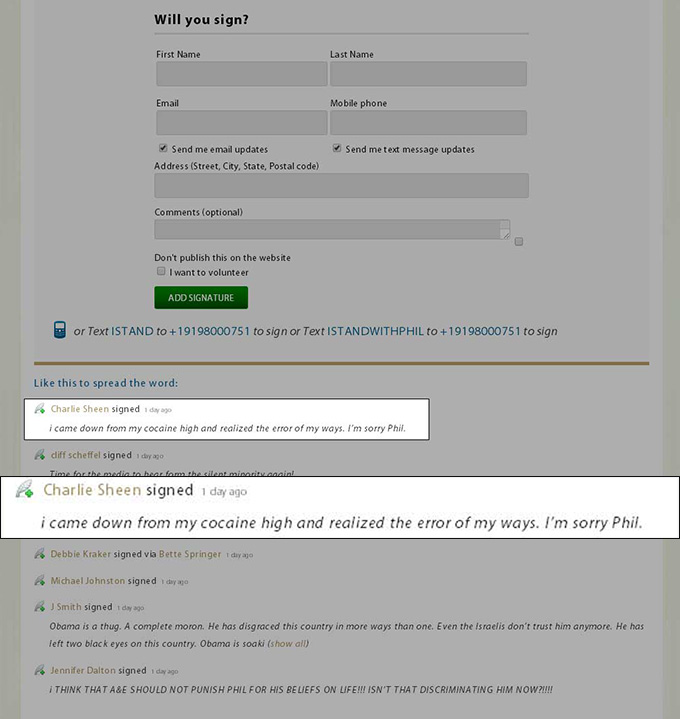 Could this actually be the one and only Charlie Sheen apologizing to Phil Robertson in a sober state?

I came up with a PERFECT holiday idea! Denise and Phil Robertson should get married! then he can practice the Bestiality he hates! c :)

Although A&E suspended Robertson over his interview, Phil will return to Duck Dynasty episodes in January.