Cyclopean Masonry: A Mystery of the Ancient World

Apr 16, 2014 Source: paranormalpeopleonline.com
They don’t make things like they used to, and that is, in some cases, a monumental understatement.

Silly wordplay notwithstanding, there is something to be said for the construction techniques of the old world. Where modern buildings are designed to withstand the elements; wind, temperature extremes, earthquakes and floods, today’s engineers have to strike a balance between economics and robust design. They do a good job, for the most part, but modern building techniques pale in comparison to the construction practices of ancient cultures. 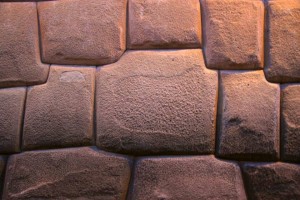 A part of the rock wall at Cuzco, Peru 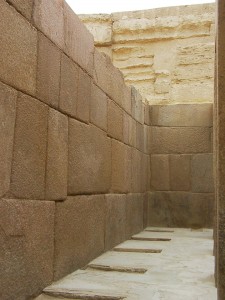 Part of the entrance tunnel to the Khafre Valley Temple, Egypt
The very fact that ancient monuments still stand is a testament to their expertise. Ancient city ruins, pyramids, rock walls and pillars, they were all built to stand the test of time, and in many cases, they passed that test with flying colours. This may be partly due to the materials they used. Stone has an inherent durability, and the goal of longevity is only furthered by its use in construction. Unlike its artificial counterparts – cement, concrete, asphalt, etc. – many types of stone have lifecycles counted in the millions of years, and if a stone monument, whether that be a wall, an archway, a pyramid or any other structure, is built using certain techniques, it’s certain to last eons into the future.

The earliest examples of cyclopean masonry are found in Egypt, in the Khafre pyramid complex at Giza, specifically in the valley temple, which is the oldest part of the pyramid complex, dating to the fourth dynasty of the old kingdom (c.2520-2494 BCE). Most experts however, exclude the Khafre valley temple from listings of cyclopean masonry, as the term itself is derived from the early Mycenaean culture of ancient Greece, which developed at least 1000 years later.

Read the full article at: paranormalpeopleonline.com

Cyclopean masonry is a type of stonework found in Mycenaean architecture, built with massive limestone boulders, roughly fitted together with minimal clearance between adjacent stones and no use of mortar. The boulders typically seem unworked, but some may have been worked roughly with a hammer and the gaps between boulders filled in with smaller chunks of limestone.

The most famous examples of Cyclopean masonry are found in the walls of Mycenae and Tiryns, and the style is characteristic of Mycenaean fortifications. Similar styles of stonework are found in other cultures and the term has come to be used to describe typical stonework of this sort.

The term comes from the belief of classical Greeks that only the mythical Cyclopes had the strength to move the enormous boulders that made up the walls of Mycenae and Tiryns. Pliny’s Natural History reported the tradition attributed to Aristotle, that the Cyclopes were the inventors of masonry towers, giving rise to the designation Cyclopean.

READ: Amazing Giant Megaliths in Russia: Natural or Man Made?