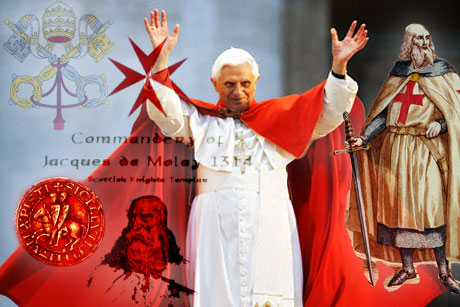 A British order of Templars that claims direct descent from the original Knights Templar is calling on the Pope to apologise after the recent discovery of an ancient Vatican document showing that the knights had been absolved of the charges laid against them seven centuries ago.

The accusations of heresy led to the disbandment of the order and the burning at the stake of Jacques de Molay, the order’s grand master.

The Vatican will next week publish a 5,900-euro (£3,925) collector’s edition of its documents on the Knights Templar, the wealthy medieval order formed to protect Christian pilgrims travelling to Jerusalem after the holy city was captured in the Crusades.

The knights remain at the centre of numerous Holy Grail conspiracy theories and intrigues, including the plot of the novel, The Da Vinci Code, by Dan Brown. One of the documents, the Chinon Parchment, shows that in the early 14th century, Pope Clement V’s investigation of the order absolved the knights of the heresy charges that led to many of them being tortured and burnt.

Ben Acheson, a member of a Templar order based in Hertford, Hertfordshire, which claims direct descent from the original Poor Fellow Soldiers of Jesus Christ and the Temple of Solomon Grand Preceptory, called for Pope Benedict XVI to apologise formally.

He said: “The word ‘sorry’ is conspicuous by its absence. But basically, they have said we were absolved, which is an historic admission. For me, that makes it all the more astonishing that the tortures and executions were allowed to continue. For me, that is why the apology is still the missing piece of the puzzle.

“Nevertheless, I would like to think that this could be a turning point.” In 2004 the order wrote to the Pope, requesting an apology “for the torture and murder of our leadership, instigated by Pope Clement V” in advance of the 700th anniversary of “the persecution of our order on October 13, 2007”.

At the time, Ben Acheson’s brother Tim, told The Times: “The Papacy and the Kingdom of France conspired to destroy the Order for reasons which modern historians judge to be primarily political. Their methods and motives are now universally regarded as brutal, unfair and unjustified. “The Knights Templar officially ceased to exist in the early 1300s, but the order continued underground. It was a huge organisation and the vast majority of Templars survived the persecution, including most of their leaders, along with much of their treasure and, most importantly, their original values and traditions.”

The Vatican is understood to have given serious consideration to the request for an apology. It has previously apologised formally for the persecution of Galileo and for the Crusades.