Pope, former pope meet in first such encounter in 600 years 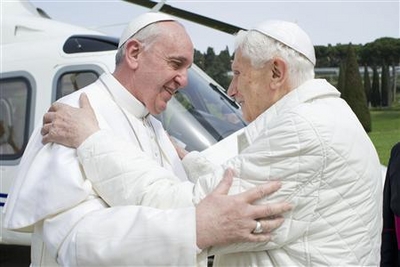 A reigning pope and a former pope faced each other for the first time in at least 600 years on Saturday when Pope Francis travelled south of Rome for lunch with his predecessor, pope emeritus Benedict XVI.

Francis, who was elected on March 13, flew by helicopter to the papal summer residence at Castel Gandolfo, where Benedict has been living since he abdicated on February 28.

Footage released by the Vatican showed the two men, both dressed in nearly identical white clerical garb, including white skull caps, embracing shortly after the helicopter landed at the large estate.

The only difference in garb is that Francis also wears a short white cape over his cassock and a white sash around his waist - both symbols of his authority. On Saturday Benedict, who often suffered from chills, even indoors, wore a thick white vest over his cassock.

They then rode in the same car to the residence where they prayed together, spoke alone for about 45 minutes and then had lunch accompanied by their two secretaries. Vatican spokesman Father Federico Lombardi said the atmosphere for the entire visit, which lasted just under three hours, was "family-like".

When they went to pray in the chapel, Benedict offered the place of honour, a kneeler before the altar, to Francis, who declined, saying, "We are brothers, we pray together," Lombardi said. Footage showed the two men praying at the same pew.

Asked about the health of Benedict, who became the first pope in 600 years to resign instead of ruling for life, citing diminishing strength, Lombardi said: "It is normal, he is an old man."

Benedict has been living temporarily in the summer residence in the Alban Hills and will move back to the Vatican after the restoration of a convent where he is expected to live for the rest of his life.

Shortly before his resignation, Benedict, now 85, said he would be "withdrawing into prayer" and would live out his remaining days "hidden from the world".

In February, on the last day of his nearly eight years as leader of the Catholic Church, Benedict pledged his unconditional obedience to whoever would succeed him. Lombardi said the meeting "gave Benedict the opportunity, through his gestures" to renew his pledge personally.

Read the full article at: au.news.yahoo