French village which will ’survive 2012 Armageddon’ plagued by visitors

Dec 23, 2010 Source: telegraph.co.uk
The mayor of a picturesque French village has threatened to call in the army to seal it off from a tide of New Age fanatics and UFO watchers, who are convinced it is the only place on Earth to be spared Armageddon in 2012.

Bugarach, population 189, is a peaceful farming village in the Aude region, southwestern France and sits at the foot of the Pic de Bugarach, the highest mountain in the Corbières wine-growing area. 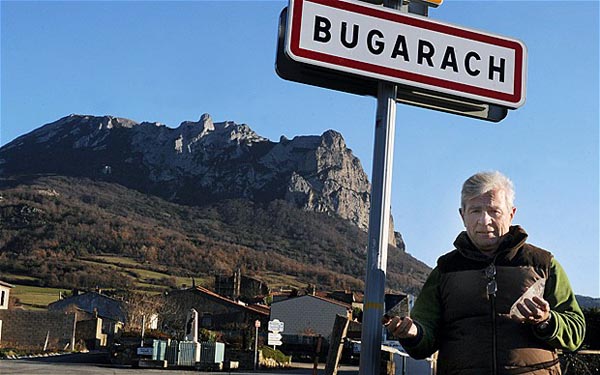 The mayor of Bugarach, Jean-Pierre Delord stands on the outskirts of the village. Photo: AFP
But in the past few months, the quiet village has been inundated by groups of esoteric outsiders who believe the peak is an "alien garage".
According to them, extraterrestrials are quietly waiting in a massive cavity beneath the rock for the world to end, at which point they will leave, taking, it is hoped, a lucky few humans with them.

Most believe Armageddon will take place on December 21, 2012, the end date of the ancient Maya calendar, at which point they predict human civilisation will come to an end. Another favourite date mentioned is 12, December, 2012. They see Bugarach as one of perhaps several "sacred mountains" sheltered from the cataclysm.

"This is no laughing matter," Jean-Pierre Delord, the mayor, told The Daily Telegraph.

"If tomorrow 10,000 people turn up, as a village of 200 people we will not be able to cope. I have informed the regional authorities of our concerns and want the army to be at hand if necessary come December 2012."

Mr Delord said people had been coming to the village for the past 10 years or so in search of alien life following a post in an UFO review by a local man, who has since died. "He claimed he had seen aliens and heard the humming of their spacecraft under the mountain," he said.

The internet abounds with tales of the late President François Mitterrand being curiously heliported on to the peak, of mysterious digs conducted by the Nazis and later Mossad, the Israeli secret services.

A visit to Bugarach is said to have inspired Steven Spielberg in his film, Close Encounters of the Third Kind – although the actual mountain he used is Devil’s Tower in Wyoming. It is also where Jules Verne found the entrance and the inspiration for A Journey to the Centre of the Earth.

Recently, however, interest in the site had skyrocketed, said the mayor, with online UFO websites, many in the US, advising people to seek shelter in Bugarach as the countdown to Armageddon commences.

"Many come and pray on the mountainside. I’ve even seen one man doing some ritual totally nude up there," said Mr Delord.

Sigrid Benard, who runs the Maison de la Nature guesthouse, said UFO tourists were taking over. "At first, my clientele was 72 per cent ramblers. Today, I have 68 per cent ’esoteric visitors’," he said.

Several "Ufologists" have bought up properties in the small hamlet of Le Linas, in the mountain’s shadow for "extortionate" prices, and locals have complained they are being priced out of the market. Strange sect-like courses are held for up to €800 a week. "For this price, you are introduced to a guru, made to go on a procession, offered a christening and other rubbish, all payable in cash," said Mr Delord.

Valerie Austin, a retired Briton from Newcastle who settled in Bugarach 22 years ago who said the alien watchers were spoiling the village atmosphere.

"You can’t go for a peaceful walk anymore. It’s a beautiful area, but now you find people chanting lying around meditating. Everybody has the right to their own beliefs, but the place no longer feels like ours." She said alien watchers planted strange objects on the mountainside.

Recently she found a black virgin statuette cemented to the rock face.
Although she described the alien claims as "total rubbish", she said there was nevertheless something special about the place.

"It has a magnetic force in the scientific sense of the word. There is a special feeling here, but if I really believed the world were about to end, I’d have a whale of a time over the next two years" rather than look for salvation, she said.

Geoff Stray - Beyond 2012: Catastrophe or Ecstasy