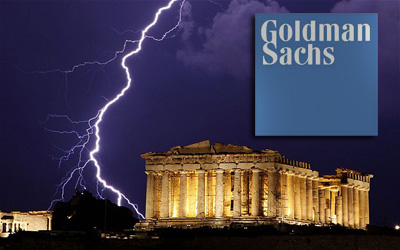 According to an official statement as reported by Reuters, Greece’s bank rescue fund has turned to the banking mafia duo in order to sell off two Greek banks (Proton and Hellenic Postbank) that were all but decimated by the economic turmoil in the nation. And who better to help sell these banks and help Greece to get back to a stable economic than Goldman Sachs, who actually was very helpful in helping to wage financial warfare on the Greek people through hiding Greece’s slimy debt.

But that, of course, is just seasoning on top of the ironic yet horrific dish cooked up by this rescue fund in choosing the very origin of the modern banking mafia through turning to the notorious Rothschild family. From funding mega wars to originally making their massive wealth through outright deception following the Battle of Waterloo, electing any Rothschild to act as a Greek adviser is a choice that goes against the interests of the Greek people.

But then again, that is the way of the international banking cartel.

Read the full article at: storyleak.com