Nick Dunbar, author of ’The Devil’s Derivatives’, reveals how the country turned to investment bank Goldman Sachs for help getting around the deficit rules.

In his report for Newsnight, some of those who did the deal, talk publicly for the first time. 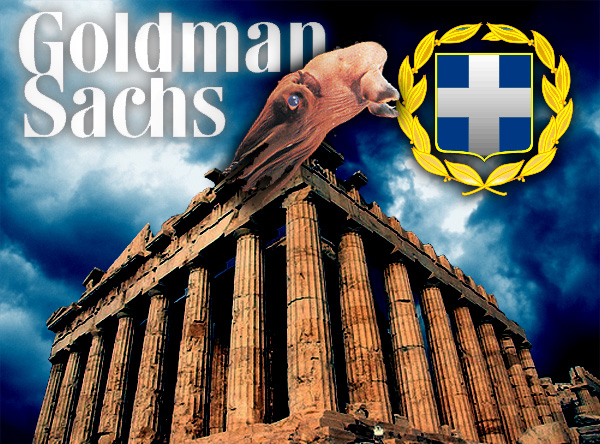 Goldman Sachs has admitted that it is under investigation for helping Greece to hide its vast debts.

The controversial Wall Street bank - nicknamed the Vampire Squid because its tentacles stretch far and wide - is accused of having profiteered out of a complex currency deal that helped Greece massage its finances.

In a regulatory filing in the U.S., Goldman disclosed that is ’subject to a number of investigations and reviews by various governmental and regulatory authorities in connection with its financial transactions with Greece.

The European Commission has already been probing the bank’s relationship with Athens. It is unclear from the disclosure, how many other countries might be looking into its dealings with the Mediterranean state.

The Wall Street giant is claimed to have received as much as £192m in fees by entering a complex currency transaction in 2001 that helped Athens borrow cash without putting it on the books as a loan.