Is Algae the Biofuel of the Future?

Nov 18, 2009 Source: scientificamerican.com
There are some signs that the algae-based fuel industry might be ready to bloom. 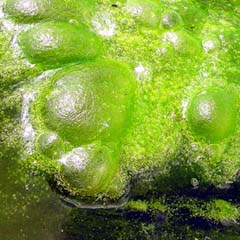 One of the nascent industry's biggest and most well-heeled players, Sapphire Energy, announced last week that it would be producing 1 million gallons of diesel and jet fuel a year by 2011, double its initial estimates.

But there's a hitch: Federal law makes no room for algae-based fuel in the RFS. The 2007 energy law caps corn ethanol production at 15 billion gallons a year by 2015 and has the remaining 21 billion gallons of renewable fuels coming from advanced biofuels, including 17 billion gallons from cellulosic biofuels and biodiesel.

"There needs to be policy work done to incorporate these new concepts like algae, which is an organism that actually consumes large amounts of carbon in the process of creating a liquid transportation fuel," said Tim Zenk, vice president of corporate affairs at Sapphire.

Sapphire is working to get lipids(oils) from various strains of algae, which would then be fed directly into the current refining cycle, as any other crude product. Source
Algae-based fuel producers use sunlight, water and carbon dioxide to convert carbon dioxide into sugar, which the algae metabolize into lipids, or oil. The industry says it can do so using non-potable water and without converting more forests into farm fields – thus addressing major criticisms of corn- and soy-based biofuels.

Sapphire says its technology is unique because it produces a fuel that can be used with existing U.S. pipelines, refineries, cars, trucks and airplanes. "We are 100 percent convinced that the only way to address climate and energy security is to use the same infrastructure we already have," Zenk said.

"They really like us because we're providing them with what they do today, which is refining crude oil," Zenk said. "It's not ethanol, it's not biodiesel. It has the same molecules as gas, diesel or jet fuels."

The company's jet fuel was tested earlier this year by two of three airlines testing the commercial use of algae-based fuels in flight. Continental Airlines reported that the Boeing 737-800 test flight on Jan. 7 was successful. That test was the first commercial airline test of algae-based biofuel.

"Continental's primary role in the demonstration was to show that the biofuel blend would perform just like traditional jet fuel in our existing aircraft without modification of the engines or the aircraft," said Holden Shannon, Continental's senior vice president for global research and security, during a congressional hearing last month. "This is important because ... the current engine and airframe technology is unlikely to change materially for many years, so it is crucial that alternative fuel be safe for use with the current aircraft technology."

Zenk said the test flight showed that algae fuel gets better mileage than petroleum-based jet fuel. "We noticed a 4 percent increase in energy density in the fuels because of the lower-burning temperatures in the engine itself, which resulted in greater fuel mileage," he said.

But more work needs to be done. Both Zenk and Shannon noted the long certification process to approve jet fuels for commercial aviation. Still, the airline industry thinks it could be using biofuels in its flights on a large scale within three to five years. And Sapphire said its "drop in" transportation fuels – jet fuel, gasoline and diesel – will be ready for commercial deployment in three years.

"Fuel from algae is not just a laboratory experiment or something to speculate on for years to come," said Brian Goodall, Sapphire's vice president of downstream technology, in a statement. "We've worked tirelessly, and the technology is ready now."

Indeed, creating fuel from algae is not as far-fetched as it may seem. Petroleum crude oil used today to create gasoline, jet fuel, plastics and other substances was once pond scum – albeit 500 million years ago.

At that time, the Earth's atmosphere contained 18 times more carbon dioxide than it does today, which resulted in a giant algal bloom. The algae grew over a period of 100 million years and then died. After time, temperature and pressure worked their magic, and that algae became the crude oil extracted today from the Rocky Mountain West and other reservoirs around the world.

"Once we figured this all out and applied modern biology to it – genetics, genetic engineering, molecular biology – it allowed us to think creatively about how to speed up the evolution of that product, that commodity that we value today, by about 500 million years," Zenk said.

Another major benefit of algae as a fuel feedstock is its massive consumption of carbon dioxide.

In the Sapphire process, 1 kilogram of algae biomass uses 1.8 kilograms of CO2. About 50 percent of that algal biomass is oil, so the production of each gallon of oil consumes 13 to 14 kilograms of the greenhouse gas, Zenk said.

"You can see, it's just completely packed full of that stuff," Zenk said. "That's what makes it one of the most unique plants on planet Earth for consumption of carbon."

Read the full article at: ScientificAmerican.com