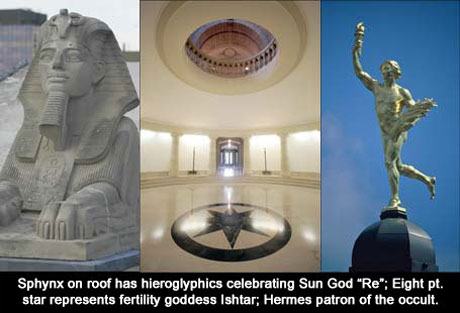 Not five miles from my Winnipeg home is the Manitoba legislature. In November, the Winnipeg Free Press ran a 15-part series revealing how the legislature building is similar in numerous ways with a pagan Egyptian temple.

For example, Researcher Frank Albo found that the Lieut. Gov.'s reception room has precisely the same measurements as the "Holy of Holies," the sacred chamber in Solomon's Temple, which housed the Ark of the Covenant. It is symbolic of the Master's Lodge where the most sacred rites of Freemasonry are performed.

Albo discovered that nearly everyone involved in the construction from 1914 to 1920, was a Freemason, including the Paris-trained architect, the contractor, the Premier and almost his whole government. The temple, replete with colonnades, murals, sphinxes and statues of famous Masons cost three times as much as other provincial legislatures.

In 1911, the Manitoba Free Press commented that the architectural competition smacked of a "frame-up with some ulterior object in view." (Dec. 9, 1911) (In fact a scandal over costs and corruption which erupted in 1915 cost the Premier his job and sent the contractor to jail.)

If the legislature is indeed a disguised pagan temple, the implications are staggering:

This building ostensibly represents the public. It seems that, even in 1912, an occult secret society, the Freemasons, controlled society with relative impunity and dispensed  patronage .

They built a temple instead of a legislature. Did they contemplate the overthrow of democracy and the installation of an authoritarian pagan theocracy, presumably the Masonic hierarchy?

Built for the ages, is the legislature intended to become a religious center in the New World Order, perhaps after a nuclear war? Is the temple going to be the seat of government? Obviously I want to be wrong about all of this.

However, experts like lawyer Constance Cumbey says that the money elites are preparing exactly this kind of  "New Age" government and religion.

Background
Freemasonry is empowered by the London-based central banking cartel as a way of corrupting and controlling society. Privately they refer to Freemasonry as "a madhouse but at liberty."

Masonry espouses Lucifer's rebellion against God, which is the central characteristic of the "Enlightenment" and modern western culture.

Essentially "Lucifer's rebellion against God" means that the very rich, (i.e. the Rothschild Central banking cartel) and not the Creator, will define reality and determine the future of the human race. Truth and Justice will be whatever they decide.

Zionism and Communism were organized as Masonic lodges. Marx, Lenin, Trotsky, Stalin, FDR, Churchill and Hitler were all Illuminati, which is the highest rank of Freemasonry. Hitler was created by Theosophy and the Thule Society.  G.W. Bush and John Kerry are also Illuminati. The rank and file Freemason is not told any of this.

Does Freemasonry serve the devil? Does a benevolent society have to be secret? Does it threaten to cut the throat of initiates who talk? Does it demand its members assist each other even when they are breaking the law or being immoral?

Freemasonry pretends to be concerned with moral uplift.  Given its incredible power, is the world becoming a better place? "Know them by their fruit."

In fact, the Illuminati literally represent a malevolent supernatural force that is waging pitiless war on humanity. It is gradually creating Hell on earth.

It wages war-using war. It turns us against each other by deceiving and dividing us. The enemy is not ordinary people, many of whom have based their identity on falsehoods. We need to unite against the puppet masters and their agents.

"In Plain View"
The Freemasons have a philosophy of "hiding in plain view." Theirs is an "open conspiracy." That means they'll talk about it openly but then deny or prevaricate if there is any heat. Their Luciferian power is rising before our eyes but if someone notices, he is attacked and called "paranoid."

Illuminati symbolism is on the US Great Seal and the US dollar bill. It is in the logos of countless corporations. CBS, AOL, Exxon, Shell. The horned goat satanic symbol is becoming omnipresent, especially among youth. They are using it to advertise Yahoo Messenger now. Of course, they'll say it represents something else. That's how it works.

I can't go anywhere without seeing the new logo of the city of Winnipeg. It has  Illuminati motifs. A dot in a circle evokes the original Illuminati symbol , representing the Eye of Horus, or the sexual act. This is over a swoosh representing the sunrise, i.e. the Sun, or Lucifer the light bringer.

This logo is on all City of Winnipeg buses and trucks. Winnipeg always has been an occult headquarters. At the center of the continent, apparently part of the earth's "energy grid" runs right through the legislature. Recently the province adopted the motto "Spirited Energy."

After attending a séance here in 1923, Sir Arthur Conan Doyle wrote, "Winnipeg stands very high among the places we have visited for psychic possibilities."

(Between 1870 and 1970, Manitoba had 12 Premiers who were masons. Several city mayors were also masons, including Francis Cornish, Winnipeg's first mayor. Between 1870 and and 1924, over 140 masonic lodges were established in Manitoba and, between 1875 and 1970, 86 masonic corner stones were laid in public buildings throughout the province, including city hall, many churches and many schools.)

There are probably a lot of public buildings that have been surreptitiously co-opted by the Freemasons. The Israeli Supreme Court  immediately comes to mind.

There are too many occult symbols in the Manitoba Legislature to mention. The most obvious is the statue of the "Golden Boy" on the dome. Manitobans have been told that he represents "Spirit of Enterprise."

In fact he is Hermes, the god of alchemy, patron of the occult and messenger to the underworld. Sculptural groups representing the noble elements Earth Water Air and Fire, (the materia prima of the Hermetic alchemist) surround him on the dome.

Hermes promises to lift man to god-like status by virtue of "secret knowledge" rather than by self-purification and devotion to God, (justice, truth and Love.) He is facing north, which apparently also has ominous connotations.

When the Free Press series ran in November, there was a lot of interest from Manitobans but few no objections. No people seemed to mind that a public institution representing  freedom and prosperity for Manitobans was taken over by an occult society for its own bizarre purpose, at taxpayers expense.

In Letters to the Editor, only two commented on the fact that the political heart of an ostensibly Christian society, (at least in 1912) should be represented by heathen symbolism.

The Freemasons seem happy to hide in plain sight. Ronald Stern and Bob Stern, local textile tycoons, bought the Winnipeg Free Press in 2001. Shortly after, the Bnai B'rith, a Jewish Masonic Order, honored them. The newspaper would not have run this series if Freemasons were afraid to reveal their handiwork.

We live in a world where a large segment of the leadership class has sold itself, if not to Satan, to people who worship Satan..

This is what happens when we eschew genuine religion in favor of  diversity and secularism. We don’t get religious neutrality, tolerance and freedom. We get paganism and Satanism. In hindsight, the "separation of church and state" was a tactic by which dark forces have discredited God and taken control of society.

Satan's success is partly due to our failure to revitalize our image of God. God is the principle of our own development.We can no more deny our need for Him than our need for oxygen. As far as humanity is concerned, God represents our spritual ideals: peace, harmony, beauty, truth, goodness, justice and love.

God depends on us to do His work. He is not a magician. He is the Creator. He works through us. Worshiping God is as simple as telling the truth and doing the right thing.

Prophesies of  tribulation and doom can be self fulfilling. The Messiah may not appear. We need to use our common sense. The port is reached mostly by avoiding the rocks.