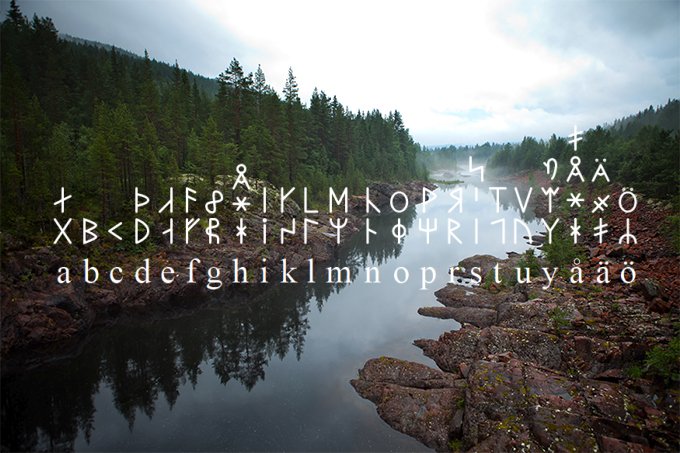 Usually we associate runic alphabet with the Vikings. But in a remote, isolated part of Sweden they used runes until just 100 years ago. People in the region also speak their own language: "Älvdalsk." (Elfdalian in English)

Most people associate runes with Viking times, the Jelling stones or Gorm the Old.

But in Älvdalen in mid-western Sweden locals continued to use runes for centuries after the written language was dropped in the rest of Scandinavia.

In the shelter of the large Swedish forests the runes were able to continue right up until the early 1900s, just as the residents also retained its own unique language - Älvdalsk - which is considered to be a real treasure for Scandinavian linguists.

"Älvdalen is really something special. Firstly, because they speak a unique Old Norse language, but also because they used runes until around 100 years ago. It is simply fascinating, "says Michael Lerche Nielsen, Associate Professor at the Department of Scandinavian Research at Copenhagen University. 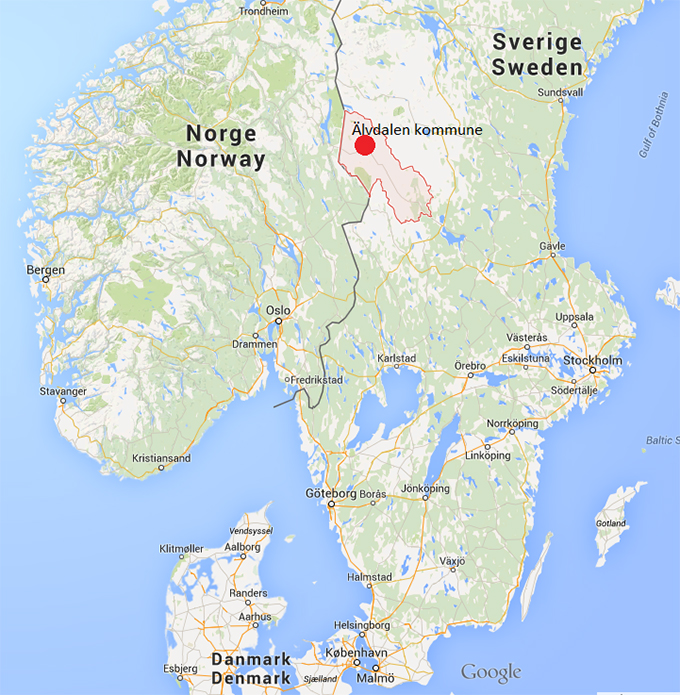 Thursday, he holds presentations on the special runes from Älvdalen at a conference on Elfdalian University of Copenhagen. (May 7th. 2015)

Exceptional that runes were used so late

In Denmark and other Nordic countries the runes were the dominant written language until Christianity began its aggressive foray into Scandinavia 800-900 century. Christianity brought the Latin alphabet, which is the alphabet we still learn in school, the same you are reading right now.

During the 1400s the Latin alphabet had almost completely eradicated the use of runes - but not in Älvdalen. Here, the Swedish linguist Henrik Rosenkvist has recently seen a letter from 1906, partially written with runes.

"The runes we see in Älvdalen, is probably the last use of runes that we know of. Most other use of runes died out during the Middle Ages, so it is exceptional for the runes to have been used this late," says Associate Professor Henrik Rosenqvist, who speaks and does research on the unique language spoken in Älvdalen.

The Danish rune researcher Michael Lerche Nielsen agrees that the people of Älvdalen was the last "ordinary people" - as opposed to non scientists, antiquity enthusiasts and rune mages - who made use of runes.

"The use of Runes in Scandinavia subsided during the 1400s. There are few areas in Gotland and Iceland, where rune tradition continued until the 1600s. But in Älvdalen it was used right up until the early 1900s," says Michael Lerche Nielsen.

According to Michael Lerche Nielsen, the runes in Älvdalen are often found in houses, on furniture and similar places.

In addition, the runes also scratched into the so-called budkævler - wooden sticks, which were circulated with messages between the farms in the area.

"The people who looked after their cattle out by the mountains, could also be found to write messages to each other with runes," says Michael Lerche Nielsen, who himself visited Älvdalen.

He says that it's a case where a harsh landscape has isolated Älvdalen from the rest of Sweden by mountains, forests and lakes.

Isolation made the runes and the language survive

According to Michael Lerche Nielsen, just isolation from the rest of the country, is one of the reasons why both the runes and the special language Älvdalska / Elfdalian have been able to survive, while the rest of the country was flooded with Latin script, German words and modern Standardized Swedish (rikssvenska). 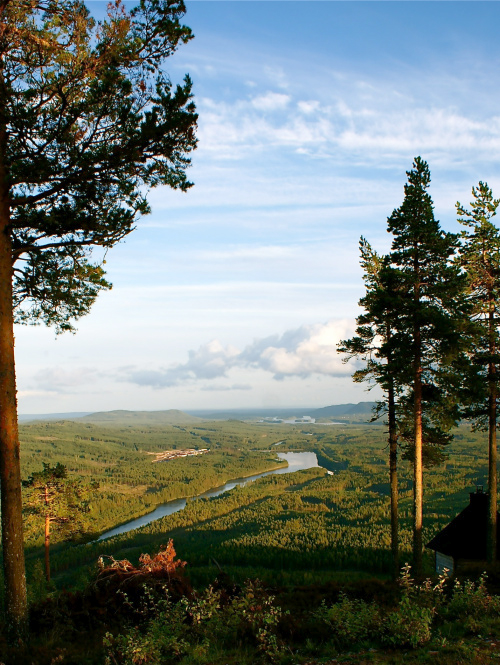 "Älvdalen is extremely deep in the Swedish forests and mountains. You can sail up there through Dalälven - that's over 100 kilometers, and in the past it was a great undertaking to travel back and forth. So people have not been very mobile in the area. Therefore, they have been able to keep this one special folk culture, which in Sweden has been regarded as very traditional and old-fashioned, "says Michael Lerche Nielsen. (Ed note: Oh the horror, something old and traditional. It'll be time to exterminate them soon then and ASAP flood the area with enlightened, liberal, urban social justice warriors from the city, who can bring hip-hop and corporate monoculture to the area.)

Runes of Älvdalen - dalrunerne - reminiscent of runes which were used in Denmark, for example on the Jelling Stone, but there are still several differences. Dalrunerne evolved over time under the influence of, among other things the Latin alphabet. Above are the runes, as they appeared in the period up until the 20th century.

If you ask the Swedish linguist Henrik Rosenkvist he has a similar explanation for why people in Älvdalen continued to use runes, while the old script had long since ended in the rest of the country.

"People in Älvdalen are a bit conservative, in a good way. They kept very much to themselves, "says Henrik Rosenqvist. (Ed note: Oh ok, well thank you for clarifying that they are conservatives in a "good way." We were momentarily horrified there for a bit, thinking there there are 2500 or so, real genuine "backwards" conservative people alive in Sweden. That would just have been too much to bare. On a more serious note, this then proves that separation preserves culture, preserves differences, preserves REAL diversity and hence uniqueness is preserved with a healthy level of separation.)

Rosenqvist continues: "another important reason is that it was not compulsory to send children to school in Sweden. Until the mid-1800s, there were many children who were not sent to school, and until then, people in the area just used runes as their written language. But after they started going to school, they taught exclusively the Latin alphabet and so runes went extinct over time. " (Ed note: today even homeschooling is outlawed in Sweden. Over time therefore the government has complete control over removing any cultural nuances from the people and dialects from the standardized language.)

Runes of Älvdalen - known as Dalrunerna (Dalecarlian runes in English) - are reminiscent in many ways of the elder and younger Futhark Runes, that we see on all the Rune stones, all around the Nordic countries.

But there are other characteristic of the Dalrunerna, says Michael Lerche Nielsen.

"The old rune stones in Denmark only has 16 different runic characters. That is of course fewer letters than the Latin alphabet. The lack of letters, has been solved in in Älvdalen by gradually introducing new runes or they copied letters from the Latin alphabet. So there's clearly been a development with the runes, and they have had a fascinating "afterlife" in Älvdalen, "says Nielsen.

An example of a particular feature of the Älvdalska runes would be that, while runes from the Viking age wrote the letter 'i' with a vertical line, people in Älvdalen over time, started to put a dot over the line.

"It is a clear spillover from the Latin letters. People in Älvdalen has not been more isolated then that they were subject to the Swedish state church and has been under the influence of the Bible and biblical language after the Reformation, "says Michael Nielsen.


In the video you can hear the Swedish Associate Professor Yair Sapir talk Elvdalsk.

Dalrunerna has been known in the scholarly world ever since the Swedish linguist Johannes Bureus gave a famous rune board to his king, in 1599.

Dalrunerna were also addressed in the Nordic Culture volume on runes in 1933, but otherwise it has "been scarce scientific interest," says Nielsen.

The same applies to the interest in the local language Elfdalian / Älvdalska that scientists only really became aware of 10-15 years ago.

Sweden has not recognized Elfdalian as an official language, but among linguists is Elfdalian today is not 'just' considered to be a dialect, but an actual language, says Henrik Rosenqvist.

Ed note: What the authors are leaving out is that Elfdalian / Älvdalska was once a banned language in Sweden. The Swedish language was standardized after World War II and hundreds of nuanced dialects were destroyed. However, The Swedish government have been quick to recognize both Yiddish and Romani (Language of Gypsies) as a "minority language" well before Elfdalian / Älvdalska was recognized as one and further studied.

"It sounds a bit like a mix between Faroese and Icelandic. If you only speak Swedish, one understands not a word. Nothing," says Henrik Rosenqvist, who researches Elfdalian by the institution for Swedish our language at the University of Gothenburg.

Elfdalian are echoes of our ancestors language

For language historians Elfdalian / Älvdalska is especially interesting because it can give an insight into how our Nordic ancestors spoke before the Icelandic sagas were written.

"Linguistically Elfdalian is a true treasure for us language researchers. It is in some areas very conservative - in fact, it is at least as conservative as old Norse of the Viking, that is why it sometimes seems to function as a kind of linguistic "deep freeze," where one can get a glimpse of the language features that would otherwise have long since vanished in the other Nordic languages," says postdoctoral Bjarne Simmelkjær Sandsgaard Hansen in a press release that the University of Copenhagen has issued in connection with the Conference on Elfdalian.

They stress, however, that Elfdalian has not been completely frozen since Viking times, but has developed several new and interesting features.

Dalrunerne are typically scratched in houses, on furniture or on wooden sticks (or logs). Above is Dalruner (Dala Runes) from 1635 on Orsblecksloftet in Zorn Gammelgård in the city Mora.

"Elfdalian has not only preserved the older language features, but also developed many new, many of which are unique to the Scandinavian languages. The language has not only been in a "deep freeze," but it's also been in a greenhouse, (to grow) "stresses Henrik Rosenqvist.

Previously it was a shame to talk Älvdalsk

Today, Elfdalian is spoken by barely 2,500 people, and the language has for decades been under strong pressure from the standardized language that national Swedish mass media use, and a school where Elfdalian was not allowed to be used.

"In the '70s was one beaten at school if we spoke Elfdalian. It was associated with shame, and many parents did not teach their children Elfdalian."

"But it has changed over the last 15-20 years. Now many people were proud to talk Elfdalian and there are organized courses in Elfdalian, written books and locally seen to do what you can to keep the language alive, "says Henrik Rosenqvist.

In the year 2005, for the first time a standardized written language for Elfdalian was presented and the association Ulum Dalska ('We shall speak Elfdalian') struggle to get Elfdalian recognized as an official regional language in Sweden - and to have it introduced in schools.

"Elfdalian meets all criteria for being recognized as an independent language, and we are more who are trying to get the Swedish government to recognize Elfdalian as a minority language."

"The European Council has asked Sweden to reconsider whether Elfdalian must be an official language, but nothing happens. I think it is related to that Sweden is a very modern country, and Elfdalian comes from a very traditional rural area, where the rural population is poor and not affected. There is no interest for Älvdalsk among people in the cities and in the elite, "says Henrik Rosenqvist.

Elfdalian-conference can be followed on the Web

University of Copenhagen is to holds its third conference on Elfdalian - the first was held in Älvdalen in 2004.

At the Conference, there will be research presented on Dalrunernes origin, the development and the spread of Elfdalian among children. For language and grammar geeks there are also lectures with titles such as "The elvdalske rodnominers categorization and etymology" and "Nya rön on älvdalskans adjektivmorfologi" (New findings on Elfdalian adjective morphology).

The conference will be streamed live from the University of Copenhagen and can be seen Thursday, May 7 and Friday 8 May 2015 on the University's website.