Jun 22, 2014 Source: nationalistasatrunews.com
Comment: This is just a remarkable and shocking story that speaks to the amazing double standard and contradictory behavior of Israel. Why is the Swedish media are not talking about this? Why are we not allowed to decide and vote for our own self determination and decide the fate of our own people and what future direction we should have in Sweden? As youth unemployment among immigrants in Sweden skyrockets, the burden is becoming too great and most of the people coming in are destined to a life living on the welfare state and burdened an already maxed out tax structure that can’t even provide for our own failing schools system and crumbling health care system.

....and of course as a native Sweden you’ll soon be prosecuted for criticizing this suicidal behaviour. 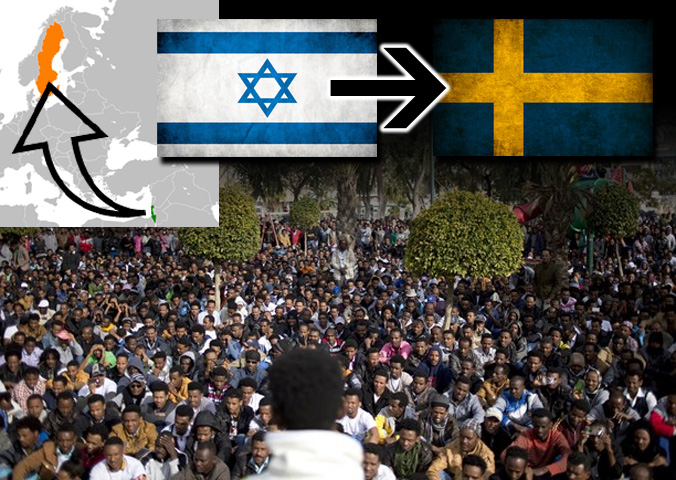 African migrants gather during a Tel Aviv protest. Some 60,000 Africans, mostly from Sudan and Eritrea, have trekked through Egypt and other Muslim countries to reach Israel in recent years. Photo: Ariel Schalit/AP

A horrific headline and simultaneously a perfect demonstration of the truth occurs every so often and this is one of them, headlines like this, are in the wider media world hidden away, not by bigger headlines, but simply as a result of the quiet, fanatically manipulative efforts of numerous Jewish news editors, their christian-socialist friends and thus entire news agencies, who will do everything to keep the Northern European general population from knowing the truth, they even attempt to keep the racially aware Europeans from knowing the truth, for if the public knew the truth it would cause massive, near terminal damage to the reputation of Jews worldwide and if we find out, we seek to tell our people that they are under assault from Jewish supremacists, almost every area of life is degraded by the efforts of Jewish supremacists, through immigration, degenerate cultural programs or through the banks.

Our folk are starting to wake up to the reality of the genocidal campaign being waged by Jewish-bigots against Northern Europeans, anti-immigrant sentiments at historic highs and the reputation of the Jewish supremacist state and the reality of Jewish spite-fullness are becoming well-known. In this case, it is not just a Jewish agency or two, like Paideia or H.I.A.S promoting and assisting massive numbers of non-whites to invade Northern European and other White countries, now Israel too is engaging directly in the genocidal campaign against Northern Europeans.

It is time this genocidal Jewish-led, authored and executed campaign is exposed.

The Israeli Interior ministry stated that it has exported countless non-white immigrants to Sweden, directly, paying each immigrant 3,500 dollars each to leave Israel.

The immigrants departed Israel on the condition that they do not return to the Jewish state, but stay in Nordic Sweden instead.

The immigrants were then put on flights to Sweden en-masse, this has been likely occurring for decades, although it has only recently been exposed via a propaganda failure on behalf of Haaretz, which let the story slip.

It has been known for decades, if not a century that Jewish-supremacists have sought to and thus have used non-white immigrants to break down and break up racial solidarity and the racial homogeneity of the best European nations.

Israel itself (in addition to countless Jewish activists) is currently importing non-white immigrants into European nations to be used as voting blocks, cultural revolution shock-troops and genetic weapons of mass degradation against all majority European nations, utilizing such to destroy two white nations already, namely Rhodesia and South Africa.

Most of these non-white immigrants will have genetic IQs ranging in the low 60-80 range, with a high predisposition to have larger families of 5-7 children, in addition to often resorting to criminal activity, such as smuggling of drugs or prostitution in addition to living on welfare.

It is estimated in the UK that 75%+ of non-white women are unemployed, this figure is likely similar, if not higher in Sweden, destroying the argument that non-white immigration has any economic benefits, to anyone other than Jewish supremacists.

Many of the Eritreans exported from Israel to Sweden in this instance are female ex-prostitutes and so called ‘victims’ of persecution, making them likely to continue such a lifestyle in Sweden. Israel is literally exporting non-white criminals (drug users, prostitutes) into Sweden, in what is an obvious attack on Sweden’s demographics, whilst also being a self-serving demographic action on behalf of the Jewish supremacist state.

The crime epidemic caused by these non-white immigrants in Sweden is culturally and economically crippling, the non-white immigrants Israel is exporting are especially degrading, the leading role Jewish supremacists are conducting in the destruction of our nations and people could not be more obvious, the influence of Hollywood is less obvious than this, we have a case of the state of Israel directly authorizing and exporting non-whites to Sweden…

In only the first seven months of 2013, over 1,000 Swedish women were reported as having been raped by non-white immigrants, primarily Muslims (a semitic religion like Judaism and Christianity ultimately) in the capital city of Stockholm alone, the figure is colossal over Sweden as a whole. Over 300 of those reported in Stockholm were of girls under the age of 15. Fortunately none of these rapes resulted in pregnancies, and contraceptives find a racially beneficial role in deployment as a post-rape solution to what would otherwise be an ethnic assault, in a situation where the government does nothing and it is up to the people to resist themselves.

These numbers of rape caused by non-white immigrants, Somalians primarily, and other Africans and Asians, are only the tip of the iceberg.

According to the authorities, Sweden’s real rape statistics are 400-900% higher than official numbers.

“As few as 10-20 percent of all sexual offences are reported to the police.”

Israel has been giving 3,500 dollars equivalent for each immigrant to leave Israel and go to Sweden for several years, where these non-white immigrants go on to incur negative costs to Sweden equivalent to roughly 438,00 pounds each, according to the Norwegian comparison (the best comparison available).

Israel should be paying Sweden 438,000 pounds per immigrant, and in-fact should be paying for all the non-white immigration caused by Jewish lobbyists and activists, who are in reality genocidal manipulators in all but name.

The Jewish state should, according to the massive non-white immigration rates and degradation of European nations, be financially, morally and militarily indebted for eternity for its demographic crimes against Europeans, but it is not, it is in-fact going on the offensive, unrelentingly, whilst taking payments of aid from our government, that help keep their state borders immigrant-proof.

To put the above headline into perspective: Jews demand DNA tests for long-term immigrants who go to Israel seeking to be residents (to check they are Jews), whilst the European Commission in accordance with lobbying from the European Jewish Congress and the Jewish UN migration chief openly has declared its aim to “undermine the homogeniety of Europe”. Jewish-inspired policy goes further, with the promotion of Orwellian punishments and brainwashing for youths who display signs of ‘intolerance’, in accordance with the legislation being pushed right now through the EU by Moshe Kantor, the EJP and the European Jewish Congress.

Paideia , a Jewish lobby group promoting anti-white propaganda, mass-immigration and integration (extermination of white people) openly advocates White genocide and reducing European states to mediocre multi-ethnic states engulfed in civil disturbances and war, even the idea of creating high-crime rate multi-ethnic states is not the final aim of their policies, the so called ‘ideal’ (a Jewish-racist ideal) of multiculturalism is nothing more than an excuse under which Jewish supremacists permit themselves the necessary propaganda cover, to promote and work towards exterminating Europeans.

That is the sincerity of our situation, every time a Jewish activist uses any of the terms such as multi-culturalism, tolerance, integration, pluralistic society, one can be 100% sure that all they mean is: whatever it takes to destroy Europe and Europeans themselves.

To further put the story into perspective: Jewish groups advised the Greek government to arrest Golden Dawn, as has been documented, for standing up for the racial interests of Europeans, which has subsequently occurred, the Golden Dawn leaders are still in jail today, whilst the Israeli state is pursuing its own racial agenda, whilst simultaneously spiting European nations and engaging in subversion, using their diaspora population.

“I think there’s a resurgence of anti-Semitism because at this point in time Europe has not yet learned how to be multicultural, and I think we’re going be part of the throes of that transformation, which must take place.

“Europe is not going to be the monolithic societies [sic] that they once were in the last century. Jews are going to be at the center of that. It’s a huge transformation for Europe to make.

They are now going into a multicultural mode, and Jews will be resented because of our leading role.”

No rational mind could explain such Jewish behaviour away as hypocrisy or mere double standards, it is far, far worse than that, from their perspective there is no hypocrisy, and they think their agenda is the most moral one, in reality it is one coherent chain of policies, ideologies and manipulative persons working towards the destruction of us Northern Europeans as their highest and most fanatically driven objective.

This assault on our nations must be publicized, opposed, annihilated and then reversed, not just because of a moral or philosophically ethical motivation for saving our nations, but because it must be stopped for our survival, which is the ultimate expression of morality, the general public need to know this, they are the majority of our folk, and the future like it or not relies on their enlightenment to their own situation, thankfully public opinion is growing against the Jewish state and Jewish promoted and enacted mass-immigration at colossal rates.

Finally in 2014 the future of our effort to awaken our folk is heading towards producing tangible results and revolutionary beginnings, although it will take at least a decade more of CONCENTRATED efforts to emerge victorious.

Imagine if this situation was REVERSED! Like in the below example, can you imagine the outcry?