Jimmy Savile: A Prime Example of an Entertainment Industry Abuser Protected by the Elite 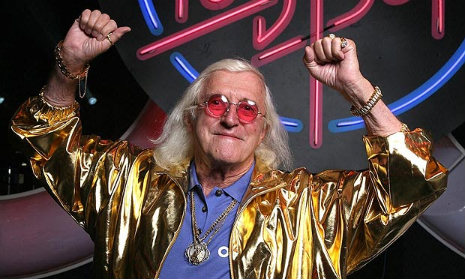 Jimmy Savile is considered to be a British TV icon who hosted popular shows like Jim’ll Fix It and Top of the Pops. His decades of presence in pop culture has led him to obtain an incredible amount of “elite” recognition such as Officer of the Order of the British Empire, Cross of Merit of the Order and Freeman of the Borough of Scarborough. He was also knighted by the Queen herself (God save her) “for charitable services” and obtained Papal knighthood from Jean-Paul II, making him a Knight Commander of the Order of Saint Gregory the Great.

But now, over a year after his death, the disgusting, ugly truth about this disgusting ugly character is being revealed by British newspapers: He sexually abused a great number of children and adults during his career, terrifying, manipulating and traumatizing them, while enjoying total immunity. Now that the cat’s out of the box, many startling allegations are surfacing: Savile apparently abused young girls in the backstage of his show Top of the Pops; one of his victims was a young as nine years old; he was given a room at a hospital for the criminally insane where he abused patients and his trips to children’s hospitals for charities were used as a chance to abuse sick children.

The worst fact about this story is that Savile’s “tendencies” were well known by the police and by the BBC (his employer, which is, by the way, funded by British taxpayers) for years but nothing was ever done to stop him. Quite to the contrary, while Savile was aggressively preying on children, the BBC covered up his crimes while the police took bribes and ignored him.

How can such a man enjoy so much immunity and protection? And why did he obtain all of these impressive “titles”? The answer is simple yet awful: He was part of the establishment. He had friends within the elite. He was part of its perverse entertainment industry that is filled with manipulative pedophiles such as himself. He was part of this clique that is above the law. Is it surprising that all of these allegation only surfaced y after his death? No, his “friends” protected him while he was alive and he has never suffered any consequences for his actions.

Read the full article at: vigilantcitizen.com