Purported skeletal remains of John the Baptist have been dated to the first century A.D. and so could conceivably have belonged to the "forerunner of Christ," who baptized Jesus, scientists say. 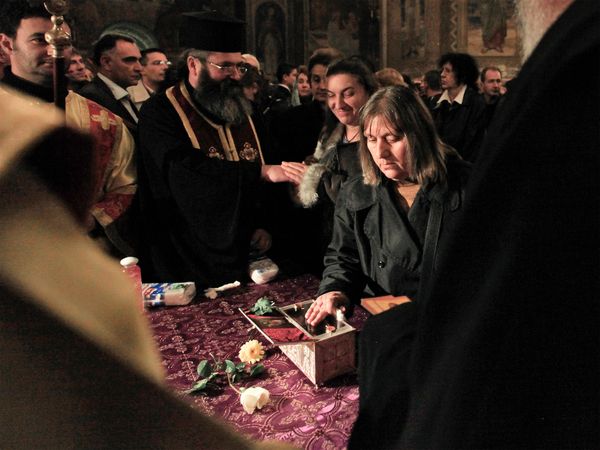 A box holding supposed remains of John the Baptist, displayed at a cathedral in Sofia, Bulgaria.
Photograph by Valentina Petrova, AP

Discovered in 2010 among the ruins of a Bulgarian church, the remains include six human bones: a knucklebone from the right hand, a tooth, part of a cranium, a rib, and an ulna, or forearm bone.

DNA and radiocarbon testing of collagen from the knucklebone show that the remains likely belonged to a Middle Eastern man who lived in the first century A.D., which fits with the story of John the Baptist.

According to the Bible, John was a cousin of Jesus Christ, so the finding means scientists might have DNA from a relative of the Christian savior himself—although proving it is likely impossible.

"The problem is we don’t have a baseline for comparison," said study team member Thomas Higham, an archaeological scientist at the U.K.’s University of Oxford. "We don’t have a solid, reliable piece of bone that belongs to [John the Baptist or Jesus]."

As such, the current study can’t confirm—or for that matter, disprove—that the bones belonged to John the Baptist.

"It’s really stretching it to think that material from the first century can end up all the way in this church in Bulgaria and still be there for archaeologists to excavate," Higham said. "But stranger things have happened."

The fate of John the Baptist’s remains is a topic of much speculation among biblical scholars, but what is known is that, in the third and fourth centuries, reports began to appear of his bones being housed in various churches as holy relics to attract pilgrims—not an uncommon fate for the supposed remains of biblical figures.

"We thought that, since this [Bulgarian] church dates to the fifth century, this gives us a minimum age for this material," Higham said.

"And we thought that perhaps these bones would be fourth or fifth century as well. But we were surprised when they turned out to be much older than that," said Higham, whose work on the bones was funded in part by the National Geographic Society’s Expeditions Council. (National Geographic News is a division of the Society.)

The scientific analysis of the bones hasn’t yet been submitted to a journal, though the results are featured in the National Geographic documentary Head of John the Baptist, airing Thursday in the U.K.

The relics were found during an excavation on the island of Sveti Ivan—"St. John" in Bulgarian. Entombed in a small marble sarcophagus, the bones had been buried beneath the church altar.

For the time being, they’ll remain in Bulgaria as property of the Bulgarian Orthodox Church and are currently being showcased in the country’s capital, Sofia.

Unfortunately, all of the attention has resulted in the theft of a rib bone, and, Higham said, the local bishop has issued an edict saying "hell and damnation will rain down from God, not only on the person who stole it but also on his family and anyone else who knows about it, and even the village where it was taken."

Curiously, three animal bones—from a sheep, a cow, and a horse—were also part of the cache. Tests showed they were about 400 years older than the human remains.

"The animal bones are the biggest of the group, and they may have just been put there to bulk up what looks like a pretty minimal collection of bones ... ," Higham said.

The archaeologists who originally discovered the bones also found a small box made of hardened volcanic ash buried nearby in an older part of the church. The case bears an ancient Greek inscription that mentions John the Baptist and his birthday. It also asks God to "help your servant Thomas."

One theory is that "Thomas" brought the box—which tests suggest originated from Cappadocia, a region of what’s now Turkey—to the island.

"We think this box was the original box that brought the bones to the island," Higham said. "When the new church was built, the bones were put into the marble sarcophagus."

Hard to Identify, Then and Now

While the new results suggest the bones are from John the Baptist’s time and place, archaeologist Andrew Millard said scientists will probably never be able to definitively say whether the relics belonged to the biblical figure.

"Whether they’re the remains of John the Baptist or whether they were simply obtained from another first-century tomb, we can’t tell," said Millard, of the U.K.’s University of Durham, who wasn’t part of the study.

"The question really is how well they could have identified the remains of John the Baptist in the fourth century. They could’ve opened the wrong tomb in a cemetery."

Pierre Sabak - Priesthood of the Nazarenes, The Nazis & Zionists