Karl Marx Lived In Filth And Neglected His Children

WHEN AN EDUCATED MAN CHOOSES TO LIVE IN POVERTY, AND RAISE HIS CHILDREN IN POVERTY, THAT IS ABUSE. 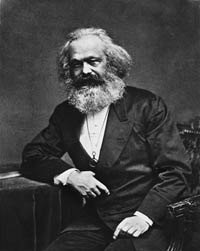 When Marx and his wife and children were living in London, a visitor wrote a description of their lifestyle in their 3-room flat.

Not only did the Marx children have to endure the hunger of poverty, they were raised in filth, or what his friend described as "a pig-sty".

There was not one good piece of furniture in the flat. There was a chair with a leg missing, a sofa "tattered and torn".

The table where Marx sat on his backside to read and write was covered with pages of his writings, with newspapers and books, his glasses, his inkstand and pen, and his pipe, as well as dirty and chipped tea cups, dirty spoons, and whatever else someone dropped there, such as some children’s playthings and his wife’s sewing.

Everything in his flat, according to his friend, was dirty and covered with dust.

The flat was also in one of the worst sections of London, where the rent was low.

Marx and his wife knew each other as children and married when Marx was twenty-five, not so young in those days of 1843. He would have been considered a grown man, mature and able to assume the responsibilities of husband and father.

Both Marx and his wife came from comfortable homes, hers more prominent. Her father was a Prussian Baron. And she, Jenny, was an educated woman when she married Marx.

Together they had 7 children. Four of those children died young. Only three survived to achieve adulthood.

Every biography of Marx reports that his four children who died young died because of the poverty they had to endure.

The Marx way of life has been described as a hand-to-mouth existance, which generally means you don’t know where your next meal is coming from.

Marx occasionally wrote articles for newspapers and he wrote his long papers and books full of his philosophies about the ’struggle’ of workers, but he never worked a day in his life.

Instead, he sat in his pig-sty and found all sorts of reasons he shouldn’t work.

Mainly, he thought he was too important to work.

Marx wrote that a slave needs a master and the master needs a slave. And that opposites must be equalled. And that a slave cannot be separated from his master.

Care to argue with that nonsense?

I’ve known men like Marx. They’re just plain lazy. As he was. He didn’t want to work, he wanted to sit in the filth at his table and pretend to be thinking important thoughts.

Marx was also a hypocrite. While he wrote with such sympathy for the men who worked in factories, calling them slaves, the money he lived on, the charity he received from his friend Friedrich Engels, came from the Engels family interest in a factory. So the ’slaves’ were supporting the Marx family, while Marx sat and thought.

Watching his children go hungry, seeing them live in filth, is neglect. It is abuse. There was no need for it. He had an education and could have earned an income, and he knew where he had come from, a comfortable life with his parents. He could have provided for his family as his father had provided for him, but obviously that was not important to him.

Karl Marx was not well known in his lifetime. It was only a small circle of fellow Communists who knew who he was by his writings.

An eighth child was born to Marx, but not with his wife. It was an illigitimate child.

As it happened, Jenny, Karl’s wife, received an inheritance and so she hired a housekeeper to oversee their better quarters. His eighth child was born to the housekeeper.

Marx tried to convince his wife that the child had been fathered by his friend Engels, but she didn’t believe him. Let’s add liar to his description.

Eventually, Marx admitted the truth. The child was his son.

No one ever reported the housekeeper’s side of the story. Had she been a willing partner for Marx? Or did he take advantage of her lowly position in his home? Personally, I think he saw her as nothing but a servant and one he could ’have his way’ with.

By any standard, Marx’ life was a failure, as a husband, as a father, as a provider.

His theory of Marxism has been a failure, too. The Soviet Union failed dramatically. Cuba’s people live in poverty. And in North Korea the people truly are slaves to their Marxist beloved leader.

Under Marxism, more than one hundred million people have died, either from being murdered or from starvation.

When a man in his selfishness and laziness is willing to watch his own children die from the poverty he has imposed on them, of course his philosophy will do the same to anyone forced to endure it.

Marx abused his children, his wife, his housekeeper, and Marxism continues to abuse everyone living under a brutally uncaring Marxist government.