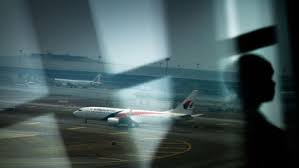 If only we monitored all people. If only we monitored all places. Perhaps we’d know where Malaysia Airlines Flight MH370 is.
If only we were all-seeing and all-knowing, nothing BAD could happen ever again.
This line of thinking will take us beyond national, international, and global surveillance, and deep into the realm of monitoring the brain and the very thoughts in our heads. This is not outlandish or unappealing to those who seek ultimate control.

Meanwhile, continuing ocean searches fail to locate the flight, while the time for locating the black box is running out. There is also silence meeting the question of why US Diego Garcia military base was not able to detect the plane during its flight.

More from Activist Post on using Flight MH370 as a pretext to total surveillance...

[...]China cited the frustrating, so far failed, search for Malaysia Airlines flight MH370 as a reason to expand its global scope of surveillance which has gained support from Beijing lawmakers.

“If we had a global monitoring network today, we wouldn’t be searching in the dark. We would have a much greater chance to find the plane and trace it to its final position,” Professor Chi Tianhe, a researcher at the Chinese Academy of Sciences’ Institute of Remote Sensing and Digital Earth told The South China Morning Post.

“The plan is being drafted to expand our regional monitoring capability to global coverage.”

If the plan gets the go-ahead from lawmakers its expected to launch in as few as two years.

The Chinese government’s current satellite surveillance capabilities are a state secret, though it is thought that most carry out surveillance over China and closely surrounding regions.

There are more than 1,000 satellites in orbit above the earth, most used for communication. According to statistics from the US-based Union of Concerned Scientists, 50 are earth-observation, remote-sensing and military-surveillance satellites.

This is a prime example of government never letting a “crisis go to waste”. (You might remember Rahm Emanuel famously saying.)