One year ago, as he was poised to testify in the case of the disputed 2004 election, Michael Connell met his death in a fiery plane crash. Was he the victim of an unfortunate accident or of a right-wing conspiracy intent on silencing one of its own? 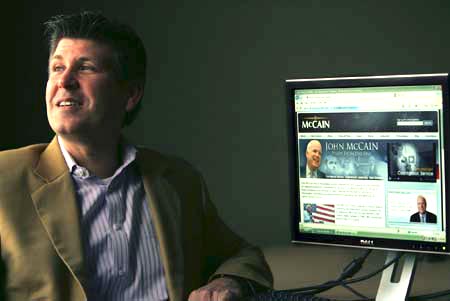 ***
The story for which The BRAD BLOG was awarded a 2010 Project Censored award for "Excellence in Investigative Journalism" is "censored" no more. From the February 2010 issue of Maxim hitting mag racks this week...

The February 2010 issue hits newsstands this week, and should be available on the Internet soon, featuring a detailed investigative feature on the mysterious death of Mike Connell, the George W. Bush/Karl Rove/GOP "IT Guru" described as a "'High IQ Forrest Gump" for his proclivity to be at the scene of so many Bush/Rove/GOP crimes over the years. 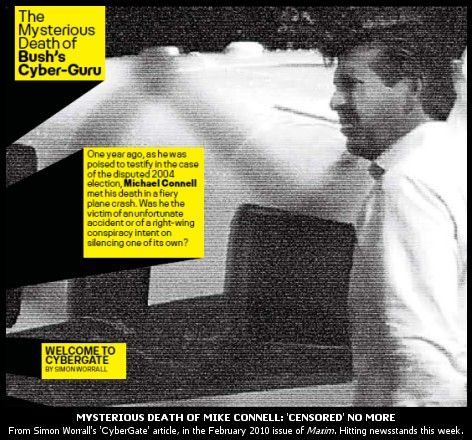 The 3,500-word Maxim piece was penned by British investigative journalist and author Simon Worrall after a year or so of digging, following the startling tragic death of Connell in December of 2008. The long-reliable Republican IT entrepreneur was on his way home from D.C. to his company's Christmas party near Akron, Ohio, when his single engine Piper Saratoga plunged from the sky for reasons that remain unexplained to this day.

Connell's companies GovTech and New Media Communications created scads of GOP and other far right websites and political database operations, the infamous secret GWB43.com parallel White House email system, the network firewall in Congress for the Judiciary and Intelligence committees, and, perhaps most notably here, the 2004 Election Night results reporting system for Ohio's fiercely partisan then Sec. of State J. Kenneth Blackwell. That system has been alleged by some, including the attorneys bringing a long-standing election fraud lawsuit in Ohio, to have been used to manipulate final tallies as the country waited late into the evening for the Buckeye State to ultimately decide the Presidency that year.

(A short clip focusing on Connell's then-known role in the '04 election debacle, from John Ennis' superb documentary Free For All!: One Dude's Quest To Save Democracy, released prior to Connell's death in 2008, is above. It gives a quick idea of the important role that Connell played in the larger, still-unexplained picture.)


Just over a month prior to his death --- the day prior to the 2008 general election, in fact --- Connell was compelled to give a deposition in the ongoing 2004 election fraud lawsuit, as he had earlier been said to have been guilt-ridden and ready to spill the beans about what had really happened in Ohio in 2004. After word of his intentions to tell what he knew had made its way onto the Internet, allegations that he had been threatened by Karl Rove to take the fall followed. Connell began shutting up. While he was subpoenaed and compelled to appear for a deposition in November of 2008, that deposition remains sealed by federal court order, and Connell would die before he was allowed to serve as a witness in the case. 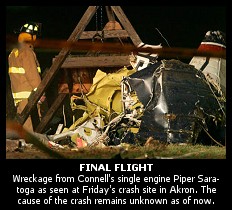 The National Transportation Safety Board (NTSB) has yet to release a cause for Connell's crash on his solo, and final flight home. But as The BRAD BLOG reported on two occasions last year, Connell's family members have grown more and more suspicious of the circumstances under which the experienced pilot ended up crashing to the ground just prior to his scheduled landing at the Akron-Canton Regional Airport days before Christmas a little more than a year ago.

His wife Heather has grown increasingly angry according to Worrall, at what appears to be a rather curious investigation. "I have pieces of my husband's brain!," she is quoted as telling him in the Maxim article which The BRAD BLOG was given an early embargoed look at. "I picked them up with my hands six days after the crash. Chunks of his skin and internal organs. How is that a proper investigation? How is that acceptable?" she asks, while wondering why his ever-present BlackBerry, and it's many phone numbers, notes, files and contacts, is still missing, even though his backpack was found still zipped with the matching Bluetooth earpiece still inside.

On that BlackBerry were "hundreds, if not thousands, of sensitive files and e-mails relating to Karl Rove and the Bush administration," explains Worrall. "I want to know where my husband's phone is," Heather tells him "angrily" in the piece.

As Heather grows more furious and curious, Mike's sister Shannon, as Worrall reports, says she is "convinced he was murdered."

"I think they played him," Shannon says, "His death would have been a really nice Christmas present for Rove and Cheney."

Worrall pulls together the entire story for the bulk of the world which remains unfamiliar with any of it. Despite how close Connell was said to have been with Rove, and how important he was to so many high officials in the GOP, including John McCain whose campaign website he also built, none of them ever released an official statement on his death to our knowledge.

The Maxim piece also adds a number of other previously unreported details along the way. Among them:

During his calls to the tower, after word of the crash, a Greentown Fire Department official is quoted as explaining the he was told "the tower was in lockdown and that no information was available."

The night crash scene, which would normally be roped off and investigated in daylight, was lit by towers, photographed and documented by officials from the NTSB and FAA, and then "Connell's plane was hastily removed to a secure hangar under the cover of darkness. By 6 A.M. the investigators had vanished, leaving behind them a trail of debris and one very angry widow."

Connell's final words, just after screaming "Nine nine November declaring an emergency!" were "Oh, fuck!" and then silence as the control tower tape goes dead. Officials reported his last words as "Oh, God!" out of purported respect to Connell's deep Catholic religious beliefs. [Note: We've heard those recordings, and can confirm Worrall's reportage here, though we don't believe we've ever reported specifically on them, or publicly released the audio on The BRAD BLOG.]

The contracts between OH Sec. of State Blackwell and Connell, on behalf of GovTech, contradict his testimony that SMARTech, a highly partisan rightwing outfit in Chattanooga, TN, "merely acted as a backup site for election data". SMARTech owns the servers where Ohio's election night reporting system was mysteriously transfered to in the middle of the night as the country was waiting for final results in 2004. The setup allowed for a potential "man-in-the-middle" hack of the data. The contract shows that Connell's company and/or Blackwell had direct remote access to both server systems on Election Night.

Worrall reports that a "deep throat" document anonymously sent to Connell's family and a number of FBI agents last year, purporting to be an "after action report" by a black ops agent tasked with sabotaging Connell's plane --- as we briefly discussed in a report here last November --- is believed to be "genuine" by "a number of experts from the intelligence community" who have seen it.

Robert F. Kennedy Jr., who reported in detail on Ohio's 2004 election debacle for Rolling Stone magazine was interviewed for the story, and tells Worrall that he believes what happened during that election was "more serious than Watergate" as "The Ohio vote undermines the very foundation stone of American democracy." He goes on to call for an "official investigation. Otherwise this becomes a blueprint for how to steal an election from here to eternity."

In a background item on the story over on his own blog, Worrall notes that he "took nearly a year to unravel this compelling, and complicated story."

He writes that "the further I delved into the story, the more I became convinced that the Ohio 04 election --- and with it the White House --- had been stolen by cyberfraud; and that Connell had played a central part." But, he adds, that "if he did, he was the pawn of more powerful forces."

Like Kennedy, he too calls for a "proper, criminal investigation into the election and the circumstances of Connell's plane crash," adding the chilling note: "cyberfraud may well have been the lesser of the crimes committed."

Worrall also promises "more news and information about the article as coverage in other media takes off". Though whether that happens remains to be seen. Either way, he writes, he is currently "in talks with TV and film, both in the UK & USA" about the story.

Perhaps that means that somebody in the corporate mainstream world, or with the power to launch an official, public investigation, may finally take notice.


On September 17, 2008, a Republican election whistleblower and data security expert named Stephen Spoonamore filed a sworn affidavit filed in federal court in the above voter fraud case in which he stated that Mike Connell "agrees that the electronic voting systems in the US are not secure" and that Connell had told Spoonamore in 2007 "that he (Connell) is afraid some of the more ruthless partisans of the GOP may have exploited systems he in part worked on for this purpose." Spoonamore further explained that "Mr. Connell builds front end applications, user interfaces and web sites." Spoonamore said, "I believe however he knows who is doing that [election rigging] work, and has likely turned a blind eye to this activity. Mr. Connell is a devout Catholic. He has admitted to me that in his zeal to 'save the unborn' he may have helped others who have compromised elections. He was clearly uncomfortable when I asked directly about Ohio 2004." [9]

In July 2008, the lead attorney in the King Lincoln Bronzeville Neighborhood Association v. Blackwell case, Cliff Arnebeck, sent a letter to U.S. Attorney General Michael Mukasey seeking protection for Connell as a witness in the case, saying he had been threatened. Arnebeck wrote,

“We have been confidentially informed by a source we believe to be credible that Karl Rove has threatened Michael Connell, a principal witness we have identified in our King Lincoln case in federal court in Columbus, Ohio, that if he does not agree to "take the fall" for election fraud in Ohio, his wife Heather will be prosecuted for supposed lobby law violations."