Newspeak is here: Professors threaten failing grade if students use the terms he or she and male or female 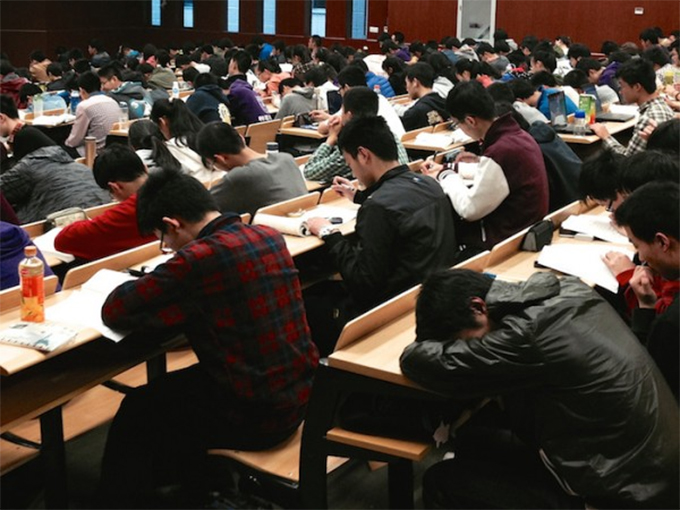 In yet another sign of how far American University’s have fallen to the leftist thought police, multiple professors with at least two colleges are threatening students with failing grades if they use language deemed offensive by the hard left.

“Offensive” and “problematic” terms include illegal alien and illegal immigrant as well as the gender pronouns he and she and male or female. Students could also face a failing grade if they do not “defer” to non-whites.

That’s right, in the new America young citizens who wish to pass their class and be accepted within the “progressive tolerance sphere” must conform to what is essentially the modern-day version of George Orwell’s Newspeak.

Course syllabuses for several different classes at Washington State University make clear that students will be punished if they use normal gender pronouns that their cultural Marxist professors have deemed “oppressive and hateful language.”

An article published by the Campus Reform website details, word for word, the instructions given to students by teachers at WSU.

According to the syllabus for Selena Lester Breikss’ “Women & Popular Culture” class, students risk a failing grade if they use any common descriptors that Breikss considers “oppressive and hateful language.”

The punishment for repeatedly using the banned words, Breikss warns, includes “but [is] not limited to removal from the class without attendance or participation points, failure of the assignment, and— in extreme cases— failure for the semester.”

Not to be outdone by thought policewomen Breikss, Professor Rebecca Fowler has outlawed the term “illegal alien” from being spoken in her classroom. Take note her response when questioned by Campus Reform as it is a classic example of leftist deflection.

Much like in Selena Breikss’s classroom, students taking Professor Rebecca Fowler’s “ Introduction to Comparative Ethnic Studies” course will see their grades suffer if they use the term “illegal alien” in their assigned writing.

According to her syllabus, students will lose one point every time they use the words “illegal alien” or “illegals” rather than the preferred terms of “‘undocumented’ migrants/immigrants/persons.” Throughout the course, Fowler says, students will “come to recognize how white privilege functions in everyday social structures and institutions.”

In an email to Campus Reform, Fowler complained that “the term ‘illegal alien’ has permeated dominant discourses that circulate in the news to the extent that our society has come to associate ALL unauthorized border crossings with those immigrants originating from countries south of our border (and not with Asian immigrants, for example, many of whom are also in the country without legal documents and make up a considerable portion of undocumented immigrants living in the country).”

Sadly this is not just happening at one college in the Pacific Northwest as demands for “inclusive” wording, aka thought control, have been reported across the country from California to New Hampshire. Words such as American have even been deemed offensive.

Shockingly, (or perhaps not at this point) it isn’t just Marxist Professors who are attempting to control how their students speak, this push for full-scale cultural Marxist control is also coming from school administrators as a recent example out of Tennessee proves.

The Office of Diversity and Inclusion at the University of Tennessee at Knoxville recently published a guideline for students on how to be more inclusive (there’s that key word again) that also calls for students to cease using the completely normal pronouns he or she.

Commentary in the Daily Caller details how the guidelines, as well as similar ones throughout the country, have literally transferred 1984’s fantasy into reality.

As Fox News’s Todd Starnes reported, traditional pronouns like “he” and “she” will no longer cut it at UTK. Instead, collegians should use the “dozen” gender-neutral pronouns, according to the school’s Office of Diversity and Inclusion.

These alternatives include “ze,” “zhem” and “xyr.” Even though these words look more like the enunciations of a French movie villain, they’re now the recommended words for students wanting to be down with gender inclusion. Other ways to remain within the progressive tolerance sphere, according to the guide, is to ask every single person what name or pronoun they would like to be called before assigning them a harmful title.

“We should not assume someone’s gender by their appearance, nor by what is listed on a roster or in student information systems,” the UTK posting explained. “Transgender people and people who do not identify within the gender binary may use a different name than their legal name and pronouns of their gender identity, rather than the pronouns of the sex they were assigned at birth.”

We truly are living in a sort of Orwellian leftist nightmare when you have actual university’s demanding their students use words straight out of a science fiction movie such instead of he or she.

Demanding that students speak a certain way for fear of offending someone, especially a segment of the population that makes up .02 percent of the population, is straight up ludicrous and is part of a larger move to use societal pressure to censor beliefs and even words that the hard left has deemed offensive regardless whether or not they actually are.

It is also important to remember that Newspeak, as outlined by Orwell, was implemented as a form of thought control for the powers that be which effectively outlaws thinking that could threaten their power.

“The purpose of Newspeak was not only to provide a medium of expression for the world-view and mental habits proper to the devotees of IngSoc [the state ideology of Oceania], but to make all other modes of thought impossible.”