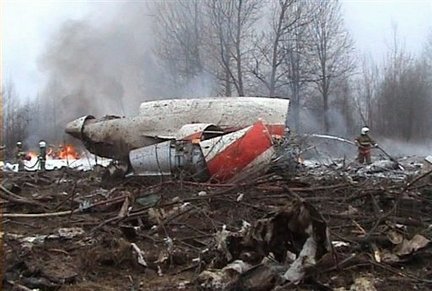 Polish authorities said Monday that someone stole a credit card from the wreckage of the plane crash that killed President Lech Kaczynski and 95 others in Russia, and the card was then used to withdraw cash.
Russian news services reported late Monday that three soldiers have been arrested on suspicion of having stolen personal belongings of a crash victim.

An unnamed source told the Itar-Tass news agency that the three conscripts were attached to the airport in the Russian city of Smolensk, where the plane was supposed to land. The source was quoted as saying investigators have evidence against the suspects.

Previously Russia’s Interior Ministry had denied the reports from Poland.

Monika Lewandowska, a spokeswoman for Warsaw prosecutors, said the equivalent of 6,000 Polish zlotys ($1,700) was withdrawn from the account of Andrzej Przewoznik, who died in the crash April 10 near Smolensk. Przewoznik was a prominent official who oversaw Poland’s wartime memorials.

Lewandowska told The Associated Press that two cards were stolen and that one was used just hours later, in the first of 11 withdrawals over three days from an automatic teller machine in Smolensk.

A second card belonging to Przewoznik was also stolen and there were six failed attempts to obtain money using that one, Lewandowska said.

Polish military prosecutors working on the main investigation into the crash discovered the cash withdrawals and have notified Russia, Lewandowska said.

Kaczynski’s plane crashed in heavy fog as it was carrying him and a high-ranking delegation to a memorial ceremony for 22,000 Polish prisoners of war massacred at the start of World War II by Josef Stalin’s secret forces.

Kaczynski, his wife and all 94 others on board - among them many of Poland’s top military leaders - were killed when the aircraft crashed in thick fog.

Investigators have not made final conclusions about the cause of the crash, but say that evidence so far points to pilot error and the heavy fog.