Robot to dig for secrets of Cheops 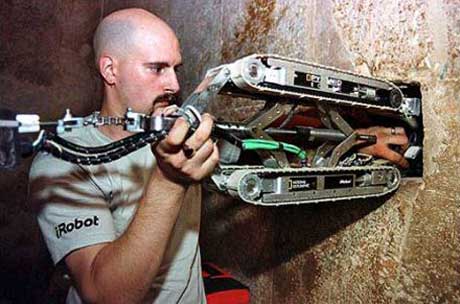 A robot archaeologist is to be sent deep inside Egypt's largest pyramid in a bid to solve secrets revealed by a first foray more than four years ago.

``The new robot will be sent down very narrow passages in the so-called Queen's Chamber, where the first robot was sent in 2002,'' said Zahi Hawass, who heads Egypt's Supreme Council of Antiquities.

Teams from Egypt and Singapore and a joint group from Britain and Hong Kong plan to insert the robot in February inside the Pyramid of Cheops at Giza, near to Cairo.

Eguipped with tiny cameras, the robot will be sent down the chamber's north and south passages in the hope of discovering what lies behind two inner walls or doors revealed during the first robotic expedition in September 2002.

At the time, the robot was sent into a northern shaft leading from the Queen's Chamber, only to be blocked about 65 metres from the chamber by ``a stone wall or door'' with copper handles. It also revealed the existence of a similar obstruction the same distance down the south passage.

The robot drilled a tiny hole through this blockage that was large enough to insert a micro camera which showed a cavity filled with stones itself closed on the far side by another wall or door. Archaeologists have always hoped to find clues that might lead them to discover the tomb of Cheops himself.

The pharaoh reigned more than 2,500 years before Christ, and it was he who had the largest pyramid in Egypt built.

Meanwhile, the French government said on Thursday that the judiciary was working to shed light on the attempted sale by a Frenchman of hair believed to belong to the mummy of Ramses II.

Asked whether France would apologise to Egypt if the hair turned out to be genuine as demanded by Hawass the foreign ministry said it was ``up to the judiciary to decide what action to take''.

``Like the Egyptian authorities, we want full light to be shed on this case,'' spokesman Jean-Baptiste Mattei told reporters.

A 50-year-old Frenchman was questioned by police on Wednesday over an Internet ad offering to sell snips of hair, embalming resin and bandages allegedly taken from the mummy of Ramses II.

He claimed the lot belonged to his father who was part of a team of scientists who analysed the royal mummy when it was sent to France in 1976 for electromagnetic treatment to stop it from deteriorating condition.

The ad which had been taken offline by Thursday kicked up a storm among Egyptian officials and researchers who consider the hair, if authentic, to be part of Egypt's rich heritage.

Mattei repeated he was sure Franco-Egyptian relations would not suffer from ``these individual actions, which are being investigated and which have been condemned by France's entire scientific community''.

The seller, who was released without charge while the investigation continues, later apologised to the Egyptian authorities, saying he ``had never imagined it would cause a diplomatic incident''.

The controversy comes a week ahead of a visit to Paris by Egypt's President Hosni Mubarak, who is to inaugurate an exhibition of Egyptian treasures discovered by a team of French underwater explorers.

The mummified body of Ramses II, who reigned from 1279 to 1213 BC, was sent from Cairo to Paris to be treated against decay in 1976, the first and last time a mummy of similar importance had left Egyptian soil.

A French lab said Thursday that it and other labs were indeed sent samples of the mummy's hair, resin and bandaging for analysis at the time, but that all were from fragments that fell from its shroud in transport.

Earlier, Egypt warned France that anything short of full cooperation in the case could harm bilateral ties.

Hawass, who has championed the recovery of pharaonic artefacts from western countries, was furious and said he could demand a formal apology.

``I have never seen such a thing in my entire life and if this proves true, I will demand an apology from France,'' he said.

``We want full transparency. If these elements are authentic, it would be a scandal that would ri