First video of Russian airstrikes on ISIS in Syria

Russia's Ministry of Defense has released a video showing a military jet striking Islamic State (IS, formerly ISIS/ISIL) targets in Syria. Moscow says that at least eight targets were hit Wednesday, with a coordination center in the mountains having been totally destroyed. 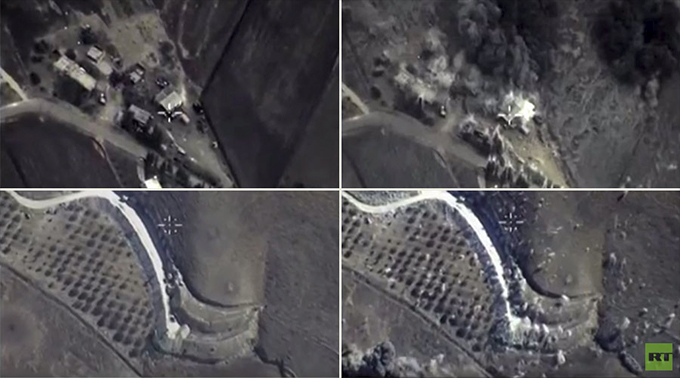 A total of 20 combat flights were carried out by Russian forces on Wednesday, the same day that the country's upper chamber of parliament approved the deployment of troops to Syria at the request of Russian President Vladimir Putin.

The ministry stressed that civilian objects were avoided in the operation.

Editor's comment: If Russia can do this, why couldn't USA do it months ago, YEARS AGO? So that we wouldn't have this flooding of migrants into Europe? The pundits on the "progressive" network MSNBC were just talking about what a danger Putin is, simply because he's fighting withAssad against IS?! So it's clear then that the USA is standing on IS side? This isn't just Putin's CRAZY conspiracy theory?

This needs to end and if Russia can put a stop to it, then let's do it! So butter up the GMO popcorn and follow RT's live updates on Syria Anti-Terror OP