The Satanic Temple, a religious group, has offered to donate a 7 foot statue to be placed in the Oklahoma Statehouse. They released their designs for the monument this week.

As a religious monument, it’s not the biggest, the most incredible, or even the most controversial, but as a tourist attraction it’s probably the most ingenious. If built, who won’t be talking about it, photographing it, or visiting it (and attempting to vandalize it)?

Apparently the dark mystery of Baphomet still draws the curious.

[Baphomet: The Mystery of Mysteries Unveiled]

In past, such symbolism was often hidden in architecture or within secret societies, disguised yet on display to both the knowledgeable and the uninitiated. It’s not common even today to see blatant monuments to religious organizations, outside of Christianity, Islam and Judaism, presented and accepted in the western public square.

As secular groups such as Atheists gain ground in erecting their own monuments, Satanists are able to promote the expression of their ideology as based on liberty and the "values of religious freedom and free expression".

Despite criticism from other religious groups, there are signs that Satanistic beliefs have become more socially tolerated. Satanism is now allowed in the Royal Navy of the British Armed Forces, despite opposition from Christians, and in 2005, the Supreme Court of the United States debated over protecting the religious rights of prison inmates after a lawsuit challenging the issue was filed to them.

Contemporary Satanism is mainly an American phenomenon, the ideas spreading with the effects of globalization and the Internet. The Internet promotes awareness of other Satanists, and is also the main battleground for the definitions of Satanism today. Satanism started to reach Eastern Europe in the 1990s, in time with the fall of the Soviet Union, and most noticeably in Poland and Lithuania, predominantly Roman Catholic countries.

Satanism developed in the context of the Christian faith, as an ideological backlash to certain tenets promoted in Christianity. The character of Satan revered by Satanists, therefore, is mainly regarded as the prototypical anti-Christian figure.

Tune into Red Ice Radio to hear guest Winter Laake explain Satanism, how it is defined, and what it means to be a Satanist. Judy Byington works as a consultant on satanic crime with the Utah Attorney General’s office, and discusses ceremonies and ritual abuse survivors. Lynn Picknett speaks about the murky areas between good and evil and the symbiotic relationship between Christianity and Satanism, and Leo Rutherford examines how the whole of religion is the greatest fraud ever sold.

The Satanic Temple, a religious group based in New York City, on Monday unveiled their design for a monument they hope to erect at the Oklahoma Statehouse. 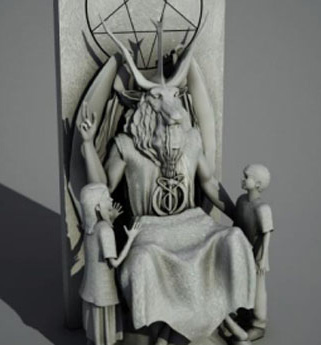 The 7-foot-tall monument would include a goat-headed Baphomet figure sitting cross-legged on a stone slab, flanked by two smiling children. The monument would also include quotes from poets Lord Byron and William Blake.

“The monument has been designed to reflect the views of Satanists in Oklahoma City and beyond. The statue will serve as a beacon calling for compassion and empathy among all living creatures. The statue will also have a functional purpose as a chair where people of all ages may sit on the lap of Satan for inspiration and contemplation,” spokesman Lucien Greaves explained.

The group offered to donate a monument last month, after State Rep. Mike Ritze (R-Broken Arrow) and conservative Christians were allowed to erect a Ten Commandments monument on the statehouse grounds.

Lawmakers in Oklahoma, however, have insisted that the Satanists should not be given the same treatment as Christians.

“This is a faith-based nation and a faith-based state,” Rep. Earl Sears (R-Bartlesville) said. “I think it is very offensive they would contemplate or even have this kind of conversation.”

After other groups — including PETA and the Church of the Flying Spaghetti Monster — asked for their own displays, the Oklahoma City Capitol Preservation Commission placed a moratorium on new monuments at the statehouse.

But the Satanic Temple insists erecting a monument of their own is within their constitutional rights.

“Our monument celebrates an unwavering respect for the Constitutional values of religious freedom and free expression,” Greaves explained. “Satanism is a fundamental component at the genesis of American liberty. Medieval witch-hunts taught us to adopt presumption of innocence, secular law, and a more substantive burden of proof.

“Today, we are rightly offended by the notion of blasphemy laws and divine fiats. Acknowledging wrongful persecutions has helped shape the legal system that preserves the sovereignty of our skeptics, heretics, and the misunderstood. It has shaped a proud culture of tolerance and free inquiry. This is to be a historical marker commemorating the scapegoats, the marginalized, the demonized minority, and the unjustly outcast.”

Read the full article at: rawstory.com

The back of the stone slab will display a passage from Lord Byron’s dramatic work, Cain, that reads:

Then who was the Demon? He

Who would not let ye live, or he who would

Have made ye live forever, in the joy

And power of Knowledge?