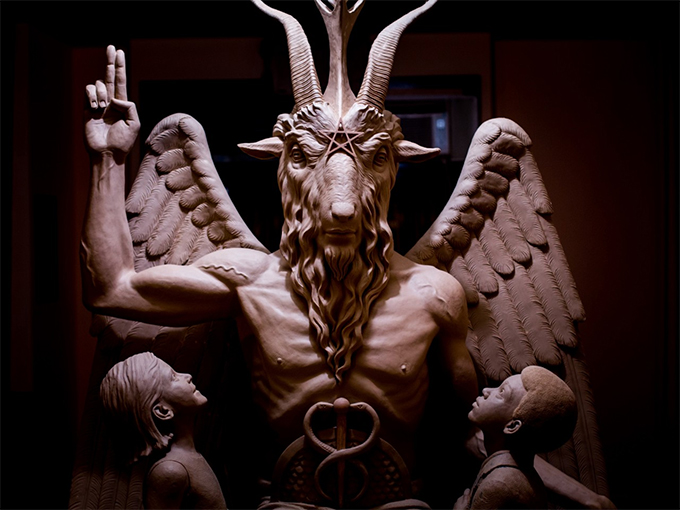 Several hundred people have attended a Mass at a US Catholic church to protest against an eight and a half-foot (2.6-metre)-tall bronze statue of Satan that hundreds of people also lined up to see.

The Satanic Temple had said it would unveil the statue on Saturday at a Detroit location that only people with tickets would know about. Hundreds lined up on Saturday evening to get the tickets as Christian protesters rallied nearby.

The bronze Baphomet statue, featuring a human body, goat’s head and wings, was unveiled just before midnight to cheers of "Hail Satan". Statues of a boy and a girl in poses of adoration stand on either side.

The Unveiling Of Baphomet https://t.co/EcKsZ70xtl

Earlier on Saturday, The Detroit News said 200-250 people attended Mass at St. Joseph Church in a protest against the Satanic event.

The statue had been planned for the state Capitol in Oklahoma City until Oklahoma's Supreme Court banned all religious displays on Capitol grounds.

The Satanic Temple now says it wants to erect it outside Arkansas' statehouse, where a Ten Commandments monument also is planned.

Satanic statue to be revealed in Detroit on Saturday
From: detroitnews.com

The Satanic Temple is set to unveil its controversial goat-headed Baphomet sculpture at an undisclosed location in Detroit on Saturday night.

The event, open to prepaid ticket holders only, is advertised as the largest public satanic ceremony in history.

According to the Satanic Temple, the 1-ton, nearly 9-foot-tall bronze idol will be unveiled only in Detroit. Ultimately, the group hopes to have it placed permanently next to a sculpture of the Ten Commandments monument now in place near a state courthouse in Oklahoma City, Oklahoma, or outside Arkansas’ Statehouse in Little Rock, where a Ten Commandments monument also is planned.<

The Oklahoma City monument to the Ten Commandments has been the site of a political/social battle for the past several months. Opponents of the monument want it removed on the grounds of separation of church and state, while backers view it as the backbone of American Judeo-Christian values.

The Oklahoma Supreme Court recently ruled that the Ten Commandments monument was illegal — a decision that the governor of Oklahoma is fighting.

The Satanic Temple’s co-founder, Lucien Greaves, has said the Baphomet statue will not remain in Detroit.

Detroit, however, was selected for the unveiling because the Satanic Temple in the city has a “strong congregation,” Greaves said. “We just have a good community over there.”

The Baphomet statue, which was designed and built at a cost of more than $100,000, was to have been unveiled at Bert’s Market Place in Detroit’s Eastern Market district, but Bert Dearing said he gave the group back its $3,000 rental fee when he learned who booked the place.

The unveiling of the sculpture has been a concern for Catholic parishes, said Joe Kohn, spokesman for the Archdiocese of Detroit.

“There are certainly concerned Catholics and concerned Christians in the city,” Kohn said. “The Archdiocese is not organizing anything, but we understand if our parishes are concerned to do so.”

The founder of the Satanic Temple Detroit chapter, Jex Blackmore, has said the group doesn’t worship Satan but does promote individuality, compassion and views that differ from Christian and conservative beliefs.

The Satanic Temple states that its mission is to “encourage benevolence and empathy among all people, reject tyrannical authority, advocate practical common sense and justice, and be directed by the human conscience to undertake noble pursuits guided by the individual will.”

The Satanic Temple describes itself as a civic minded organization that has been involved in a number of good works, including taking a stand against the extreme actions of the Westboro Baptist Church.

On its website, organizers are promising a “hedonistic celebration” and a “night of chaos, noise and debauchery” at the Detroit unveiling.

It is also encouraging invitees to “dance with the devil” through the soulful musical offerings of the “mutant ensemble” known as Wolf Eyes and dark performances by the Boston-based industrial doom punk band Sadist (fresh off a recent performance with Screaming Vomit).

Tickets are $25 for general admission and $75 for VIP admission, which allows VIPs to be photographed seated at the Baphomet monument. According to organizers, ticket holders must arrive between 8 and 9 p.m. with no one being admitted after 9 p.m.

Tickets can be purchased online at http://thesatanictemple.ticketleap.com.