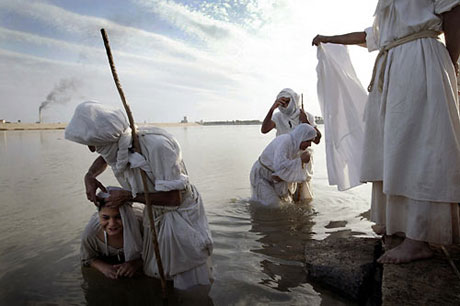 Mandeans are a small pre-Christian sect that view the John the Baptist as their savior. The religion combines some aspects of Christianity, Judaism, Islam and Gnosticism. There are an estimated 100,000 Mandeans worldwide, mainly in Iraq and Iran. Baptism is the most important rite. The central rite of the Mandean cult is immersion in water, which is regarded as a symbol of life. The greater the number of ablutions performed the better. Mandeans must face the North Star during prayers. Mandeans are only allowed to marry other Mandeans in order to preserve pure bloodlines. Image source
The United States didn’t set out to eradicate the Mandeans, one of the oldest, smallest and least understood of the many minorities in Iraq. This extinction in the making has simply been another unfortunate and entirely unintended consequence of our invasion of Iraq — though that will be of little comfort to the Mandeans, whose 2,000-year-old culture is in grave danger of disappearing from the face of the earth.

The Mandeans are the only surviving Gnostics from antiquity, cousins of the people who produced the Nag Hammadi writings like the Gospel of Thomas, a work that sheds invaluable light on the many ways in which Jesus was perceived in the early Christian period. The Mandeans have their own language (Mandaic, a form of Aramaic close to the dialect of the Babylonian Talmud), an impressive body of literature, and a treasury of cultural and religious traditions amassed over two millennia of living in the southern marshes of present-day Iraq and Iran.

Practitioners of a religion at least as old as Christianity, the Mandeans have witnessed the rise of Islam; the Mongol invasion; the arrival of Europeans, who mistakenly identified them as “Christians of St. John,” because of their veneration of John the Baptist; and, most recently, the oppressive regime of Saddam Hussein, who drained the marshes after the first gulf war, an ecological catastrophe equivalent to destroying the Everglades. They have withstood everything — until now.

Like their ancestors, contemporary Mandeans were able to survive as a community because of the delicate balance achieved among Iraq’s many peoples over centuries of cohabitation. But our reckless prosecution of the war destroyed this balance, and the Mandeans, whose pacifist religion prohibits them from carrying weapons even for self-defense, found themselves victims of kidnappings, extortion, rapes, beatings, murders and forced conversions carried out by radical Islamic groups and common criminals.

When American forces invaded in 2003, there were probably 60,000 Mandeans in Iraq; today, fewer than 5,000 remain. Like millions of other Iraqis, those who managed to escape have become refugees, primarily in Syria and Jordan, with smaller numbers in Australia, Indonesia, Sweden and Yemen.

Unlike Christian and Muslim refugees, the Mandeans do not belong to a larger religious community that can provide them with protection and aid. Fundamentally alone in the world, the Mandeans are even more vulnerable and fewer than the Yazidis, another Iraqi minority that has suffered tremendously, since the latter have their own villages in the generally safer north, while the Mandeans are scattered in pockets around the south. They are the only minority group in Iraq without a safe enclave.

When Mandeans do seek refuge in the Kurdish-dominated north, they report that they are typically viewed as southern, Arabic-speaking interlopers, or, if their Mandean identity is discovered, persecuted as religious infidels. In Syria and Jordan, Mandeans feel unable to practice their religion openly and, after years of severe deprivation, some have begun to convert simply in order to receive aid from Muslim and Christian relief agencies.

Mandean activists have told me that the best hope for their ancient culture to survive is if a critical mass of Mandeans is allowed to settle in the United States, where they could rebuild their community and practice their traditions without fear of persecution. If this does not happen, individual Mandeans may survive for another generation, isolated in countries around the world, but the community and its culture may disappear forever.

Of the mere 500 Iraqi refugees who were allowed into the United States from April 2003 to April 2007, only a few were Mandeans. And despite the Bush administration’s commitment to let in 7,000 refugees in the fiscal year that ended last month, fewer than 2,000, including just three Iraqi Mandean families, entered the country.

In September, the Senate took a step in the right direction when it unanimously passed an amendment to a defense bill that grants privileged refugee status to members of a religious or minority community who are identified by the State Department as a persecuted group and have close relatives in the United States. But because so few Mandeans live here, this will do little for those seeking asylum. The legislation, however, also authorizes the State and Homeland Security Departments to grant privileged status to “other persecuted groups,” as they see fit.

If all Iraqi Mandeans are granted privileged status and allowed to enter the United States in significant numbers, it may just be enough to save them and their ancient culture from destruction. If not, after 2,000 years of history, of persecution and tenacious survival, the last Gnostics will finally disappear, victims of an extinction inadvertently set into motion by our nation’s negligence in Iraq.

Nathaniel Deutsch is a professor of religion at Swarthmore College.