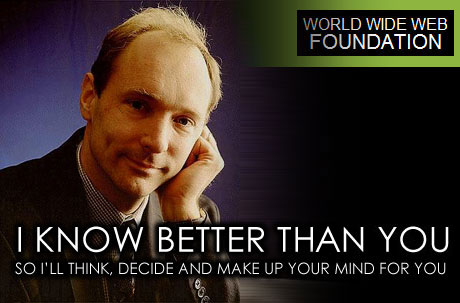 Check the article from BBC below.

"Sir" Tim Berners-Lee, the "creator" of the World Wide Web (together with Al gore of course) is trying to wreck the World Wide Web and destroy everything the web has come to represents: a way of spreading ideas, "new" ideas, diversity, a free flow of opinions, thoughts (Freedom of speech), alternative sources that differs from the “memestream” and a myriad of possibilities that you can explore and investigate for yourself without anyone telling you what to think or what is “correct”.

The “World Wide Web Foundation” is yet another attempt by the nervous thought police to censor information before you've even had a chance to use your own judgment and discernment.

They know what information is "correct" ...so why let people explore other possibilities or alternatives, right? It's just a waste of time and energy!

It shows how afraid “authority” figures are of ideas, information, freedom of opinion and freedom of thought!

It's nothing less than the tippy toe steps towards a “New World Order Hive Mind”.

"The Future is One world, One Thought ... One Mind, Behold!" (This Clip is from Lawnmower Man 2)


The following article is from the: BBC:

Warning sounded on web's future
The internet needs a way to help people separate rumour from real science, says the creator of the World Wide Web.

Talking to BBC News Sir Tim Berners-Lee said he was increasingly worried about the way the web has been used to spread disinformation.

Sir Tim spoke prior to the unveiling of a Foundation he has co-created that aims to make the web truly worldwide.

It will also look at ways to help people decide if sites are trustworthy and reliable sources of information.

Future proof
Sir Tim talked to the BBC in the week in which Cern, where he did his pioneering work on the web, turned on the Large Hadron Collider for the first time.

The use of the web to spread fears that flicking the switch on the LHC could create a Black Hole that could swallow up the Earth particularly concerned him, he said. In a similar vein was the spread of rumours that the MMR vaccine given to children in Britain was harmful.

Sir Tim told BBC News that there needed to be new systems that would give websites a label for trustworthiness once they had been proved reliable sources.

"On the web the thinking of cults can spread very rapidly and suddenly a cult which was 12 people who had some deep personal issues suddenly find a formula which is very believable," he said. "A sort of conspiracy theory of sorts and which you can imagine spreading to thousands of people and being deeply damaging."

Sir Tim and colleagues at the World Wide Web consortium had looked at simple ways of branding websites - but concluded that a whole variety of different mechanisms was needed.

"I'm not a fan of giving a website a simple number like an IQ rating because like people they can vary in all kinds of different ways," he said. "So I'd be interested in different organisations labelling websites in different ways".

Sir Tim spoke to the BBC to publicise the launch of his World Wide Web Foundation which aims to improve the web's accessibility.

Alongside this role it will aim to make it easier for people to get online. Currently only 20% of the world's population have access to the web

"Has it been designed by the West for the West?" asked Sir Tim.

"Has it been designed for the executive and the teenager in the modern city with a smart phone in their pocket? If you are in a rural community do you need a different kind of web with different kinds of facilities?"

The Web Foundation will also explore ways to make the web more mobile-phone friendly. That would increase its use in Africa and other poor parts of the world where there are few computers but plenty of handsets.

The Foundation will also look at how the benefits of the web can be taken to those who cannot read or write.

"We're talking about the evolution of the web," he said. "Perhaps by using gestures or pointing. When something is such a creative medium as the web, the limits to it are our imagination".

The Foundation will also look at concerns that the web has become less democratic, and its use influenced too much by large corporations and vested interests.

"I think that question is very important and may be settled in the next few years," said Sir Tim.

"One of the things I always remain concerned about is that that medium remains neutral," he said.