Dec 24, 2012 Source: dailymail.co.uk
Medical sensors concealed within temporary tattoos could be used by coaches to fine-tune their athletes’ training, a new study claims.

Researchers at University of California San Diego invented the sensor, which comes in a thin flexible transfer adorned with a cheerful smiley-face design.

’We wanted a design that could conceal the electrodes,’ says Vinci Hung, a PhD candidate in the University of Toronto Scarborough’s Department of Physical & Environmental Sciences, who worked as part of the team during a foreign exchange trip earlier this year.

The temporary tattoo hides medical sensors that can can detect changes in the skin’s pH levels caused by metabolic stress, which could be used by sports coaches and medical researchers 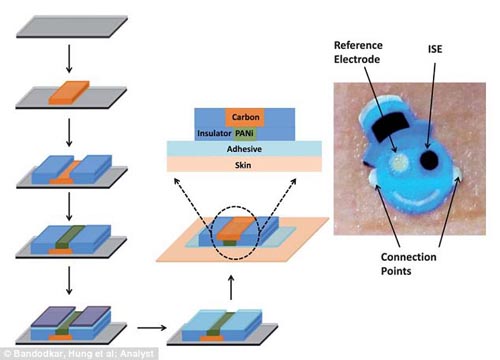 This graphic illustrates the screen-printing process used to create the transfer sensors on commercially available transfer tattoo paper
’We also wanted to showcase the variety of designs that can be accomplished with this fabrication technique.’

That’s the same kind of paper that usually bears pictures of Spiderman or Disney princesses for youngsters to stick on to their arms.

In the case of the smiley face sensor, the ’eyes’ function as the working and reference electrodes, and the ’ears’ are contacts to which a measurement device can connect.

These sensors can detect changes in the skin’s pH levels in response to metabolic stress from exertion.

They can give clues to underlying metabolic diseases such as Addison’s disease, or simply signal whether an athlete Is tired or dehydrated during training.

The devices are also useful in the cosmetics industry for monitoring skin secretions. However existing devices can be bulky, or hard to keep stuck to sweaty skin.

The new tattoo-based sensor stayed in place during tests, and continued to work even when the people wearing them were exercising and dripping with sweat.

They were applied in a similar way to regular transfer tattoos, right down to using a paper towel soaked in warm water to remove the base paper.

To make the sensors, Ms Hung and her colleagues used a screen printer to lay down layers of silver, carbon fibre-modified carbon and insulator inks, followed by electropolymerization of aniline to complete the sensing surface.

By using different sensing materials, the tattoos can also be modified to detect other components of sweat, such as sodium, potassium or magnesium, all of which are of potential interest to researchers in medicine and cosmetology.

Sano Intelligence is in the testing phase of a smart tattoo that reads a wearer’s blood markers. The application would be particularly useful for diabetics, who need to keep strict control over their blood sugar levels and often have to resort to finger-prick tests to determine if those levels are within normal range. The Sano patch would not only allow them to forgo the pain of finger-pricks, but the constant hassle of dragging around testing devices and interrupting daily activities to draw their own blood.

And Boston-based MC10 announced earlier this year that it would soon release its own “stretchable electronics” patch, that can be applied internally to human organs, or externally to human skin, or clothing, depending on what needed to be monitored. The stick-on’s ability to remain flexible while reading vital signs means that it could effectively gauge the function of specific organs, track brain processes, and monitor more mainstream functions like heart rate, blood oxidation and body hydration.

RIC Ed Note: One can see the underlying benefits to treatment in this technology, but ’track brain processes’? ProTip - Don’t think seditious or unflattering thoughts about your government in the wrong company! Or better yet, don’t get a tattoo that tracks your every move or thought. Good grief.