The Occult Nature of the Olympics Closing Ceremony

Aug 13, 2012 Source: ishtarsgate.com
"Occult" just means "hidden" and so in itself, it is a neutral word. It is neither good nor evil. The outcome of any occult act lies in the intention of the performer of it. But as many are increasingly becoming aware, there has been a silent and subterranean occult war going on for some time across the world between various Freemasonic groups.

While we’re watching surface events, others are working the geometries, archetypes, leyline energies and numbers underneath that which appears to be happening on the surface, and these underground factors engage a part of our brain of which we’re largely unconscious, which is why it’s called the unconscious mind.

It’s my belief that the main aim of all the psy-ops campaigns in recent months, about false flag attacks and possible ET invasions or Disclosure at the Olympics, has been to get us all to watch. They can’t programme our unconscious minds if we don’t watch what they put on our screens. So they needed us to be present and engaged ~ and I would say they’ve succeeded massively in drawing most of us in to be a part of their occult offering to the gods.

Why do I believe that the London Olympic Games 2012 was an occult ritualistic ceremony to the gods? Well, partly because it always was.

As Mike Williams wrote in his article How the Olympic Games Began as a Religious Ceremony, when the Olympics began, back in history, it was nothing to do with sport. The original Olympics were purely a ceremonial ritual dedicated to the gods of Olympus, and that hasn’t changed.

The sporting bit of the Olympics was adopted much later on, and even today, it’s only an excuse, to add to the enchantment of the masses. The Games themselves are just a veneer to hide the real Zionist Game and that is to perform a magical ritual which is carried out by the use of certain symbols, numbers and geometrical shapes and various other forms of alchemy which programs the unconscious minds of those watching and engaging.

There was a lot of occult, alchemical symbology on display in the opening ceremony, and there are articles covering that in the Further Reading section below. But the main implant took place when the five rings became enflamed. This was to represent the spinning flaming wheels of the Old Testament prophet Elijah’s chariot as he ascended to Heaven. 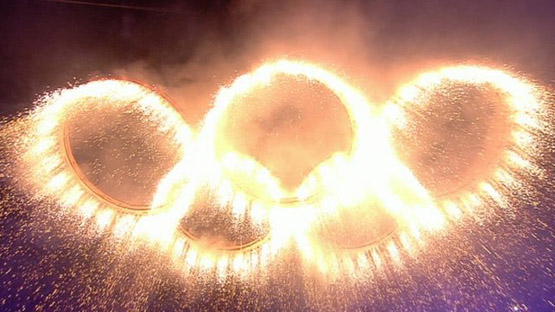 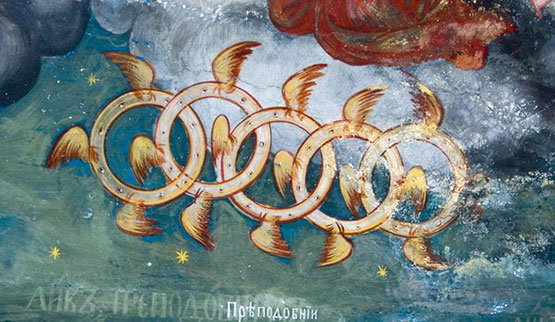 As the Game was broadcast all over the world, the programming continued with the original implant of the opening ceremony being constantly reinforced by the regular flashing up on our screens of the five rings, and Vangelis’s Chariots of Fire playing in the background.

The athletes are awarded miniature versions of these wheels in the form of medals, the unconscious implication being that winning the Olympics will get than an audience with the gods of Olympus, just like Elijah.

But then like all occult ceremonies which have to be closed down when the aim has been achieved, we had last night’s closing ritual.

The day before, organiser Kim Gavin had said:

"If the opening ceremony was the wedding, tonight will be the ’disco after the marriage.’"

Whether Gavin realised it or not, this was an allusion to the Divine Marriage, or Alchemical Marriage, a rite once practised by Rosicrucians and nowadays by Freemasons, and based on the text The Chymical Wedding of Christian Rosenkreutz.

The Divine Wedding is a metaphor for the most important stage in an alchemical process, known as a conjunction, which is a conjoining (or joining) of two substances to form a new substance with its own characteristics. This new substance is known as the Child of the Conjunction, or the Philosopher’s Stone. The Philosopher’s Stone is said to turn base metal into gold, and to offer the boon of immortality.

And so now that the aim of the creating the Philosopher’s Stone had been achieved, the ceremony needed to be closed down with thanks, gratitude and celebration.

The Alchemy of the Closing Ceremony

It was an amazing show ~ as you would expect from something designed to fully engage the audience ~ and there were some brilliant performances (my favourites were Russell Brand as The Egg Man and Annie Lennox ). It was wonderful to see people having such a great time, especially the athletes and volunteers who deserved a great party after all their hard work.

However, underlying the show and the party, and unbeknown to most of those taking part, it was a Freemasonic closing ritual.

At the beginning, the struts of the London Eye which provided the backdrop for most of the activities of the first hour were set in the position of the saltire cross of the Scottish Rite of Freemasons. I’ve written extensively elsewhere about the deeper meaning and history of the saltire cross, but in a nutshell for now, it is about death and resurrection.

One of the highights featured a stepped pyramid created out of 303 white boxes to Kate Bush’s Running Up That Hill, and when the song got to, "If I could make a deal with God" all the dancers were in full prostration on the floor.

In numerology, the O counts for zero, so in other words, the white boxes making up the pyramid represented the number 33, the most significant number for any Freemasonic ritual and the highest order that can be achieved.

The main numbers being used in the closing ceremony were 4, 7 and 27 ~ again all highly significant Freemason numbers (for instance, 40 members of Stomp, 400 lbs gold went into making all the gold medals, 270 singing schoolchidren, 70,000 volunteers etc.)

The classic masonic black-and-white chequered floor was flashed up, dozens of times, on the screen behind one of the performing bands, as a background to an Olympic medal in the foreground.

And then, at the end, the ultimate Freemasonic symbol of all, the phoenix rising from the ashes, to the sung words of "...we can rule the world" by Take That and the backdrop turning into the image of the famous masonic compasses and ruler. 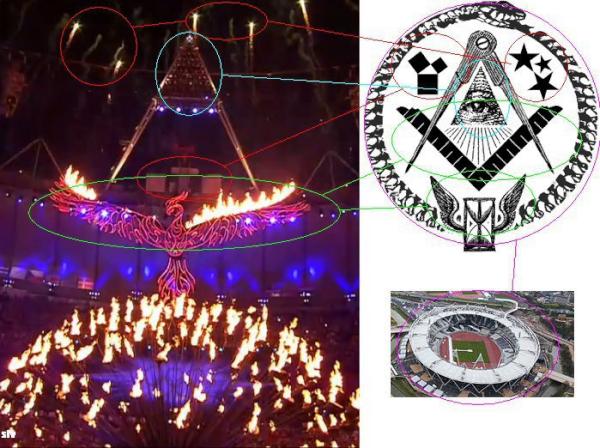 (Thanks to Jeffrey Borresson for the above photo)

In any occult closing ritual, the last action performed is the dowsing of the flame of the candle. In this case, it was the putting out of the torch or cauldron.

This article is being discussed here on Ishtar Babilu Dingir’s forum, Ishtar’s Gate.

The Alchemical Secrets of Glastonbury Tor

The Sacred Geometry of the Olympic Games

The Enchantment of the Olympics

How the Olympic Games Began as a Religious Ceremony