"The Rig's on Fire! I Told You This Was Gonna Happen!" 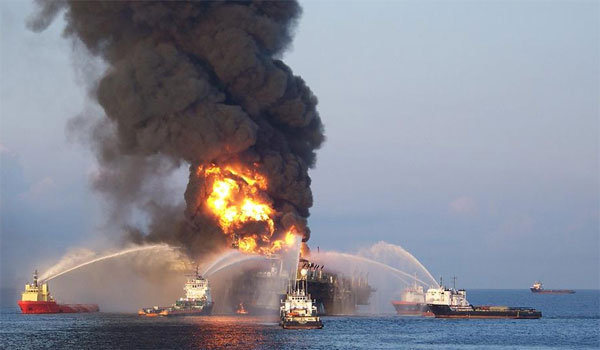 A prominent Houston attorney with a long record of winning settlements from oil companies says he has new evidence suggesting that the Deepwater Horizon's top managers knew of problems with the rig before it exploded last month, causing the worst oil spill in US history. Tony Buzbee, a lawyer representing 15 rig workers and dozens of shrimpers, seafood restaurants, and dock workers, says he has obtained a three-page signed statement from a crew member on the boat that rescued the burning rig's workers. The sailor, who Buzbee refuses to name for fear of costing him his job, was on the ship's bridge when Deepwater Horizon installation manager Jimmy Harrell, a top employee of rig owner Transocean, was speaking with someone in Houston via satellite phone. Buzbee told Mother Jones that, according to this witness account, Harrell was screaming, "Are you fucking happy? Are you fucking happy? The rig's on fire! I told you this was gonna happen."

Whoever was on the other end of the line was apparently trying to calm Harrell down. "I am fucking calm," he went on, according to Buzbee. "You realize the rig is burning?"

At that point, the boat's captain asked Harrell to leave the bridge. It wasn't clear whether Harrell had been talking to Transocean, BP, or someone else.

On Friday a spokesman for Transocean said he couldn't confirm or deny whether the conversation took place. He was unable to make Harrell available for an interview. 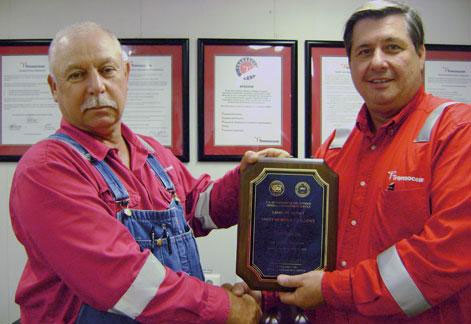 During hearings held late last month by the Coast Guard and the Minerals Management Service, Harrell denied any conflicts with his BP or Transocean bosses. He said that he did not feel pressured to rush the completion of the well, even though the rig had fallen behind schedule.

Yet Buzbee's claims add weight to other statements that contradict Harrell's version of events. Testifying before the Coast Guard and MMS panel last month, Douglas Brown, the chief mechanic on the Deepwater Horizon, said that on the morning of the day that the rig exploded Harrell had a "skirmish" over drilling procedures during a meeting with BP's "company man," well site leader Robert Kaluza. "I remember the company man saying this is how it's going to be," Brown told the panel. As Harrell was leaving the meeting, according to Brown, "He pretty much grumbled, 'I guess that's what we have those pincers for,'" referring to the blowout preventer on the sea floor that is supposed to be the last resort to prevent a leak in the event of an emergency. The blowout preventer failed following the explosion on the rig, causing the massive spill. (Transocean's chief electronics technician, Mike Williams, also recalled the argument but named a different BP "company man," BP's top official on the rig, Donald Vidrine).

In a statement to the Wall Street Journal, Transocean appeared to back the claims that Harrell had feuded with BP: "The testimony certainly seems to suggest that [Harrell] disagreed with the operator's instructions, but what those were and why he disagreed are matters that will ultimately be determined during the course of investigations."

Other rig workers have also claimed that they were pressured by BP and their supervisors to cut corners. Transocean roustabout Truitt Crawford told the Coast Guard that he overheard senior management saying that BP was "taking shortcuts" by replacing drilling mud in the well with saltwater, which would have provided less weight to contain the well's surging pressure. Transocean's Williams told 60 Minutes that a supervisor had dismissed evidence that the well's blowout preventer had been damaged. And workers with Halliburton, the well's cementing contractor, had complained that BP's use of cement "was against our best practices" and told the oil company that it would likely have "a SEVERE gas flow problem" unless the well's casings were centered more carefully.

Buzbee told Mother Jones that the sailor's version of Harrell's phone conversation following the explosion was corroborated by a statement from a second crew member who says he also overheard the call. Both statements were taken in-person by Buzbee's investigator and safety consultant, who has interviewed some 60 people involved in the disaster, and signed by the witnesses, he said. Buzbee declined to make the full statements available to Mother Jones because, he said, "it is work product, meaning that it is something that I do not have to produce or disclose in litigation but that can be used at the right time in the litigation." He added that he intends to take a deposition from the crew members at a later time.

Buzbee's case against the operators of the Deepwater Horizon is hardly his first foray into suing major oil companies. After a BP refinery in Texas City exploded in 2005, killing 15 workers and injuring dozens more, he won $100 million in punitive damages from the company. In the wake of the 2002 shipwreck of the Prestige oil tanker, which devastated the coast of Galicia, he won a $70 million settlement from Spain's government on behalf of the country's Basque region.* And he's also nabbed $15 million from Transocean and $6.2 million from Halliburton for injured offshore oil workers.

Yet Buzbee is convinced that the Gulf oil spill lawsuit will be his biggest ever. "It's the grandaddy of all cases," he said. "This is going to define BP and whether BP survives. This is going to be the biggest case in the history of the United States, no doubt about it."

*Correction: An earlier version of this story incorrectly stated that Buzbee won a $70 million settlement from the American Bureau of Shipping for its role in the Prestige oil spill off the coast of Spain. The settlement came from Spain's government.