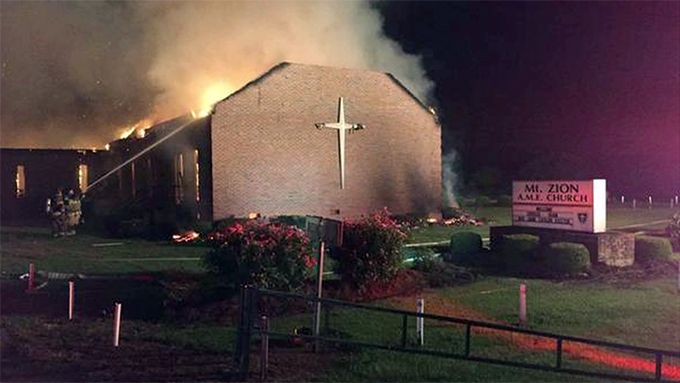 The Rev. John Taylor feared the worst when he learned his church was on fire, only days after a mass shooting at a black church in Charleston prompted Southern leaders to call for removing Confederate flags.

The Mount Zion African Methodist Episcopal Church was burned to the ground by the Ku Klux Klan in 1995.

Preliminary indications suggest the Mount Zion fire was not the result of arson, according to a federal official who spoke with The Associated Press Wednesday on condition of anonymity, for lack of authority to discuss the case publicly.

More than a half-dozen fires at black churches have burned in the days since a white gunman was charged with murder in the shootings of nine black churchgoers in Charleston. Investigators have determined that several were intentionally set, but have yet to announce any evidence of racial motives.

According to the best available national statistics, if these have been the only church fires happening recently, this would be a relatively safe time.

An average of 31 houses of worship burned every week from 2007 through 2011, according to a 2013 estimate by the National Fire Protection Association, which analyzed government data and survey results.

Among these, arson was relatively rare: Just 16 percent of the estimated blazes at religious structures were intentionally set during the five-year period ending in 2011. That means arsonists set fire to roughly five each week. The figures include a small number of funeral homes and do not distinguish between predominantly white and black congregations.

“I can tell you we’re not going to leave any stone unturned,” announced Craig Chillcott, assistant special agent in charge of the Bureau of Alcohol, Tobacco, Firearms and Explosives office that oversees North and South Carolina.

No one keeps an up-to-date tally of every church fire in the United States, making exact comparisons impossible. But 84 percent of these fires happen for reasons other than arson. Kitchen equipment and faulty heating and electrical systems are the most likely causes.

It may simply be that people are paying more attention to church fires now, given this month’s tumultuous events, suggested NFPA analyst Marty Ahrens.

“Perception matters,” Ahrens said. “We don’t know all the causes of all the fires that have gone on this week. But if the church arsons had not happened so soon after the tragedy in Charleston, that horrible incident, would it have gotten the same level of attention?”

Amren Editors note: Federal investigators have found no signs of arson and suspect that lightening may have caused the fire.