Don't forget that Chertoff is an Is an Israeli citizen. Sure, project paperclip brought over Nazi's to the United States as the above video points out but in this case I'm afraid Nazi's aren't the ones to worry about ... it's Zionists behaving as Nazi's.

The TSA is out of control

The Fraud of the Naked Body Scanners 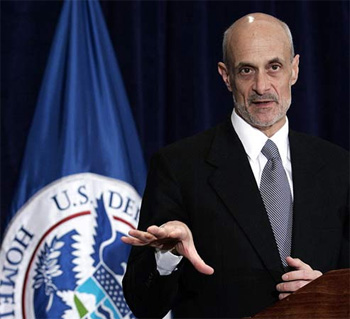 The swirling controversy about the grotesque invasion of privacy for the nation's airline passengers deserves a more thorough analysis. Let's begin with the one statement that answers all earthly questions: Follow the Money.

The Naked Body Scanners are manufactured by the Rapiscan Systems, which employs The Chertoff Group as a consultant to promote sales. If that name is familiar to you, it should be, the President and CEO of The Chertoff Group is none other than former Homeland Security Czar and Secreatry, Michael Chertoff, who first authorized these machines. Chertoff has been criticized by Flyers Rights.org for abusing his former position to promote the scanners.

Let's go back to the Christmas 2009 underwear bombing incident. Umar Farouk Abdulmutallab from Nigeria and on the terror watch list tried to board Flight 253 from the Netherlands to Detroit with absolutely no identification. The Dutch now say that he did have a valid US visa. How does a guy who went to Al-Qaeda summer camp in Yemen get a valid US visa? Eyewitness Kurt Haskell who said he saw the professional man try to convince the ticket counter that he transports poor Sudanese refugees all the time without passports. He says he doesn't know what happened after that, but that there is video of the exchange that is not being released. When Umar's crotch exploded in flame, he appeared as surprised as anyone and did not fight being grabbed and smothered. Here's a really great rundown of this incident from Kurt Haskell, who saw it all go down (emphasis mine):

“Patrick F. Kennedy, an undersecretary for management at the State Department, said Abdulmutallab's visa wasn't taken away because intelligence officials asked his agency not to deny a visa to the suspected terrorist over concerns that a denial would've foiled a larger investigation into al-Qaida threats against the United States.

"Revocation action would've disclosed what they were doing," Kennedy said in testimony before the House Committee on Homeland Security. Allowing Adbulmutallab to keep the visa increased chances federal investigators would be able to get closer to apprehending the terror network he is accused of working with, "rather than simply knocking out one solider in that effort."'

Now it all becomes apparent. Let me detail everything we know about the "Sharp Dressed Man" (SDM).

1. While being held in Customs on Christmas Day, I first told the story of the SDM.

2. My story has never changed.

3. The FBI visited my office on December 29, 2009, and showed me a series of approximately 10 photographs. None were of the SDM. I asked the FBI if they brought the Amsterdam security video to help me identify the SDM, but they acted as though my request was ridiculous. The FBI asked me what accent the SDM spoke in and I indicated that he had an American accent similar to my own. I further indicated that he wore a tan suit without a tie, was Indian looking, around age 50, 6'0" tall and 250-260 lbs. I further indicated that I did not believe that he was an airline employee and that he was not on our flight.

4. During the first week of January, 2010, Dutch Military Police and the FBI indicated that over "200 Hours" of Amsterdam airport security video had been reviewed and it "Shows Nothing".

5. The mainstream media picked up the "Shows nothing" story, which slanders my story. After visiting my office twice for a flight 253 special, Dateline NBC and Chris Hanson indicated that my story was "Unsubstantiated rumor dispelled as myth" and our story did not air during the tv special.

6. On January 2, 2010, I receive a call from a flight 253 passenger who indicated to me that it may be in my best interest to stop talking publicly about the SDM because he believes I am "wrong" in what I saw. He did not make any claim that he saw the SDM boarding gate incident at all. This call was made out of the blue after he made a "revelation" of this event on January 1, 2010. I later discover that this caller has ties to the U.S. Government.

7. On January 20, 2009, current Director of the National Counterterrorism Center (NCTC), Michael E. Leiter, made a startling admission. Leiter indicated that: "I will tell you, that when people come to the country and they are on the watch list, it is because we have generally made the choice that we want them here in the country for some reason or another."

8. On January 22, 2010, CongressDaily reported that intelligence officials "have acknowledged the government knowingly allows foreigners whose names are on terrorist watch lists to enter the country in order to track their movement and activities."

CongressDaily also reported, citing an unnamed "intelligence official" that Michael E. Leiter's statement on January 20, 2010, reflected government policy and told the publication, "in certain situations it's to our advantage to be able to track individuals who might be on a terrorist watch list because you can learn something from their activities and their contacts."

9. On January 22, 2009, ABC News published an article that showed a change of position in the government's official story.

The U.S. government provided no explanation for the reason my story was initially discounted.

10. The SDM could not be from Al Qaeda. When speaking at the counter in Amsterdam, the SDM said the following "He is from Sudan, we do this all the time". Who is "we"? If it is Al Qaeda, you surely don't make such a statement to an airport security official.

11. The SDM could not be from airport security. The SDM did not dress in any security uniform and did not appear to have any security badge. The SDM did not speak with a Dutch accent. The SDM dressed in a suit coat and pants. If the SDM was a higher up security official, he would not have to convince the ticket agent to let Mutallab on the plane without a valid passport. Instead, he would just order her to do it.

13. The Amsterdam security video has not been released. A much more minor airport security violation occurred at the Newark New Jersey airport several days after the flight 253 incident. That video was released shortly thereafter.

14. Senators Levin and Stabenow, as well as Congressman Dingle, all refuse to discuss the matter with me.

With the information we already knew and the admission from the above referenced Detroit News article, we have evidence and claims made by government officials that the U.S. Government wanted Mutallab to proceed into the U.S. in order to obtain information on other terrorists involved with him. Once we take this statement and add it to my eyewitness account of a "Sharp Dressed Man" escorting Mutallab through the boarding process and allowing him to board without a valid passport we can make the connection that the "Sharp Dressed Man" was a U.S. Government official/agent.

The reasoning behind the following events now becomes very clear:

1. The reason Mutallab got through security despite the numerous warnings for months before our flight.

2. The reason why there have been so many lies from the U.S. Government attempting to discredit my eyewitness account.

3. The reason why the Amsterdam airport security video is being hidden from the public.

4. The reason why the government is proposing a "Failed to Connect the Dots" account of the failure. The truth is too damning.

5. The reason why Mr. Wolf of the Obama administration indicated on the Keith Olberman Show that the White House was investigating a possible "intentional act" from within the U.S. Government as the reason for the Christmas Day attack.

6. The explanation for the cameraman and why he hasn't been identified (Obviously, he was another U.S. Government agent) whose job was to film Mutallab for some governmental purpose.

7. The reason for the lax security after landing, which can be attributed to foreknowledge of the possible suspects involved.

8. The reason for the failure to search or secure the plane and passengers after landing, which can also be attributed to foreknowledge of the possible suspects involved.

9. The corporate media's attempt to bury my eyewitness account.

10. Carl Levin's, Debbie Stabenow's and John Dingle's intentional avoidance of my story and failure to return my calls/emails.

11. Janet Naploitano's statement that "The System Worked". From her point of view it probably did as this WAS PART OF THE SYSTEM!

Almost immediately, Homeland has these naked body scanners on order. And you can bet they listed the underwear bombing as their number one reason for needing to expand the use of these scanners. Besides Rapiscan, only the huge defense contractor L-3 is “TSA approved” to supply these scanners. The TSA ordered 150 naked body scanners at a price tag of $170,000 each. No sweat, the Recovery Act of 2009 paid for the whole thing. Poetic, no? I'm sure The Chertoff Group, consultants to Rapiscan got their piece of the pie.

As the months passed, it came to light that naked body images were being saved when the pubic were told that they were not. The pubic was also told that the machines were perfectly safe. Many experts in radiation have said that they are not, putting out as much radiation as a ten cat-scans.

As a result, more people have been opting out of these scans. What has been the response? Instead of patting down resisters using the back of the hands, they're now using their fingers to check airline passengers' genitals. Despite this, how are they supposed to tell if a terrorist has explosive powder imbued in their underwear? The point of this is, of course, to dissuade opting out and force more sheeple through the scanners, making Rapiscan and The Chertoff Group more money. Government and business working together-- what's that called? Oh yes, fascism.