A lethal combination of corruption and criminal gangs fighting for control of a booming heroin trade has turned one two-lane road in Mexico’s Guerrero state into what many call “the corridor of death.”

The road links Chilpancingo, the Pacific Coast state’s capital, to heroin-producing mountains nearby, where rival gangs are vying for a bigger share of the lucrative heroin market in the U.S. Nearly 1,200 people were killed in the state this year through June after 2,200 died last year. Officials say nearly all were linked to organized crime.

The bloodshed largely occurred in poor neighborhoods of the Acapulco and Ixtapa-Zihuatanejo beach resorts and in communities like Chilapa, a town along the deadly corridor where small-plot farmers have long cultivated marijuana and opium poppies for export, alongside traditional crops of corn, beans and squash.

“Chilapa is bathed in blood,” said José Díaz Navarro, a 54-year-old former local schoolteacher who now runs a civic group that tallies the area’s slaughter. “We don’t know who is involved with whom, but the criminals kill anyone for whatever reason.”

Guerrero’s illicit trade has soared over the past 15 years as Mexican drug traffickers have produced more and stronger heroin and marketed it aggressively. Some 90% of the U.S. heroin supply now comes from Mexico, according to U.S. Drug Enforcement Administration estimates. American users in recent years have been favoring heroin over more costly opiates like oxycontin.

The Mexican army has tried for decades to eradicate opium poppies—the raw material for heroin, morphine and other drugs—but struggles to keep up with new plantings. Mexico’s Defense Ministry says plantings have doubled over the past year, often tucked among the heavily wooded slopes and deep canyons of the mountains that run along the country’s Pacific coast, with Guerrero accounting for half the poppy acreage. 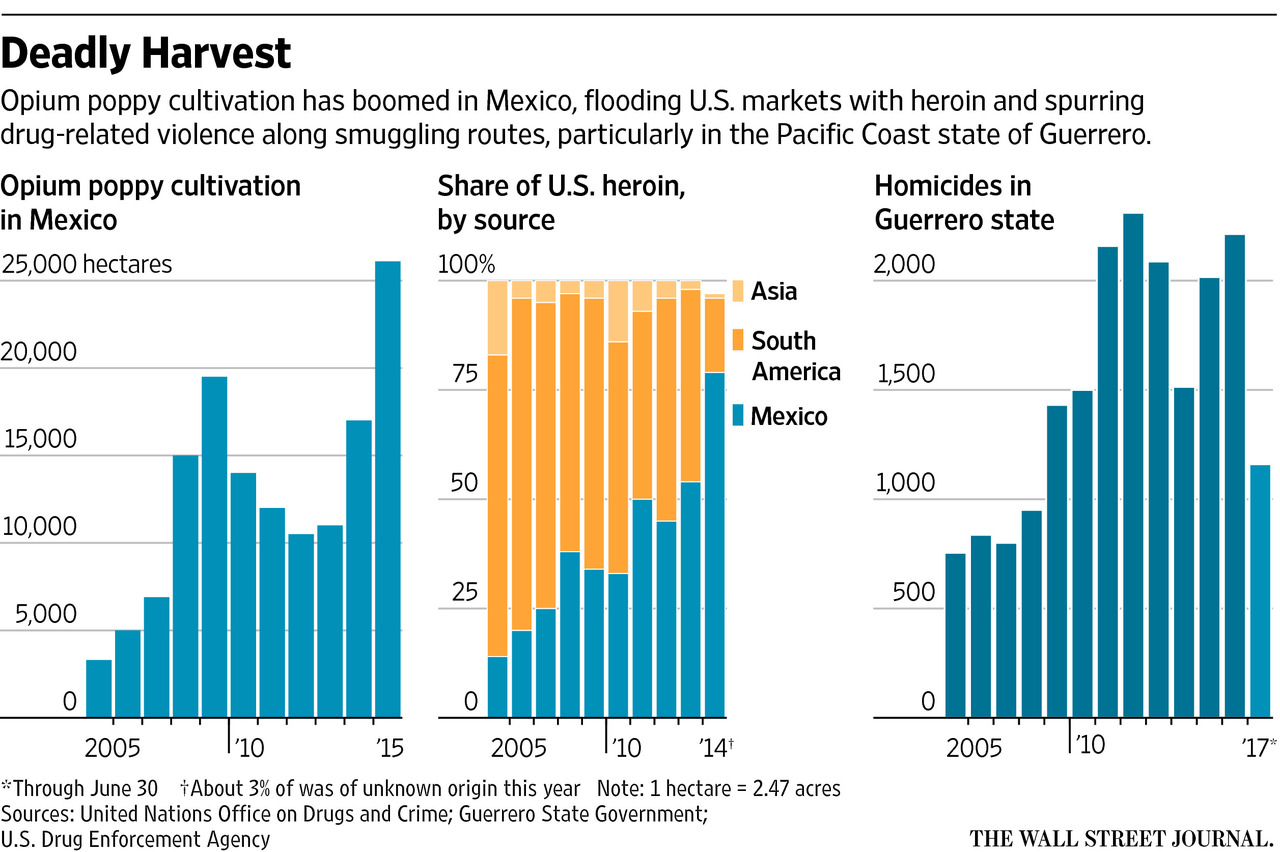 Both violence and the narcotics trade have a long history in Guerrero. The state played a key role in Mexico’s war of Independence from Spain two centuries ago, and was home to a number of armed uprisings in the 20th century.

Historians and political analysts have long dubbed the state “untamed Mexico” for its propensity for lawlessness. But now the fight to supply surging U.S. demand for heroin has poured jet fuel on long-smoldering political and social tensions. Complicit or cowed, local officials and police have proved unable to contain the violence and sometimes abet it, activists say.

Guerrero gained international notoriety three years ago with the disappearance of 43 teacher college freshmen, who officials say were detained by police in Iguala city and delivered to a drug gang. Federal officials arrested Iguala’s former mayor and other officials. These people have denied wrongdoing and haven’t yet been tried. The students were never found and are presumed dead. 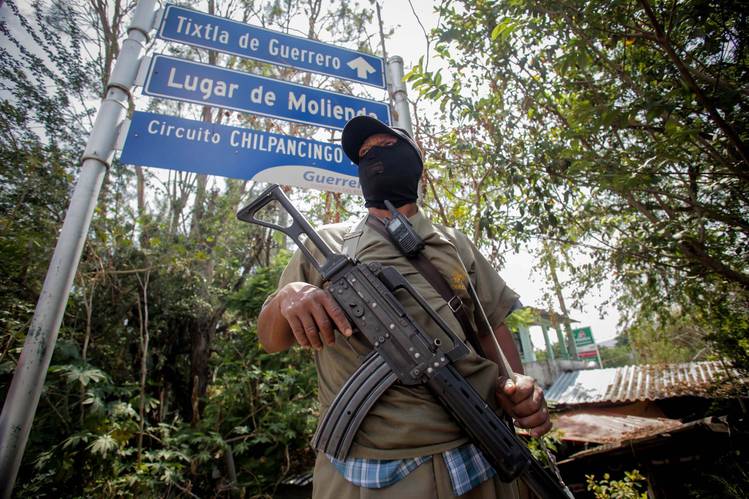 The violence has gotten so out of hand that Guerrero Gov. Héctor Astudillo has called for the legalization of poppy production for medical use as a way of lessening the gangland rivalries. No action has yet been taken on his suggestion.

Chilapa has been especially hard hit, with about 150 residents killed there so far this year, activists say. In one particularly bloody week in March, police recovered the dismembered bodies of five people on a Chilapa street, and three days after that, three bodies were found stuffed into a car on the outskirts of town, said Mr. Diaz, the schoolteacher, citing police records and news reports.

Mr. Díaz became an activist in 2014 after two brothers, a cousin, and two friends of his were abducted and killed in Chilapa. His brothers’ dismembered bodies, minus their heads, were returned to his mother, who died of heartbreak soon afterward, he said. The crimes were never solved.

Few arrests have been made related to the Chilapa killings and still fewer convictions, as witnesses fear testifying for fear of retribution, activists say.

“In many places there are simply no police,” said Roberto Álvarez-Heredia, the public security spokesman for Guerrero state. “Well, the police exist, but they don’t act.” 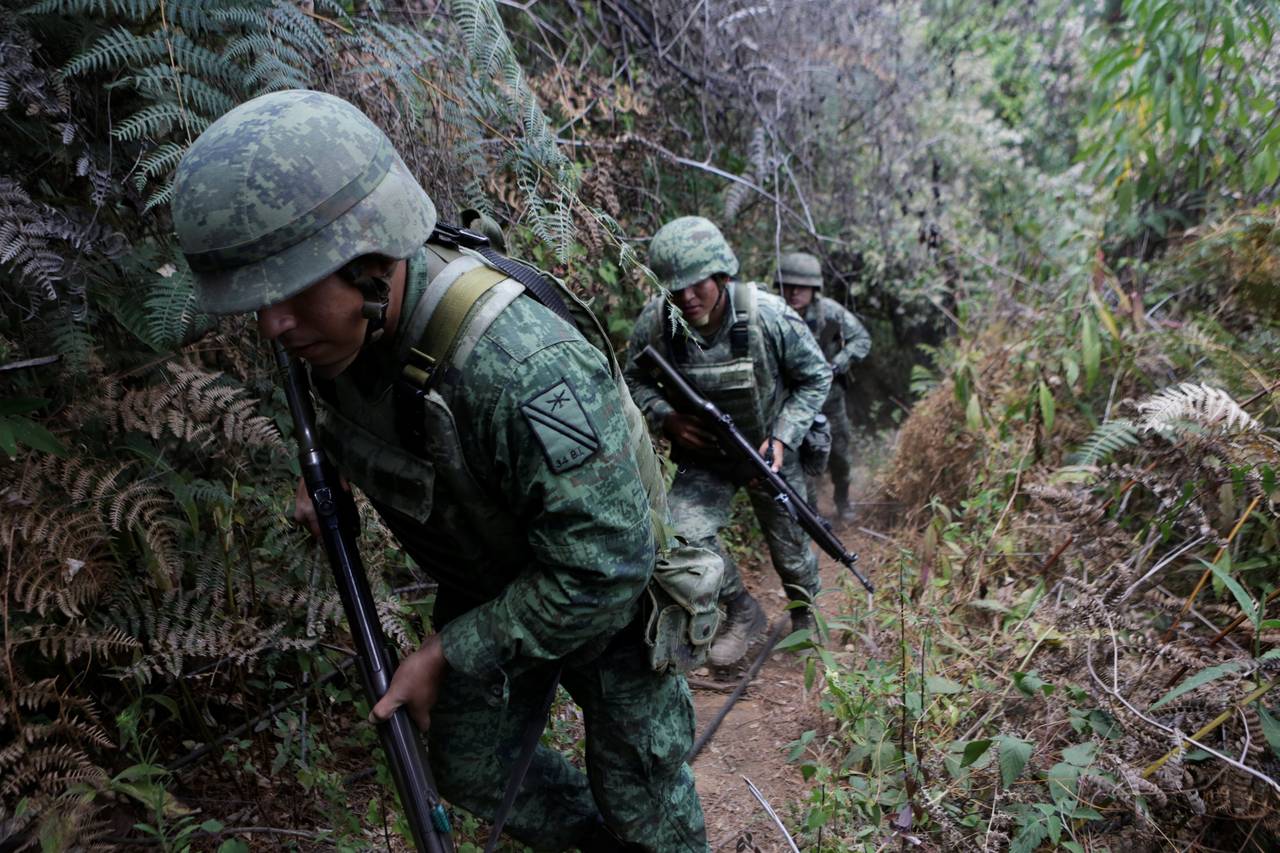 Security officials and analysts largely blame the bloodshed of recent years in part to a breakdown in control of Guerrero’s underworld following the 2009 killing of reputed Sinaloa Cartel boss Arturo Beltrán Leyva by Mexican marines. They say the Beltrán Leyva organization had kept violence in check with a tight hold on the state’s narcotics markets. Former Beltrán Leyva lieutenants now lead many of the current gangs.

With local police largely untrustworthy, and state and federal security forces stretched thin, citizen militias armed with shotguns, pistols and assault rifles have sprung up to patrol rural roads and villages. Mr. Díaz and other critics say the many of the militias are themselves allied with criminal gangs.

“We’re here because the people demanded security,” said Nolberto González, a 40-year-old lawyer who commands one armed group in the village of Buenavista on a main highway leading to Acapulco.

What the militias don’t do is interfere with the local drug trade. “Almost everyone in the mountains is dedicated to growing poppies,” Mr. González said. “We don’t interfere. We think it’s a health problem that pertains to the federal government.”