As this article points out, trust decline's as the years progress. Looking at immigration, America becomes more "diverse" each year because of mass non-White immigration which is rapidly altering demographics. Diversity creates less trust. When asked for a study to prove this, send your liberal friends Robert Putnam's study who said diversity has a negative impact on social capital, leading to people "hunkering down," and trust in strangers and neighborhoods dropping significantly. Robert is a Harvard political scientist so your liberal friends won't cry racism.

Ethnically homogenous societies have more trust, which is clearly visible in Scandinavia, Japan and America in the 50s.

Here's the article from marketwatch.com

It’s been said that “learning to trust is one of life’s most difficult tasks,” and that’s proving to be the case in the United States when it comes to trusting our neighbors.

Unless you’re wealthy, white and older.

According to a Pew Research Center study, only 52% of Americans say they trust all or most of their neighbors, while 48% say they trust some or none of them.

The differences in trust levels are stark when broken down by demographics.

Here are the full results: 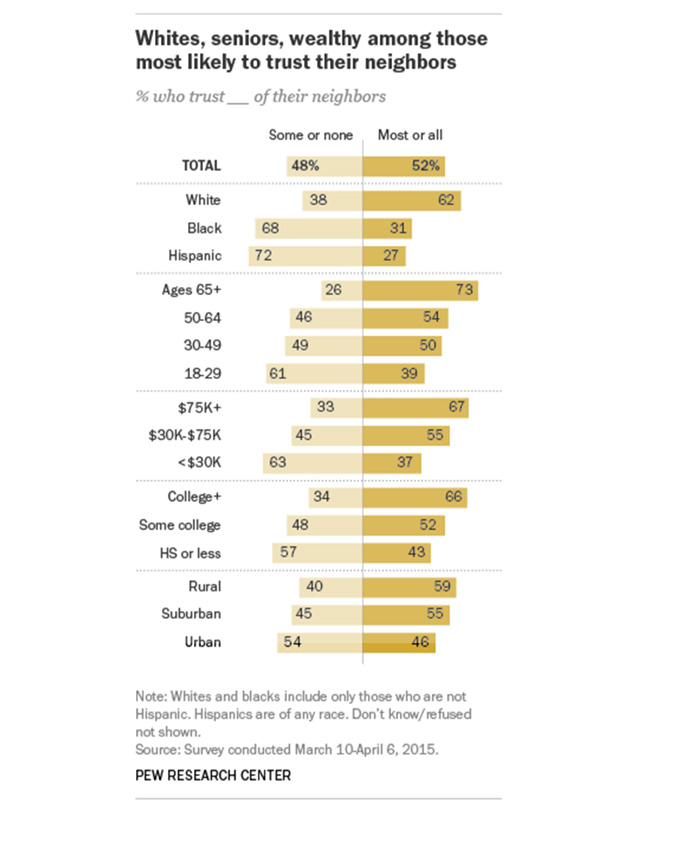 It’s not just about money, though. Six out of 10 white people say they trust their neighbors, while only 31% of blacks and 27% of Hispanics say they do.

“While whites as a group are wealthier than blacks and Hispanics, there are still gaps in trust between whites and nonwhites of the same income brackets,” Pew’s George Gao concluded.

Age is also a factor. The younger generations are less likely than older Americans to trust their neighbors, and this is true even when accounting for income differences.

Overall, people in this country seem to have grown less trusting. As this animated graphic shows, it’s been a downward spiral going all the way back to 1972.

And not surprisingly, the social fabric tends to fray amid distrust. According to the General Social Society, less than half of the people polled said they spend social evenings with neighbors at least once a month. That number was up at 61% in 1974.