Jan 25, 2016
Andy Nowicki lives and works in Savannah, Georgia as the assistant editor of the online magazine, Alternative Right. Nowicki is also the author of several books, including “The Columbine Pilgrim,” “Heart Killer,” “Confessions of a Would-Be Wanker,” “Considering Suicide” and “Notes Before Death.”

Andy is with us to talk about his latest book, “Conspiracy, Compliance, Control and Defiance,” which he describes as a meta-conspiritual analysis of the nature of power and the contemporary ruling class. We discuss the connotative meanings of the term “conspiracy theory” and the idea that people who ascend to the top are typically the most prone to ruthlessness and backstabbing. We consider how events like 9/11 and Sandy Hook have been meticulously exploited to push certain agendas that further a totalitarian regime. Andy gives his perspective on what it’s like to be a “closet truther” questioning the reality of the mainstream portrayal of tragic events, and eventually realizing the sheer magnitude of evil that is at play. Then, Andy defines the characteristics of what he calls “our Reptilian rulers,” who have the capacity to commit crimes against the innocent with a terrifying degree of cold-blooded malevolence while still being revered as upstanding leaders. We get into the sophisticated game of manipulation that our top politicians have mastered and polished to perfection, albeit at times stupendously failing.

In the members’ segment, Andy continues on the nature of the reptile, how we can understand what we’re dealing with, and what can be done. He draws some distinctions between the common sociopath and the reptilian, both of whom display a definitive lack of love, conscience and remorse, but the latter demonstrating an ambitious lust for power and an active, sadistic desire to prey upon and hurt others. We discuss the R-complex part of the triune brain and the theory that sociopathic leaders associate more with this primal, calculating and sometimes unpredictable operating center. Then, we discuss how marketing and propaganda is designed to appeal to the reptilian brain, and we consider how difficult it is for the average person to first find the time and then the drive to wade through the mountains of conspiracies that are engineered to create confusion. Later, we focus on the great divide that exists within the Alt Right concerning conspiracy theories, and we emphasize the importance of setting aside particulars to clear the way for a mission of truth and perseverance that will break the cycle of the West’s current cultural decline.

Conspiracy, Compliance, Control, and Defiance: a primer on what is, and what is to be done 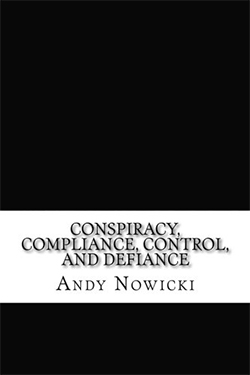