Mar 21, 2014
Mark Weber is an American historian, author, lecturer and current affairs analyst with a specialized knowledge of US foreign policy, international relations, the Second World War, and, more broadly, of twentieth-century European and American history. Weber is also director of the Institute for Historical Review, an independent, public interest research and publishing center in southern California. In 1988 Weber testified for five days in Toronto District Court as a recognized expert on Germany's wartime Jewish policy and the Holocaust issue. In the first hour, Mark talks about a known terrorist group - the Jewish Defense League – who for 3 months impacted IHR's finances by shutting down the Institute's processing of credit card orders and donations. Behind the shutdown was Dov Hikind. We'll discuss the monopoly and blatant double standards of Jewish organizations such as the JDL, ADL and SPLC. Then, Mark talks about the dangers of applying morality to politics, used to justify war and takeover. Weber also speaks about current ethnic and culture clashes, although we're being told these are just superficial constructs. In the second hour, we'll discuss the situation in Ukraine. Weber shares his perspective on the situation. Next, we'll talk about Germany's role in the EU. Weber talks about Germany's current climate and we look back to WWII. Was there a conspiracy to crush Germany? Mark talks about Winston Churchhill's involvement, the European balance of power at that time and those who wanted to destroy the strength of the German people. We also hear about the horrific bombing in Dresden that massacred thousands of innocent Germans and how it was justified. Innocent German women were also raped and beaten by Western and Soviet soldiers. Weber explains the propaganda version of "the good war." We end the hour on America's military industrial war complex and its worldwide reach into foreign policy. Mark talks about America's abstract ideas that have no interest for Americans and how the US is now exporting ideologies, such as gay rights, with no respect for other cultures or policies. 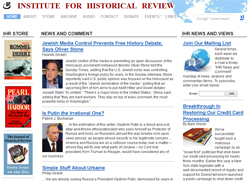