Nov 18, 2015
Mark Weber is an American historian, author, lecturer and current affairs analyst with a specialized knowledge of US foreign policy, international relations, the Second World War, and, more broadly, of twentieth-century European and American history. Weber is also director of the Institute for Historical Review, an independent, public interest research and publishing center in southern California. In 1988 Weber testified for five days in Toronto District Court as a recognized expert on Germany's wartime Jewish policy and the Holocaust issue.

Our conversation begins with a brief overview of the recent deadly events in Paris and the intensifying conflicts Europe has endured thanks to the EU’s undying championing for diversity and tolerance. Mark gives a historical perspective on the growth of ISIS by focusing on the disruption caused in the Middle East by US powers in their lunatic pursuit of importing an alien form of government into a region with starkly contrasting cultural and religious standards and outlooks. We discuss Israel’s interests in creating mass chaos and disorder among ME countries, along with its conflicting relationship with the US. Mark says the hypocritical policies and alliances formed by the US have all but nullified its guiding ideology. Then, we bring our focus to the cultural suicide that Europe has set into motion as multiculturalism becomes its new religion. We look at the profound racial differences of Islam that are being infused into the national fabric of Europe, as leaders in their morally superior display of tolerance systematically divide this once cohesive civilization.

In the members’ hour, we shift back to Paris and the many dimensions of war that have readied the Western stage for a dramatic battle with the Middle East. Mark emphasizes the role of society, its leaders, the educators and the media in supporting policies that have led to this social breakdown and chaos. We consider factors unique to multicultural societies that result in alienation, mistrust, and resentment, producing extremist radicals looking for somewhere to belong. Furthermore, the normalization of violence and the institutionalization of White guilt has created a battleground ripe for the dispossession of Europeans. Later, we discuss the upside to all the chaos being created by the refugee crisis, which is shaping up to be the shakeup the West needs to bring forth a revolution. 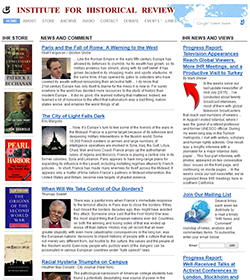