Lynn Picknett is a writer, researcher, and lecturer on the paranormal, the occult, and historical and religious mysteries. Lynn and Clive Prince authored The Templar Revelation: Secret Guardians of the True Identity of Christ inspired the New York Times bestsellers The Da Vinci Code and The Secret Supper. Lynn joins us to discuss, The Secret History of Lucifer, the sequel to Mary Magdalene: Christianity's Hidden Goddess. We’ll discuss what the spirit of Lucifer represents and what principles it has brought to the world. Lynn talks about the murky areas between good and evil and the symbiotic relationship between Christianity and Satanism as well as the myth of Yahweh. We’ll discuss myths about the fall of Lucifer, associated with the Morning/Evening Star, or Venus. Picknett explains the female aspect of Lucifer, Venus Lucifera and the goddess Diana, whose title was Lucifera, the Lightbringer. She’ll also talk about male monotheism and the ruthless undermining of the Feminine and medieval churchmen who were fanatically determined to root out what they perceived as female evil in the witchcraft hysteria. Lynn also talks about Mary Magdalene as the power behind Christ’s throne. Later, we discuss claims of the ruling elite being Satanists.

picknettprince.com
Lucifer - Where did the Word come from and what is its True Meaning?
The Birth of Venus
The Comet Venus
The Devil worshippers of Iraq
Return of the Devil's Bible to Prague Draws Crowds of Curious Czechs
The Luciferian Legacy
Vatican tied Mount Graham Observatory launches LUCIFER Telescope

The Secret History of Lucifer: And the Meaning of the True Da Vinci Code
The Forbidden Universe: The Occult Origins of Science and the Search for the Mind of God

The Masks of Christ, John The Baptist, The Stargate Conspiracy & New Age Religion 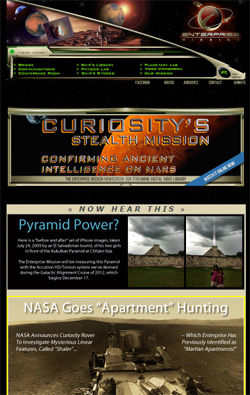