Sep 28, 2015
Dr. David Duke is a graduate of Louisiana State University with a BA in History. He pursued a PhD in the largest university in Ukraine and in 2005 completed his Doctoral Defense in Kiev. Duke is a former member of the House of Representatives from Louisiana and is the author of the books “Jewish Supremacism,” “My Awakening” and “The Secret Behind Communism.” Duke returns to the Red Ice to pick up on the recent Radio 3Fourteen broadcast that focused on the preservation of European people, values and culture, understanding human diversity, and recognizing the opposing occupying enemy force of Zionism.

In the first segment, we evaluate the ongoing migrant surge into Europe and the destructive impact of this unprecedented invasion. David explains how this mass movement of people across European borders essentially equates to genocide, and he points to the very un-European Globalist tyrants in power, aided by the Zionist corrupted media, as the ultimate evil force driving towards the annihilation of European people. We talk about the irrefutable presence of Israel at the core of the war crisis in Syria, along with other notable Middle Eastern conflicts that have resulted in major population displacements. David highlights the hypocrisy of Israel Prime Minister Benjamin Netanyahu’s refugee policies, making special note of the power the small Jewish faction has in pushing forth damaging immigration policies for the West. We look back to 9/11 and the US bombing of Afghanistan – events that mark a major transition to the Israeli supremacist ideal of multi-ethnic states for all, except for Israel. Further, David calls attention to the destruction and murder carried out by radical Zionists throughout history. We discuss the demonizing programming of the global media that has created a vicious, European-hating culture, and David emphasizes the need for understanding the overall divide and conquer tactics of the current immigration invasion.

In the members’ section, we get into recent mainstream events that have brought attention to Israel’s standing at the helm of global power, and we consider how Jews, who represent only 0.2% of the world’s population, manage to occupy a vast number of positions in US government and the banking industry. David reports on some of the racially prejudiced content found in Jewish tribalist publications, along with the open boasting of their leading role in organizations and movements that undermine the family friendly culture of Europe. Then, we look at how to cleanse ourselves of the evil portrayal of European interests and promote a rhetoric based in the true sense of human rights. At the end, David talks of flipping the lexicon back against our enemy and creating an opposition that speaks to European morality and survival. 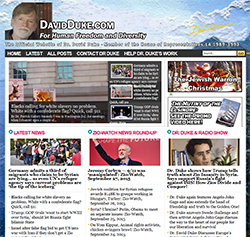