Dr. David Duke is a graduate of Louisiana State University with a BA in History. He pursued a PhD in the largest university in Ukraine and in 2005 completed his Doctoral Defense in Kiev. He is the author of the books “Jewish Supremacism,” “My Awakening” and “The Secret Behind Communism.” Duke, a former member of the House of Representatives from Louisiana, is currently running for US Senate.

We begin by briefly touching on Dr. Duke’s return to American politics. He has chosen to run for a number of reasons, including the current awakening taking place among ethnic Europeans in America and the rise of Trump. Duke reminds us that our current plight – namely, that we are being demographically replaced by hostile foreigners – proves that he was correct all along. We then discuss the insanity of modern liberalism and the divisive nature of multiculturalism. Dr. Duke also points out that the egalitarian rhetoric offered by our elite is nothing more than a weapon to destabilize the West and further consolidate power into their hands – as was the case in Communist Russia. We conclude the first hour by talking about the left’s efforts to create a non-White voting bloc, black-on-White violence, and America’s disastrous foreign policy.

In the members hour, we explore the volatile state of race relations in America. Dr. Duke reminds us that, unlike previous threats to the West, our current predicament can be solved peacefully and humanely via the political system. As such, it is of the utmost importance that Dr. Duke is elected.We then discuss the hypocritical nature of identity politics in America. White Europeans, despite being the founding ethnic stock of America, are forbidden from explicitly advocating for their interests; non-Whites, however, are allowed to engage in ruthless ethnic competition without facing any social repercussions. We talk about the fact that supporting Trump – who represents non-White people implicitly, not explicitly – carries such a stigma that many people, such as academics, cannot support him lest they risk ruining their careers. In light of this, Dr. Duke proposes introducing legislation to outlaw discrimination based on political views. Finally, we wrap up by discussion how America has changed for the worse over the past few decades; Dr. Duke, however, remains optimistic that positive change is on its way. 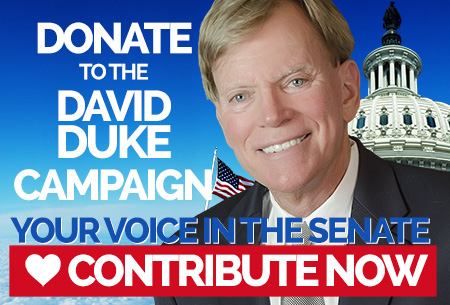