May 11, 2015
Neil Kramer is a British philosopher and esotericist. His work focuses principally on spirituality, mysticism, and metaphysics. He explores the relationship between inner development and the many social and cultural factors that influence our everyday lives by drawing attention to embracing truth, confronting the negative, and transforming self. Neil returns to Red Ice Radio to pick up on our last discussion on tribal heritage, taking the concept a bit further to include problems that stem from misconceptions about human rights, the promises of equality, and self-censorship. Neil defines what he calls the Empire, or the system that is set against the growth of man, and outlines the importance of recognizing that these entities are designed to be part of our spiritual development. We consider the media’s focus on race, migration, sexual orientation and equality and how these headlines have been formulated to invoke division and polarization amongst tribes. Neil draws connections from the formation of the UN’s 1946 Commission on Human Rights to the current policies that appear to champion freedom and wellbeing, but ultimately seek to condition people to believe in an unnatural sense of sameness and uniformity amongst individuals and across cultures. Neil emphasizes the primary meaning of discrimination, a word that has been used to prevent people from making moral observations or expressing any sort of disapproval. In the second segment, we take a closer look at the war on individuality that has been dramatically reshaping our natural sense of belonging and diversity since WWII, and the destructive forces that enter the vacuum created by the disavowing of will and power. Further, Neil elucidates the general principles of preciousness and sacredness and following one’s own heart. Later, we talk about the significance of knowing one’s ancestral relationship to the lands and distinguishing the incredible healing powers that certain atmospheres provide. Our conversation closes on the ideas of transmutation and of living life as a sovereign entity of divinity in connection with real wisdom and authenticity.

The Unfoldment: The Organic Path to Clarity, Power, and Transformation
The Audio Cleaver
DVDs

Imperial Culture vs. Tribal HeritageThe Journey of Divine Will & The Path of the IntrovertParticipating in the Unfoldment, 4D Beings & Divine WillEpisode 4 - Symbolism in LogosOwning the Dystopian Daydream, Artificial Constructs & The Control SystemThe End of the Fourth Age, Paradox, Sorcery & FearThe Gates of Awakening & Polarity of ConsciousnessAwakening, Eschatology, Entheogens & Maslow's Pyramid 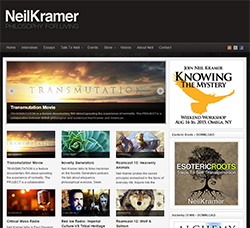