F. Roger Devlin, Ph.D. is an independent scholar. He is the author of "Alexandre Kojeve and the Outcome of Modem Thought" and many essays and reviews in such publications as The Occidental Quarterly, American Renaissance, Counter-Currents, VDare and others. Roger joins us for a discussion on the subject of his latest book, "Sexual Utopia in Power," which is based on a number of different essays he has written throughout the years. Roger begins by laying out some of the utopian ideas that were propagated by magazines like Playboy and Cosmopolitan and became the backdrop for the sexual revolution of the 1960s. We look back to the roaring 20s, when divorce became fashionable and traditional viewpoints on morals and marriage were slowly beginning to shift. Roger explains how the selling of women as a utopian vision of sexuality was done for money by some and as a conscious effort to undermine American society by other revolutionaries coming out of the Frankfurt school. We look at the structure of herds and mating patterns in nature, and the common misconceptions that the sexual liberation of women equals more sex for men. Devlin criticizes the mainstream conservative responses to the sexual revolution, which often point to predatory men taking advantage of innocent women. He emphasizes that women have indeed been targeted with the propaganda of unconstrained sexuality, placing them in the position to control the supply and demand of sex, and therefore responsible for changing their behavior in order for societal problems to improve. Further, Devlin argues that the feminist revolution is a byproduct of the prosperity and increase in leisure time women have enjoyed since the industrial revolution, not because of oppression or mistreatment by men. In the members’ section, we jump into the hoopla of the legalization of gay marriage, the consequences of same-sex parenting, and the assault on free speech and freedom of opinions. Then, we look at how the former system of a "family income" has been replaced with "equal pay for equal work" and the disintegration of the male provisioning instinct. Roger speaks to the importance of women marrying and having children early in life, and he ties women competing in the workplace to high divorce rates. We finish the conversation by touching on the instinctual female attraction to dominant men, along with the recent frenzy over portrayals of female masochism.

I Am Woman - Helen Reddy 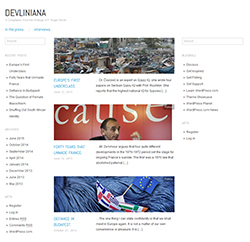